How to Make the Most Out of 48 Hours in Edinburgh, Scotland 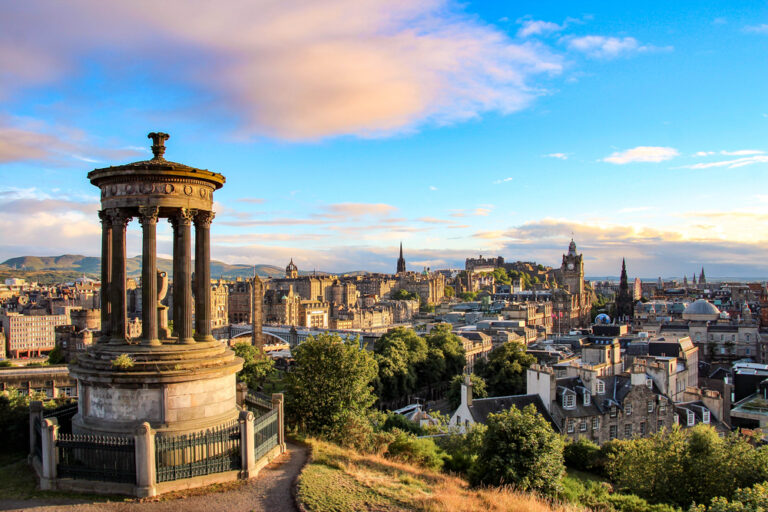 Featuring various intriguing attractions and lots to do, the capital city of Scotland is well worth a visit for tourists with a range of interests. Unlike many capital cities, Edinburgh is fairly small — making it even more inviting to explore by foot for a full Scottish experience. With its abundance of history and culture, fitting everything Edinburgh has to offer into 48 hours can be quite a challenge, so we’ve created the most optimal itinerary to make the most of your trip! Whether you’re visiting Edinburgh for the weekend or squeezing in a short trip there during your UK getaway, read on for our top recommendations.

You can reach Edinburgh easily using various modes of transport. Just off the A1, it’s a fairly straightforward road trip from almost anywhere in the UK. If you’re traveling by train, there are usually up to 40 services a day from London Kings Cross — which should take you just over four hours for a direct journey.

You also have the option to fly to Edinburgh for a faster journey. Many flights to Edinburgh Airport are available from London Gatwick, London Stansted, or London Luton via various low-cost airlines like EasyJet and Ryanair.

There’s lots to do in Edinburgh throughout the day. Here’s how you can spend day one of your two-day vacation to Edinburgh.

Start your trip off with some of Edinburgh’s most iconic sites, beginning at the beautiful Palace of Holyroodhouse and meandering up the Royal Mile, until you reach the majestic Edinburgh Castle. 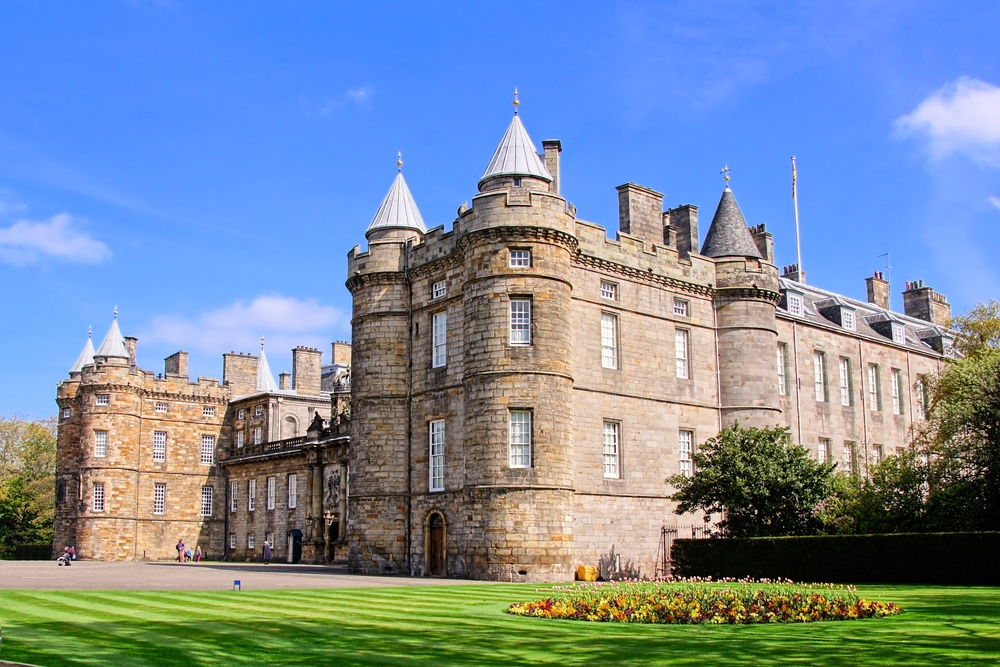 At the base of the Royal Mile, the Palace of Holyroodhouse is truly a sight to behold. Built in 1532, Holyrood Palace has been the royal residence of the monarchy since 1837, when it replaced Edinburgh Castle as their preferred Scottish base. Visitors can explore the house, and discover the close associations to notable Scottish figureheads, such as Mary, Queen of Scots.

You can also find out how Queen Elizabeth II uses it today to carry out her official royal duties in Scotland. The Palace is open seven days a week during the summer, and features a shop and café where visitors can indulge in some British tea and buy souvenirs amidst the scenic surroundings. 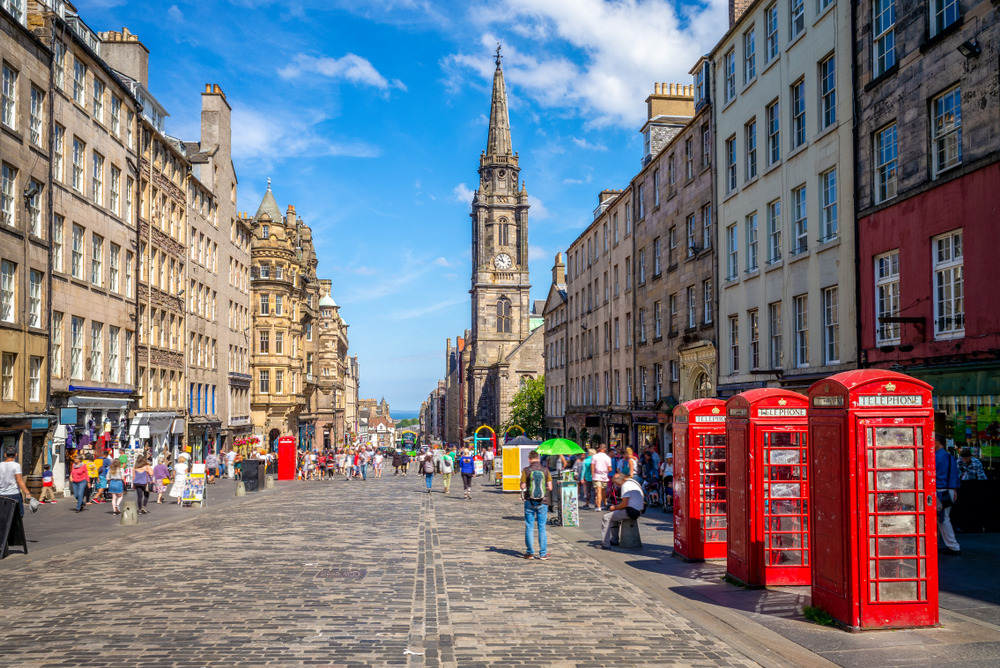 After exploring the Palace, wander up the hill to the iconic Royal Mile. A mile-long, picturesque cobbled street for pedestrians in the Old Town, it’s Edinburgh’s main street, linking Edinburgh Castle at its east end to the Palace of Holyroodhouse on the west end. The Royal Mile has a long history as one of Scotland’s most important streets, and was originally designed as an avenue for walking and riding horses from the Castle down to Holyroodhouse.

Today, it is one of the busiest shopping streets in Edinburgh and a must-see destination for tourists visiting the city. It’s littered with quaint cafes and souvenir shops to explore along the way. 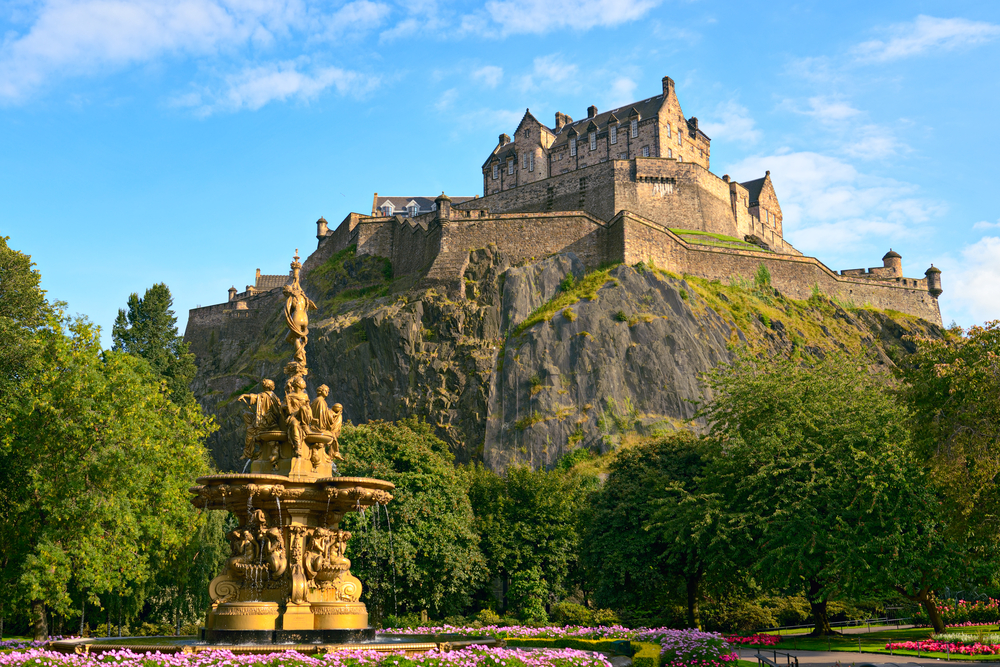 At the top of the hill, overlooking the city, is Edinburgh Castle — one of the most iconic buildings in Scotland. Sitting on the aptly-named Castle Rock, it offers spectacular views of the city. Built in the 11th century, the Castle has a long and prestigious history, and was used as a royal residence until 1837.

Visitors can explore the interior and exterior of the castle. One of the highlights is the Crown Room, home to the oldest Crown jewels in the British Isles — originally used for the crowning of Mary, Queen of Scots in 1543.

In the afternoon, wander back down the Royal Mile, stopping at St. Giles’ Cathedral and the National Museum of Scotland. 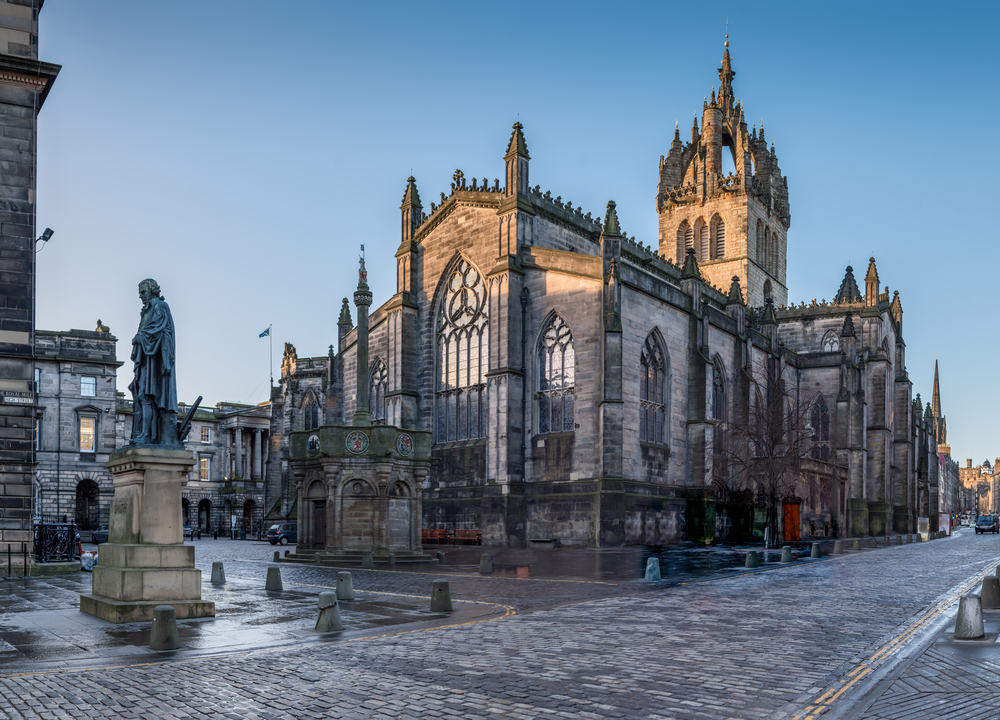 For centuries, St. Giles’ Cathedral has been a focal point of Edinburgh, with its crown steeple dominating the skyline from all angles. Today, visitors can enjoy various events hosted at the cathedral, including:

The National Museum of Scotland 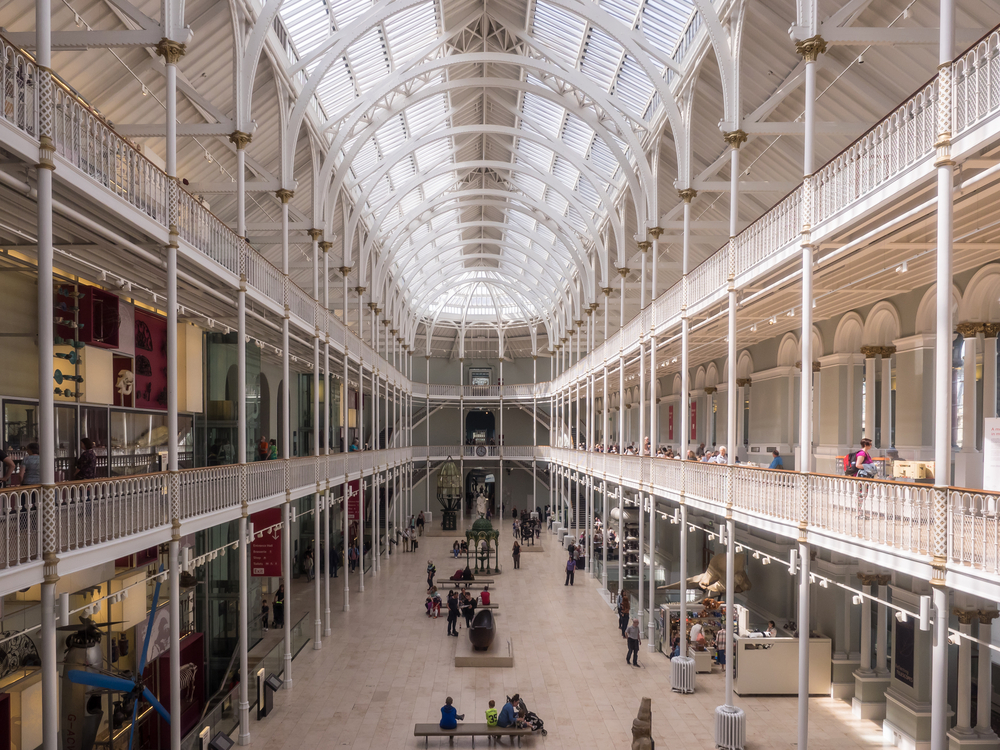 A must-visit for any history, culture, or art fans, the museum showcases the best of Scottish culture and art through its collections, exhibitions, and programs. You’ll find a vast collection of paintings, drawings, prints, photographs, textiles, and costumes from many different cultures all over the world. With one million objects that represent archaeology across the globe, the museum is well worth the visit.

In the evening, head over to the historic Grassmarket for an evening of fun and laughs. 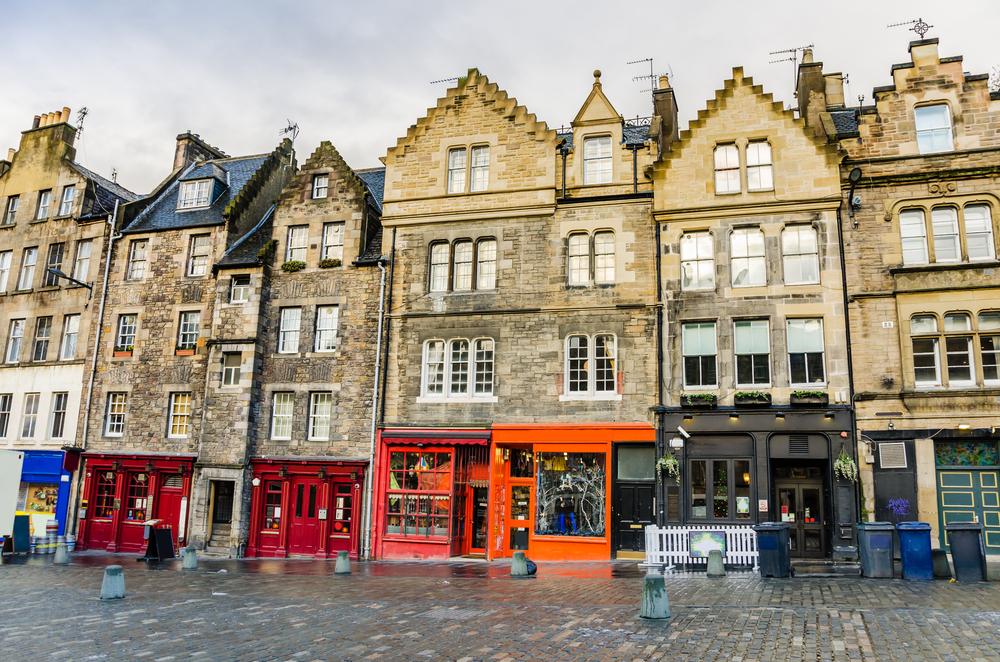 The Grassmarket is a historic marketplace in Edinburgh, located beneath the castle — just around the corner from the Royal Mile. It is a public square bounded by the High Street to the north, the George IV Bridge to the east, and Cowgate to the south. This area forms a focal part of Edinburgh’s Old Town.

With its origins descending from medieval times, the area takes its name from its former use as a field where the grass was grown for fodder among other purposes. It was also used as an area of execution for condemned criminals up until 1753.

Today, Grassmarket is one of the most vibrant and lively areas of Edinburgh. It’s home to some of the best restaurants, bars, and entertainment the city has to offer. After some delectable food and drink, stop by at The Stand Comedy Club. Established in 1995, it features a varied programme of contemporary comedy featuring comedians from all across the world.

Enjoy the second of your two days in Edinburgh exploring some of the appealing attractions below.

Kick off day two the right way with an early outing to soak in the beautiful scenery from Arthur’s Seat and explore historic forts dating back millions of years. 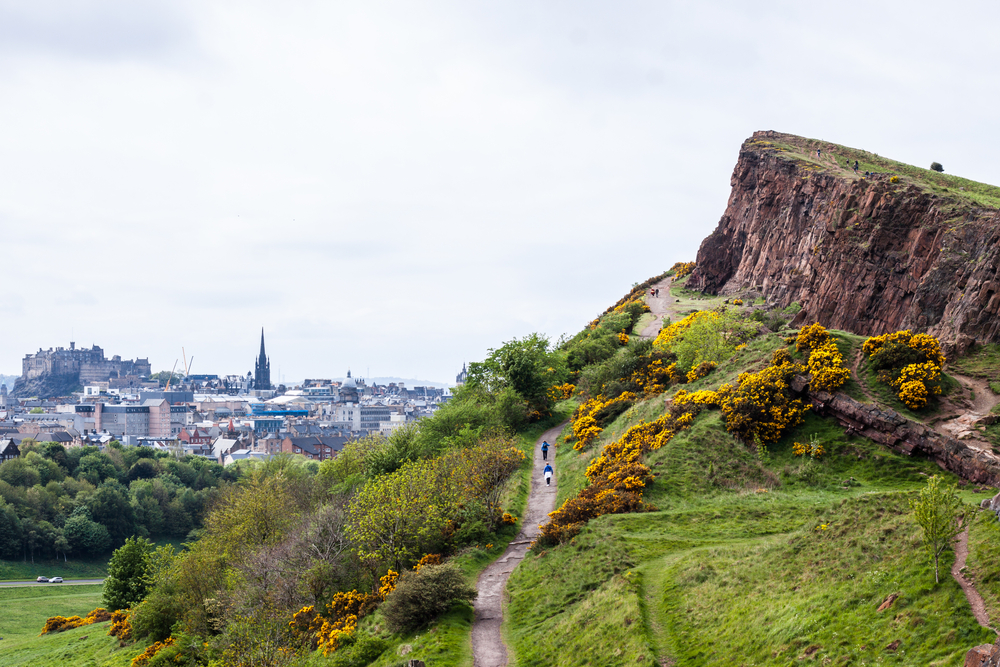 Arthur’s Seat is arguably the best place in the city to watch the sunrise — we promise, the early wake-up call is worth it. The ancient, extinct volcano is located within Holyrood Park, about a mile east of Edinburgh Castle, and offers some of the most breathtaking views on the land. The volcano is approximately 250 meters high and it takes approximately 45 minutes to scale, making it perfect for a morning hike with friends or family.

On the summit of the hill lies a fort, believed to have been the center of power for the Votadini — a Celtic tribe dating back to 600 AD. Other defenses are clearly visible around the main massif of the mountain at Dunsapie Hill and above Samson’s Ribs. These forts are said to date back to the Prehistoric era!

After an energetic morning walking up the most iconic mountain in Edinburgh, why not spend the rest of the afternoon relaxing in the picturesque Princes Street Gardens? Here you can explore the National Galleries of Scotland and wander around the quaint West End Village. 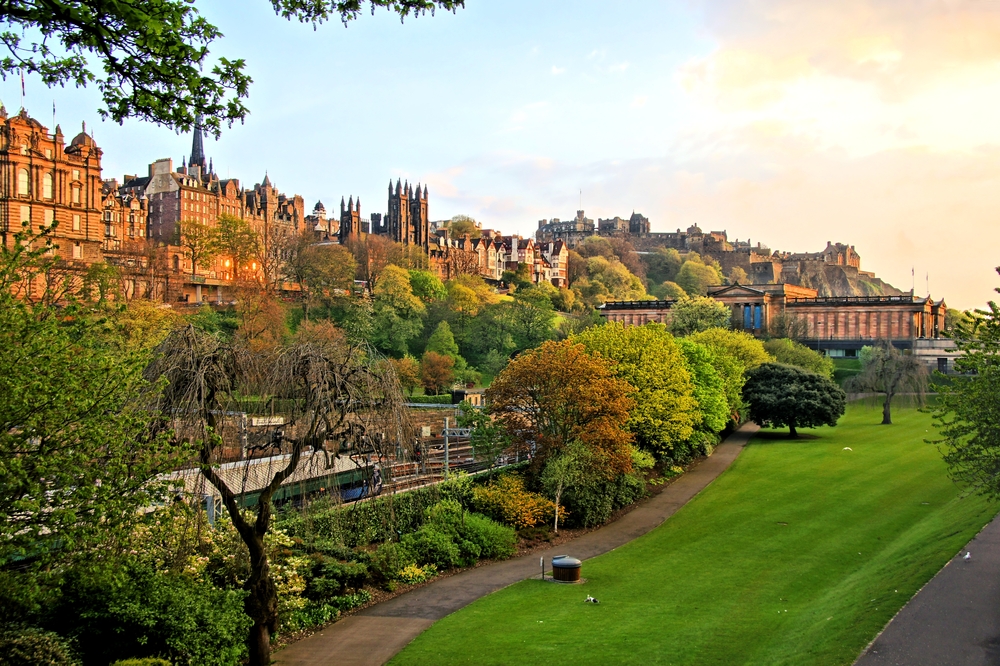 Princes Street Gardens is a beautiful park in the center of Edinburgh. Home to many varieties of flowers and plants, the park also features a wide variety of wildlife and birdlife. It was formally established in 1820 after the North Loch was drained, and today serves as the physical separation dividing the Old Town from the New Town. The park covers a 37-acre area and features numerous attractions, including the Scottish National War Memorial and Scott Monument. The gardens were originally laid out by William Bruce, an architect who was also responsible for designing Edinburgh Castle. They’re open to the public all year-round and offer visitors a great opportunity to enjoy some peace and quiet amidst the busy city. 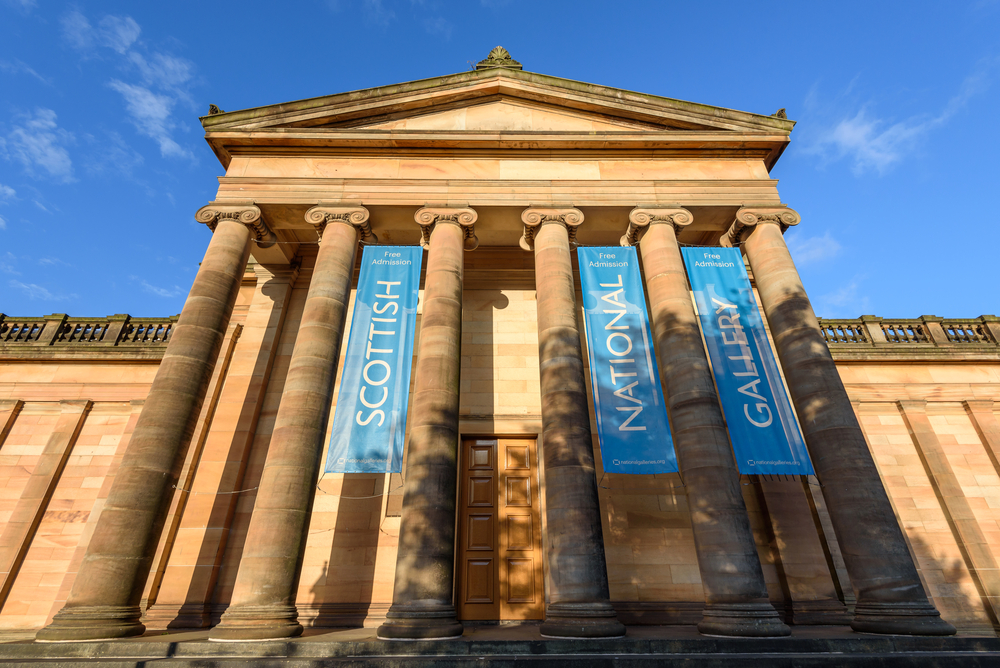 Within the Princes Park Gardens lies the National Galleries of Scotland, founded in 1859 by a group of artists who wanted to promote and preserve their work. It’s housed in three buildings — two historical buildings and one modern extension — all within the city’s UNESCO World Heritage Site. These buildings are the Royal Scottish Academy Building, Scottish National Gallery, and Scottish National Portrait Gallery respectively, where visitors can enjoy a range of guided tours.

You can then round out the afternoon with a visit to the scenic West End Village. Hidden behind Shandwick Place, the Village is one of Edinburgh’s hidden gems, featuring a wide variety of stylish boutiques and exciting bars to wind down the afternoon. The group of shops and restaurants that form the West End Village are fully supportive of the #ForeverEdinburgh campaign, which backs many independent retailers in the city and actively encourages others to shop locally.

What better way to spend your final evening in Edinburgh than engaging in the city’s rich tradition of theater and performing arts? Aside from being the capital of Scotland, Edinburgh is also the center of Scottish arts and culture. There are numerous theaters throughout the city regularly hosting plays and shows with enough variety to satisfy a range of preferences.

One such theater is The Royal Lyceum Theatre. Built in 1883, the Royal Lyceum was once the residence of famous Shakespearean actor Henry Irving. The theatre holds various performances and events throughout the year, and has become an integral part of Edinburgh’s cultural landscape. 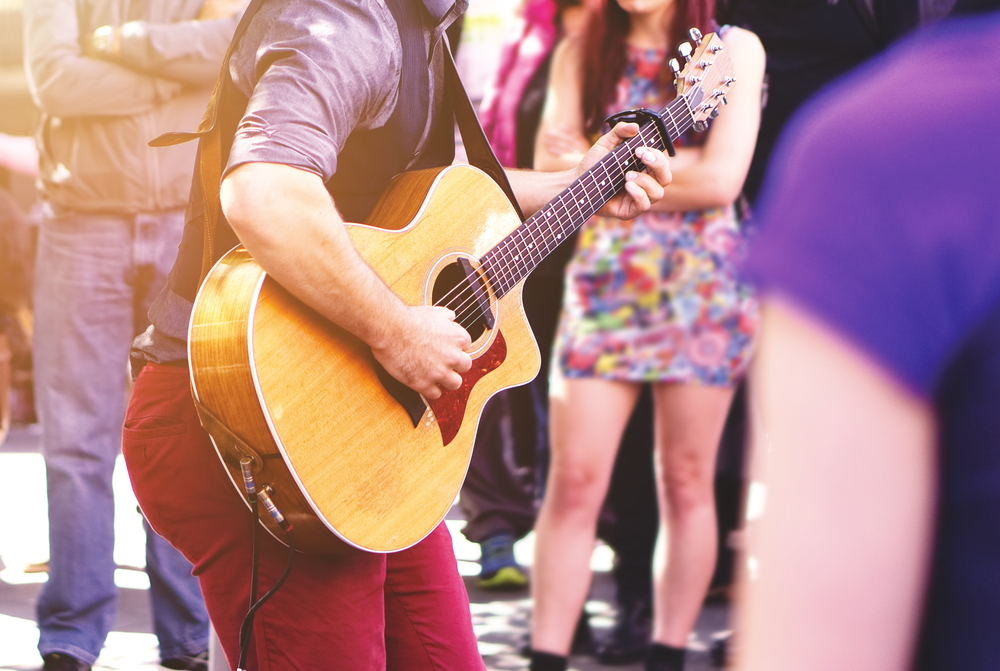 If you’re visiting in the summer months, be sure to catch the annual Edinburgh Fringe Festival — an international festival for arts, culture, and creativity that takes place in the city every August. Founded in 1947, the festival was originally created as an alternative to traditional theater productions typical at this time of year. Today, it’s one of the biggest art festivals in the world, with more than 3,000 productions and shows to choose from.

Experience the Rich History of Edinburgh 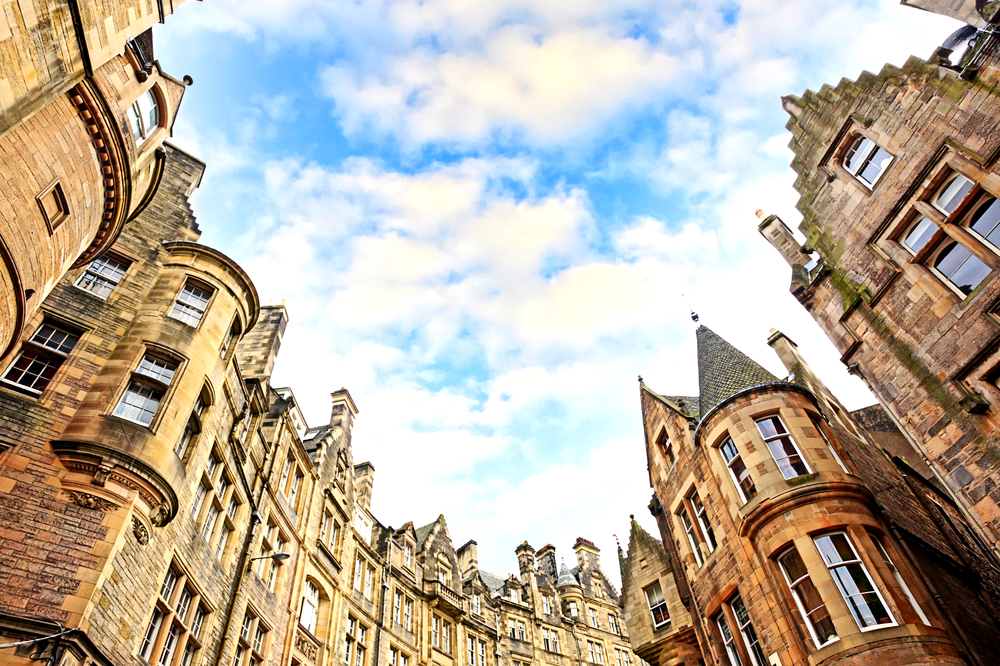 There’s so much to explore even if you only have 48 hours in Edinburgh. The suggestions above are a great way to immerse yourself in some of the city’s rich culture and history, especially if you’re planning on a short stay.