Mexico Travel Etiquette: How to Be a Great Guest in Mexico 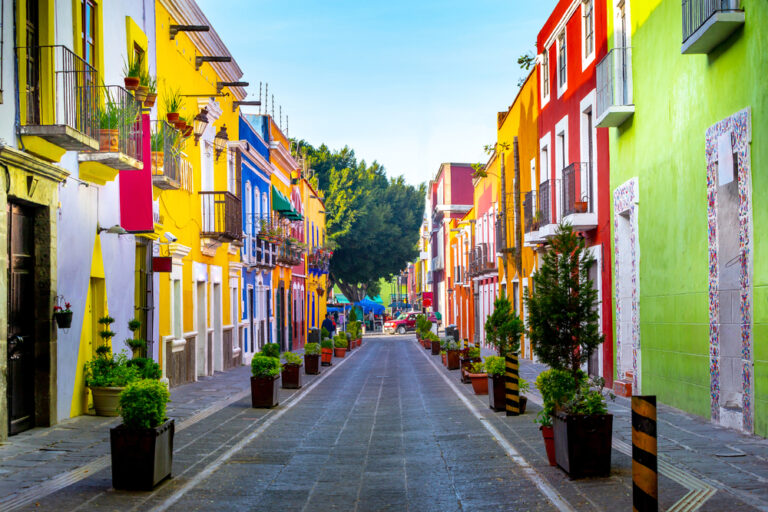 Mexico is the kind of country that can take a lifetime to explore. On a trip to Mexico, you’ll enjoy the Yucatan Peninsula, beach resorts on its crystal blue Caribbean coastline, lush jungles, ancient Mayan ruins, and the Pacific Ocean coast along Baja California. The center of Oaxaca and Monte Albán are UNESCO World Heritage sites rich in regional history. In addition, the modern, bustling, and culturally rich Mexico City is only an hour’s drive from the Pyramid of the Sun and Pyramid of the Moon of Teotihuacán. Visit every one of these Mexican treasures, and you’ll still only be scratching the surface of all the country has to offer.

There’s so much to do, see, learn, and eat in Mexico — each of the country’s nine regions boasts a uniquely delicious cuisine — that it’s hard to take it all in, even if you’re fortunate to make your way there on several occasions. So instead, the best way to take advantage of what Mexico offers is to immerse yourself in Mexican culture and get to know its people. 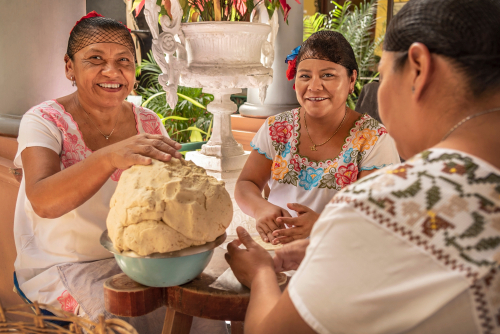 Understanding Mexico and its travel etiquette will enhance your experience as you travel and can make you a great ambassador of your home country.

The Importance of Etiquette in Mexico

Mexicans have a well-earned reputation for being welcoming hosts to tourists and business visitors from around the world. A North-America-meets-Latin-American-country, as Mexico borders the United States to its north and Guatemala and Belize to its south, Mexicans are decidedly modern people who hold onto old-fashioned notions of manners that encompass values and respect.

If you’re planning a trip to Mexico and want to put your best foot forward, this article explains what you need to know about proper etiquette in Mexico.

With some big city exceptions — such as the booming metropolises of Mexico City and Monterrey — Mexicans move at a gentler pace than most Americans, Canadians, and Europeans are used to experiencing. If you can accept this fact from the get-go, your time in the country will be much more “tranquilo” — or Spanish for “calm.”

You may hear references to “Mexican time,” which has nothing to do with clocks or time zones. Instead, Mexican time is a tongue-in-cheek way of explaining that precise punctuality is of little importance.

Showing up at a host’s home on time is the height of rudeness. Plan to be at least 30 minutes — or even up to a couple of hours — late. Rather than getting frustrated, embrace this altered-time universe as a guest in the country. If the waiter takes their sweet time bringing you the check, take a deep breath, relax, and take a few more sips of your margarita. Except for medical appointments and some business meetings, everything in Mexico will move slower than your normal pace. 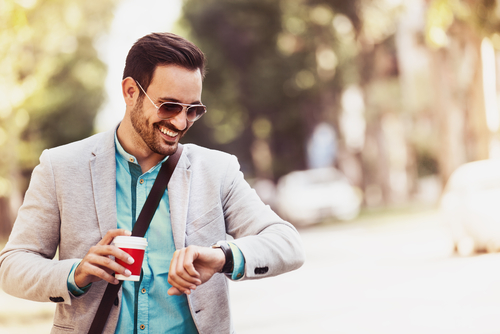 When and How to Tip in Mexico

Tips — usually referred to as “propinas” in Spanish — are common in Mexico. While tipping will depend on the type of service provided and the situation, how much to tip will depend on where you are. If you’re in an area teeming with American tourists, the expectation is to provide a 15% to 20% tip. If you’re in an area that caters more to the locals, a tip of 10% to 15% is the norm. Sometimes, restaurant owners work the gratuity into the bill’s total, so you won’t be expected to add a tip at all.

If you’re staying at an all-inclusive Mexican resort with a no-tipping policy, you can still slip some extra Mexican pesos to anyone who provides you with exceptional service. It’s a good idea to keep extra pesos on you at all times for tips. If you plan to tip using U.S. dollars, only use bills, as your recipients won’t be able to exchange U.S. denomination coins for pesos.

Generally speaking, taxi drivers don’t expect a tip. However, many people will tack on a small tip of 10 pesos or so  — equivalent to $0.50 USD — if the cab driver assists them with luggage. The same goes for airport shuttle services. Again, a tip isn’t required, but offering 10 Mexican pesos per bag is always appreciated.

For drivers who act as tour guides, tack on a 10% to 20% tip to the agreed-to fee. This rule applies to all tour guides, whether providing a private service or leading a group excursion. 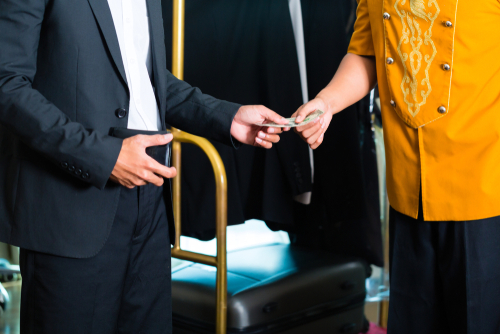 If possible, leave a tip each day rather than at the end of your stay, as the same staff may not attend the same rooms every day.  If you use the services of a hotel concierge — perhaps you received assistance with restaurant reservations, arranging for excursions, or airport transportation — an apt tip ranges from 50 to 100 pesos (approximately $2.50 to $5.00 USD).

If you’re driving a car around Mexico, you’ll need to know the tipping protocols at gas stations.

A thing of the past in most of America — with New Jersey and Oregon being notable exceptions — many gas stations in Mexico provide full service, which means that attendants will pump your gas and wash your windows. It’s typical to pay cash for gas and tip the attendant. You can either round up the purchase amount in “keep the change” (or “quédese con el cambio” in Spanish) fashion or add 10 pesos or so to the total amount.

Some of the restrooms in higher-end restaurants, clubs, and hotels in Mexico will have attendants. Their job is to keep the restrooms clean and provide you with towels, soaps, deodorants, hair care products, or anything else you might need to freshen up.

There will be a tip jar next to the attendant station where you can leave a gratuity. While not required, it is always nice to leave 10 or 20 pesos. Note that if you use an attended restroom facility more than once while at an establishment, it’s unnecessary to tip each time.

Tipping for Salon and Spa Services

It’s customary to tip 15% to 20% for hairstyling and spa services, such as massages, facials, and other beauty treatments. Sometimes — especially at resorts — the gratuity is already included. If that’s the case, no additional tip is necessary, although adding 10% or more for great service is always appreciated.

Music is a huge part of Mexican culture, and many restaurants provide music as part of the dining experience. So it’s not uncommon for a mariachi band to walk up to your table, invited or not. 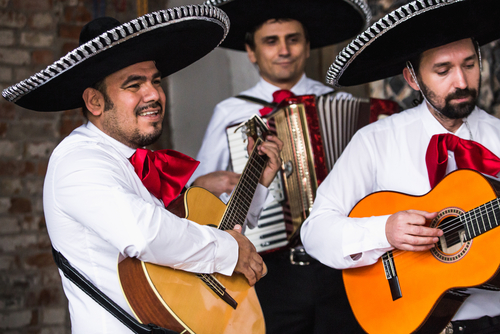 Of course, you’re always welcome to send them away with a polite “no, gracias,” but if they play a song or two at your table, they will expect a tip. Twenty pesos will suffice but think about upping that to 50 if you can. Most musicians survive on tips alone, and this is one of the more unique and festive aspects of dining out in Mexico.

Tipping in restaurants in Mexico follows the same basic rules as most countries. If a bill arrives with a 10% or 15% tip included, think about tacking on a bit extra for exceptional service. If the bill arrives without a gratuity attached, 15% or 20% is the norm, and 10% of the total bill should be the absolute minimum.

Tipping for food service only applies to sit-down restaurants. You don’t need to tip when purchasing tacos and tortillas or other street food from open-air vendors.

The same general rules that apply to food servers also apply to bartenders. However, if you’re hanging around for a while, and the service and drinks are particularly good, you might want to tip on the higher end.

Dining in restaurants in Mexico is one of the best ways to experience the regions of the country. No matter where in Mexico you are dining, the same rules of etiquette will apply. Especially in situations when a Mexican local invites you to dine at a restaurant.

Getting around Mexico in public transportation is a great way to get away from tourist areas and connect with the Mexican people. However, whether you travel on city mini buses — called colectivos or peseros — in the country’s tiered bus system or by subway or rail, there are some etiquette rules you should follow if you want to avoid offending your fellow passengers.

How to Dress for Different Occasions in Mexico

There are only a few hard-and-fast rules you should be aware of when it comes to dressing appropriately in Mexico. 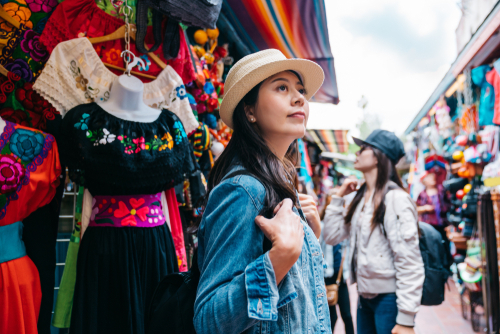 How Mexicans behave in certain social and business situations may differ from what you are used to in your home country. A few matters to keep in mind are:

In Mexico, manners are important. People raised well are considered cultured or well educated (bien educado), and rude people are considered poorly raised or poorly educated (mal educado). As a rule, Mexican people are very welcoming of foreigners and, as long as you present yourself as bien educado, you’ll be accepted and embraced.

Some ways that tourists can be perceived as poorly raised are:

If you’re ready to immerse yourself in the immense beauty and culture of Mexico, VacationRenter can help you find the ideal vacation rental to bring your plans to life. We bring together all the best Mexican rental options from the major travel sites, so you can find the vacation rental of your dreams without spending hours searching and scrolling.