Places to Stay For Your Next Marathon

You’ve trained for it, dreamed about it, worked for it, most likely bled for it, and now it’s time: you are about to run in a big-city marathon. Wherever you are headed for your 26.2 mile long adventure, there are plenty of factors to consider if you don’t live within proximity to the event. Each city has its famous landmarks and notable venues, so staying near them might feel like the right move. However, factors like traffic, proximity, time of the race start, and even weather could derail your venture from Point A to Point B to get on your mark. Here are a few well-known marathon cities that provide runners with things to do (and eat) right near the starting line.

If you can make it here, you can make it anywhere, and if you can run a marathon here, you will enjoy views of all five boroughs in the process. This race takes place in November and starts in Staten Island, taking runners through Brooklyn, the Bronx, Queens and to the finish line in historic Central Park. Nobody can deny that a view of Central Park (or even Times Square) is a must see, but the race starts at 8:30 AM and you can’t exactly hop a cab to the starting line in Fort Wadsworth, Staten Island. If you decide to stay local, you can expect to enjoy breathtaking views of the historic Verrazano Narrows Bridge as well as Gateway National Recreation, a parks system that includes beaches and campgrounds and even extends to New Jersey.  The neighborhood is also home to historic Fort Wadsworth, an abandoned military fort, and ArtSpace@ Staten Island Arts.

Ready to “start spreading the news?” Look no further for your affordable rental.

Although this mid-January event starts and finishes within stone’s throwing distance from each other, it still takes runners on a tour of the town as runners start at Congress Avenue at Jacinto to and finish at Lamar and Crawford. Although participants are encouraged to report for their start by 6:30 AM, there is plenty of sightseeing and adventure to be had in the area both before and after the race. For starters, there is the Aquarium, which offers marine and aquatic adventures, live music, dining, and exhibits. There is also the Hobby Center for Performing Arts, where theater enthusiasts have enjoyed concerts, performances and Broadway shows, such as Cats, Fiddler on the Roof, and Hamilton.

Headed for Houston? Affordable vacation rentals are no problem.

Sin City takes it easy on its runners since its marathon starts at 4:30 PM, but it’s still every bit a marathon as runners head from the starting line at Harmon & Park Avenue to the finish line on Las Vegas Boulevard at the Mirage. There is plenty to enjoy along the route, which nicknames itself the “Rock N’ Roll Marathon,” including a barrage of lights and high rolling. Closer to the start of the route, however, you will find a few attractions to tide yourself over while you wait for the race to begin. There is the Downtown Container Park , where you’ll find eating and drinking venues, shopping, and events–all in a series of shipping containers. There is also the Fremont Street Experience to take in free concerts and for the more daring set, there is the Slotzilla Zipline, where you can zoom from seven stories above the city.

It would be a sin to visit Sin City and not book an affordable room. Check it out.

Early spring in Massachusetts heralds the Boston Marathon, which takes runners from Hopkington, a town just outside the city, to the finish line at Boylston Street, in between Brookline and downtown Boston. The race starts at 9:30 AM and while Boston itself presents plenty of attractions, including some old school Americana, Hopkington has it going on in its own way. There are marathon start lines, and then there is Hopkington, which makes it a point to celebrate its role in this event in style with a decked out attraction affectionately known as the “Starting Line.” In addition, there is Hopkington State Park, which boasts plenty of nature, water, and trails. If you’re not feeling the nature, there is also Start Line Brewing, a brew pub and eatery where you can get your drink (and eats) on.

Check out these affordable vacation rentals in Boston.

The glitz, glamour and California soul takes place in March and it takes runners from Dodger Stadium to Santa Monica. Staying near the beach is certainly compelling, but with Dodger Stadium being located waaaay across town and traffic jams that make headlines, you might find the 9:30 AM start time easier to digest if you stay closer by. Luckily, in addition to Dodgers Stadium, the neighborhood is home to plenty of attractions. Two to get you started are the nearby Echo Park neighborhood, which is rife with “hidden gems,” including sets of stairs if you’d like to practice a little, and the Lady of the Lake at Echo Park Lake. Another must is Chinatown Central Plaza, which is steeped in rich Chinese culture and history. Runners looking for even more culture can check out the Walt Disney Concert Hall, where the LA Philharmonic plays. 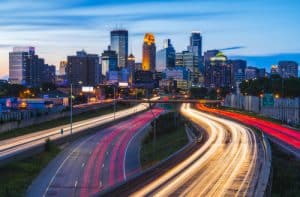 Last but never least, these cities affectionately known as the “Twin Cities” invite runners to partake of their local culture during their fall marathon.  Runners in this event starts in Minneapolis, and they end in Saint Paul, with plenty of each locale in between. With a solid art community and infamous foods like Booya (a stew that is known for being both an event and a meal), there is plenty to explore and indulge here. However, this particular marathon has a start time of 8 AM, which means staying near the starting line could save you time and energy. Located near the US Bank Stadium, which plays host to the Vikings football team and concerts, this neighborhood is no slouch in the entertainment department. For starters, there is the Mill City Museum, built in the remains of an old flour mill on the Mississippi River. One hidden gem for art lovers is Museum Louvre It or Leave It where the emphasis is on a variety of eccentric artwork. There is also The Commons, a greenspace that hosts culture and arts events, gatherings and a food market, just to name a few.

Look no further to find your affordable rental in the Twin Cities.