The Best Lakes in Virginia 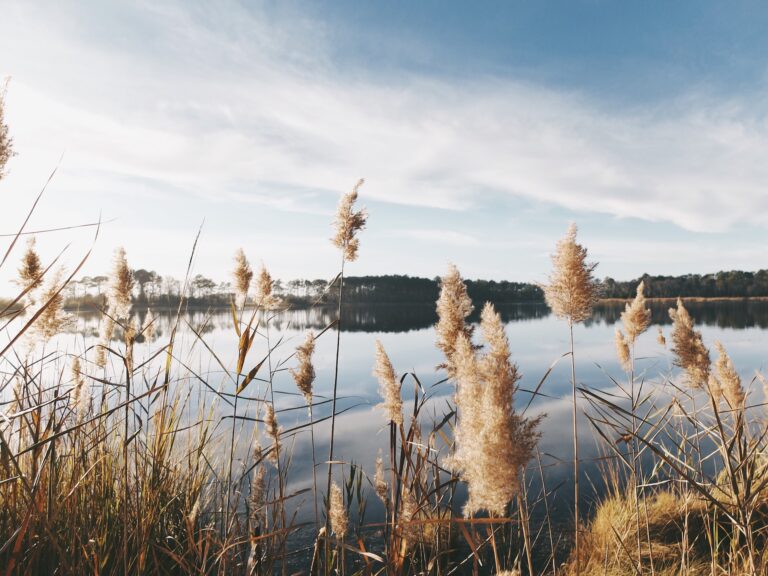 The Virginia landscape has played witness to some pretty wild scenes. The state has lived through turbulent historical events such as the Civil War in the 1860s, and then the Civil Rights Movement a century later. Yet through all of the unrest and upheaval, Virginia’s vistas draw all kinds of people to kick back and relax while taking in the natural splendor. Today, the state’s beauty, particularly amidst its lake towns, is as serene as ever.

Here are our picks for the state’s top three lake town destinations — all of which have no problem keeping their cool, even on the most scorching of summer days.

If you’re looking for the gold standard of summer getaways, Lake Anna will assuredly be at the top of the list. In fact, this lake town was built on the Goodman gold mine site when gold reserves were discovered in the state two centuries ago. Resting along the southern part of Washington D.C., the lake decadently stretches 72 miles and is spread out between the towns of Louisa, Spotsylvania, and Orange County. 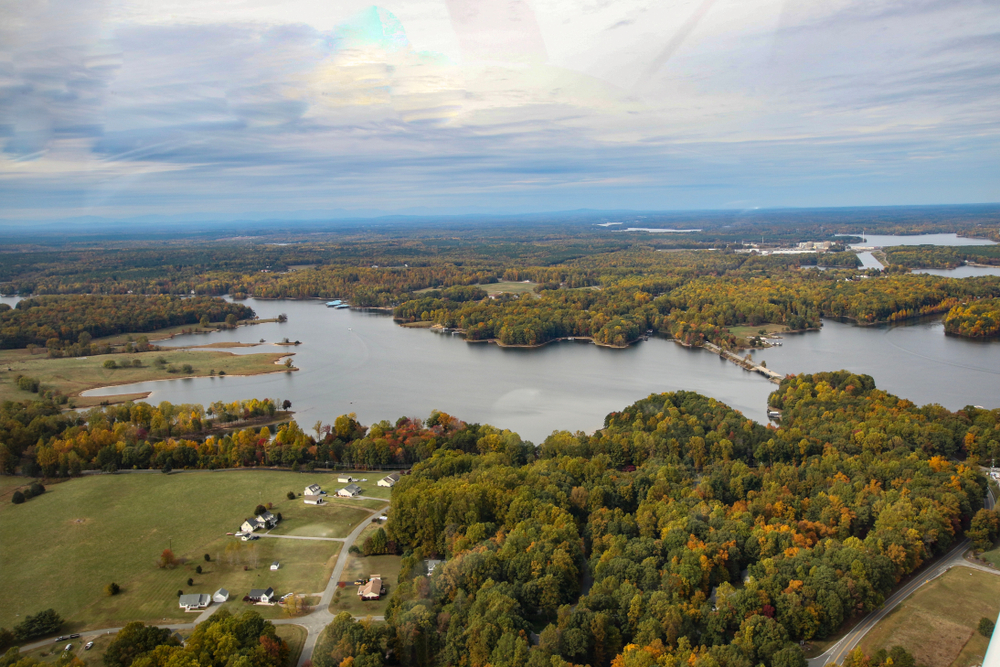 You can get to this nugget from Washington D.C. in just over two hours by car — or even less by train if you’re in a real rush to unwind. Lake Anna Airport also has flights that come in from Charlottesville Airport.

Things to Do at Lake Anna

Feasting like a king (or queen) on the local delicacies and wine is practically a royal decree in the town, so there’s no need to feel shy. Thanks to an abundance of fresh daily catches, there are eateries galore. One mouth-watering example is Tim’s Crabhouse, where you can dine by the water and indulge in fresh crab, shrimp, and pulled pork sandwiches. The 20-year-old Farmer’s Market in Spotsylvania is also a treasure chest of local produce.

Every royal has their treasured goblet of wine, and you can have yours in one of Lake Anna’s many boutique wineries. Cooper Vineyards, Lake Anna Winery, 1781 Brewing Company, and Mattaponi Winery are high on the wine list.

As you go about your tour of the town, the Spotsylvania County Museum in nearby Fredericksburg will be one cultural stop you’ll gladly check off your itinerary. Here you can get insight into the area’s history, beginning with early Native Americans and continuing on through the Civil War.

Even royals need their downtime, and Lake Anna State Park is filled with exciting excursions. Boating, fishing, and hiking are always in demand.

Claytor Lake has been lighting up the lives of residents and visitors since 1939. The Claytor Project was created to provide electricity to the region, and the lake was named after the man who supervised the project: Graham Claytor. Since then, the lake has illuminated the town as a popular weekend getaway and is highly sought-after as a fishing and boating destination. 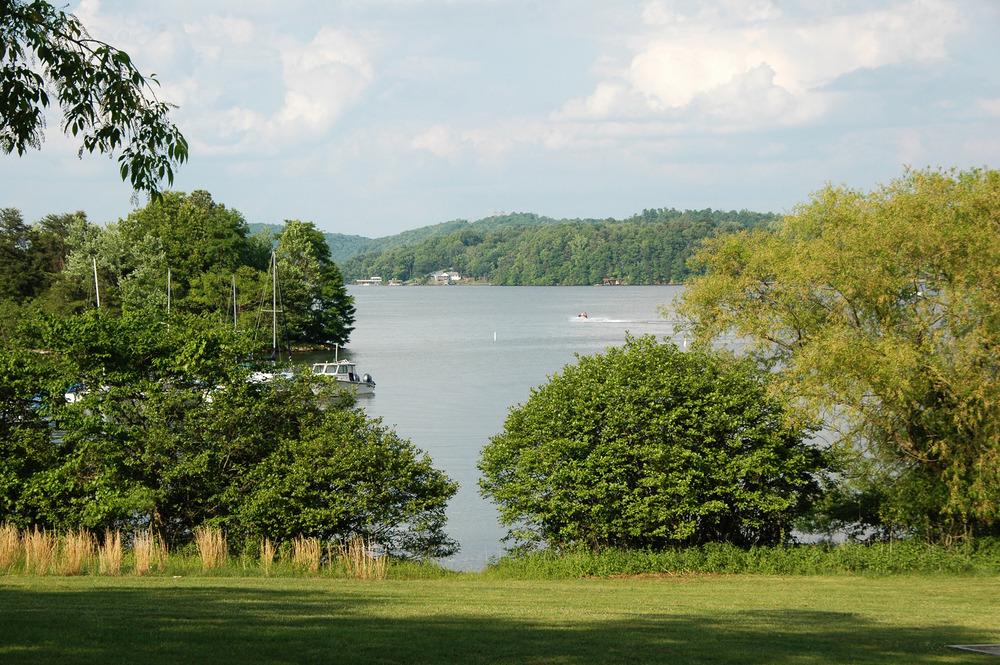 Situated on the outskirts of Roanoke, Claytor Lake is surrounded by the small towns of Belspring, Draper, Dublin, and Radford. The lake is a two-hour drive from Washington D.C., but a train or bus ride can make for a scenic trip. Roanoke Airport is only a 26-mile ride from the lake town.

Things to Do at Claytor Lake

The town has a plethora of parks and plentiful opportunities for fishing. If you’re a hiker at heart, take to the alpine trails of Wildwood, Bisset, and Claytor State Park. If you’re still feeling restless, you can also mountain bike your way across the adventurous terrain. But don’t be surprised if the sight and sounds of birds make you come to an abrupt standstill: it’s easy to get lost in an afternoon of birdwatching.

Claytor has much to offer in the way of food, drink, and live music. Mountain 2 Island at the Rockhouse Marina is a one-stop-shop for all three and then some; they also provide boat rentals, water sport activities, and exceptional marine service. Food specialties include Island Salad with Coconut Shrimp as well as their Cauliflower Crust Gourmet Pizza. If you can feel your taste buds coming alive, let your palette light the way to Chattooga Belle Farm Distillery, where you can indulge in a little light whiskey and brandy tasting, only a 30-minute drive from the lake.

It’s no wonder that Smith Mountain Lake is known as the “Jewel of the Blue Ridge Mountains.” The crystal-clear waters materialized after the Blackwater and Roanoke rivers flooded the valley, and the lake covers a whopping 20,000 acres with 500 miles of shoreline. The Blue Ridge Mountains also make for an enchanting setting; this gem of a lake is set between Roanoke and Lynchburg, and is less than a five-hour drive from Washington, D.C. You can fly into Roanoke Airport or take the scenic route via train or bus from Lynchburg. 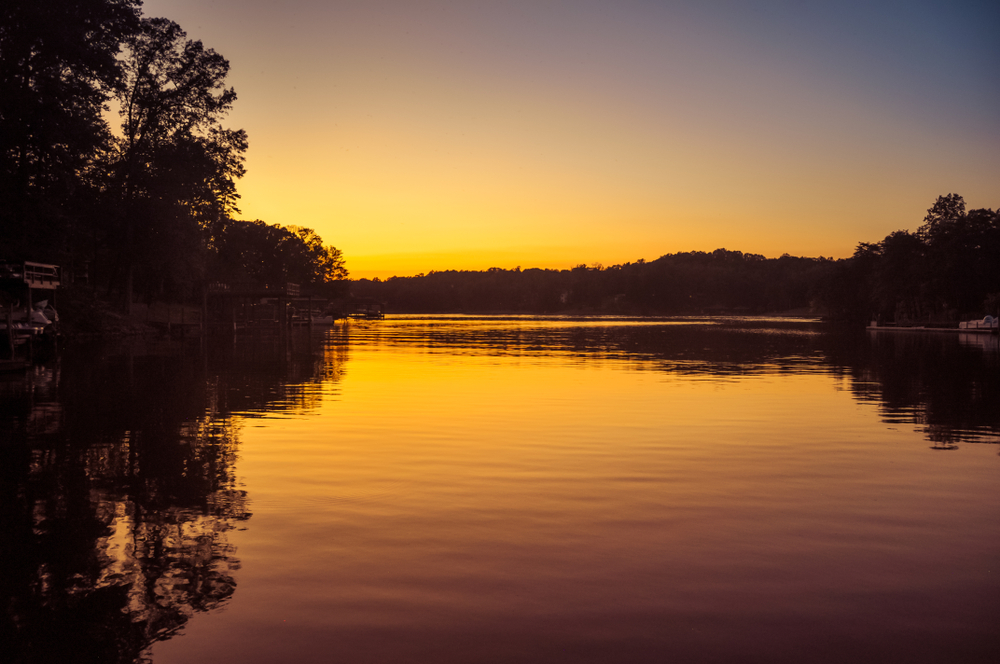 Things to Do at Smith Mountain Lake

The lake is a wonderful opportunity to shine at watersports, where there is no shortage of swimming, power boating, canoeing, sailing, parasailing, waterskiing, wakeboarding, and jet skiing. If you’ve had your fill of showing off, there’s also good old-fashioned fishing to keep that ego at bay. You can also take to the land where there are five major golf courses and a host of hiking trails. Smith Mountain Lake Caving and Climbing is also a hands-on approach to connecting with more of the region’s natural wonders.

The delicacies at The Landing Restaurant — a waterfront, resort-based eatery with a Latin vibe — are a cut above. Starters include Grilled Peaches & Burrata Smores and Beef Marmalade Toast; a signature entree is the delectable Chilean Sea Bass. Locals love the Portside Bar and Grill, a.k.a the town’s very own tiki bar, for its signature “Wings of Paradise” that comes with a special “No Name Hot Sauce.” There’s also Carl’s Place, which has been serving up quite the home-style scene since 1947.

Smith Mountain Lake also has no problem stealing the show on the film front: you can check out the filming locations of What About Bob and Lake Effects as your trip’s bonus material.