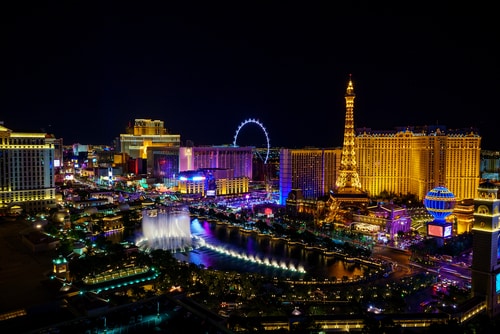 Staying at a vacation rental property near an airport isn’t everyone’s idea of luxury. But in Las Vegas, it’s different. As soon as you step off the plane, you feel like you’re already on vacation thanks to the rows of slot machines inside and palm trees outside. The McCarran International Airport is almost like a busy casino that just happens to be an airport. Nearby rentals are convenient, and many are as opulent as what you’d find on the Strip, making this area ideal to stay in during vacation or if you’re there for a convention.

The McCarran International Airport is technically located just outside of the City of Las Vegas in an adjacent town called Paradise, which is also conveniently located near the famed Strip. Staying near the airport means you’ll be close to the action, anyhow. It helps to know your options if you’re planning on staying as close to the airport as possible.

Staying at the McCarran Airport

There are no hotels within the actual airport. The streets about a mile away from the airport, as you’d expect, are filled with hotels, many of them moderately priced. There are a few glitzy five-star luxury resort properties with thousands of rooms under one roof, just like you’d find a mile away on the Strip. Staying around the airport is considered an ideal location for those hitting the Strip, attending conferences at the Las Vegas Convention Center or shopping at area malls such as the Fashion Show Mall.

Many hotels on the Strip are considered “airport hotels,” but they may be five minutes away from McCarran and closer to the entertainment areas. Look for the larger hotels that include the word “airport” in their names, and you’ll know you’re about a mile or a little bit more than a mile away from take off and farther away from the Strip. The airport is located on Wayne Newton Boulevard, two miles from the Strip and 15 minutes from Downtown Vegas, so seek out nearby streets with hotels if you choose to stay close to McCarran, such as South Las Vegas Boulevard, East Tropicana or Paradise Road, for example.

Staying in Paradise (a.k.a. on the strip)

Most of the casinos located on the Strip are also technically located in the town of Paradise, also known as Paradise Township. Both Paradise and the City of Las Vegas are governed by Clark County. The old Downtown Las Vegas is located within the City of Las Vegas. All that’s important for you to know is that there are plenty of vacation rentals in Paradise. It’s more likely you’ll find private condos or rooms in luxury hotels than entire single-family homes, but all are convenient to both the airport and the Strip.

Staying off the Vegas Strip in Spring Valley

Two miles away from the Las Vegas Strip is a relatively new town formed in 1981 called Spring Valley, but locals consider it more of a neighborhood than a stand-alone city. Whether it’s a city or a neighborhood, it’s still close to all the airport and casino action; however, it’s on the quiet side. Here you’ll find more private room rentals in single-family homes rather than luxury hotel rooms. There are also apartment or condo complexes in the area, many with common resort-style pools for guest use and many of which are available for vacation rentals.

Staying in the Vegas Suburbs of Henderson

Henderson, a town near the City of Las Vegas, is considered a suburb and part of what’s called Las Vegas Valley. The town is located about 10 to 20 minutes away from the city, and it’s popular among vacationers who prefer to stay away from the flamboyance and traffic of the Strip and downtown. There’s a convention center in town thanks to its proximity to McCarran International Airport. Though it’s mostly residential, there’s a mix of luxury hotels and resorts, also with condos to rent. If you prefer to stay at a more personalized bed and breakfast or rent an entire single-family house with a private backyard, they’re all available in Henderson, as well.

Staying Outside of Town in North Las Vegas

About 11 miles away from McCarran Airport you’ll find a quiet city called North Las Vegas. But it also has another little secret called the North Las Vegas Airport. This airport, an alternative to McCarran, provides services to small aircraft and business jets and is about three miles from Downtown Las Vegas.

North Las Vegas has a smattering of luxury hotel casinos, but it’s more of an area in which you’ll find moderate priced hotels. If you’re seeking spacious, quiet vacation accommodations and want to stay in a more residential neighborhood like North Las Vegas that’s close to the airports and the action, your best bet would be to look to the area’s large quantity of rental condos, villas, lofts or single-family homes with private pools. Many vacation rentals in town are located behind gated subdivisions and in planned communities.