Study: Alcohol Prices Around the World 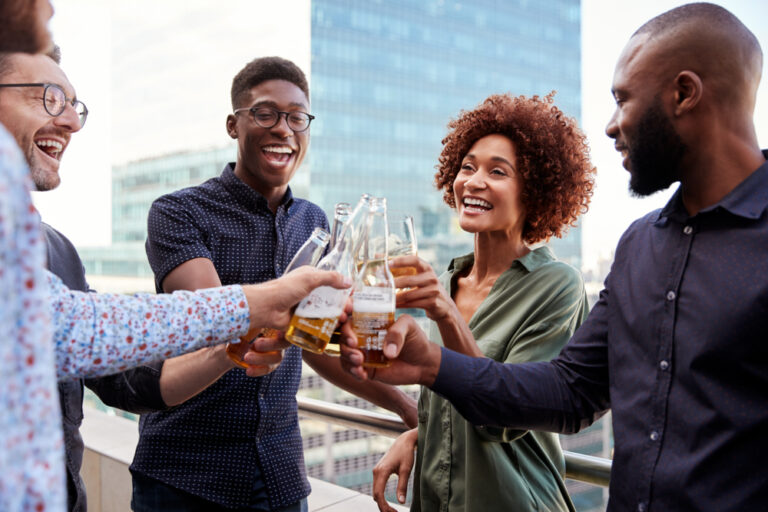 Traveling costs can add up, but alcohol doesn’t need to be a focal point of your trip’s bill. So, what could be better than knowing where to find the most affordable drinks for a good time? Beer and wine prices fluctuate globally, so we investigated where you can save the most money on booze and where you’ll find great drinks at unbeatable prices.

Where to Find the Cheapest Beer and Wine Around the World

We’ve highlighted the countries where alcohol is the priciest. That’s not to say you should avoid traveling to these places; it’s just a clue about how much you might need to include in your travel budget.

To gather all the necessary data, we referenced local stores from multiple countries to estimate the average price of a 12-ounce bottle of beer. We then obtained average wine and water prices from Numbeo and used Yelp to find the best cities worldwide to grab a cheap drink.

Read on to learn more about beer and wine prices for your next vacation.

The Best Countries for Cheap Beer

In some places around the world you’ll see some eyebrow-raising beer prices, while in other destinations, beer prices are a pleasant surprise for budget travelers. Find out where you can drink for next to nothing. 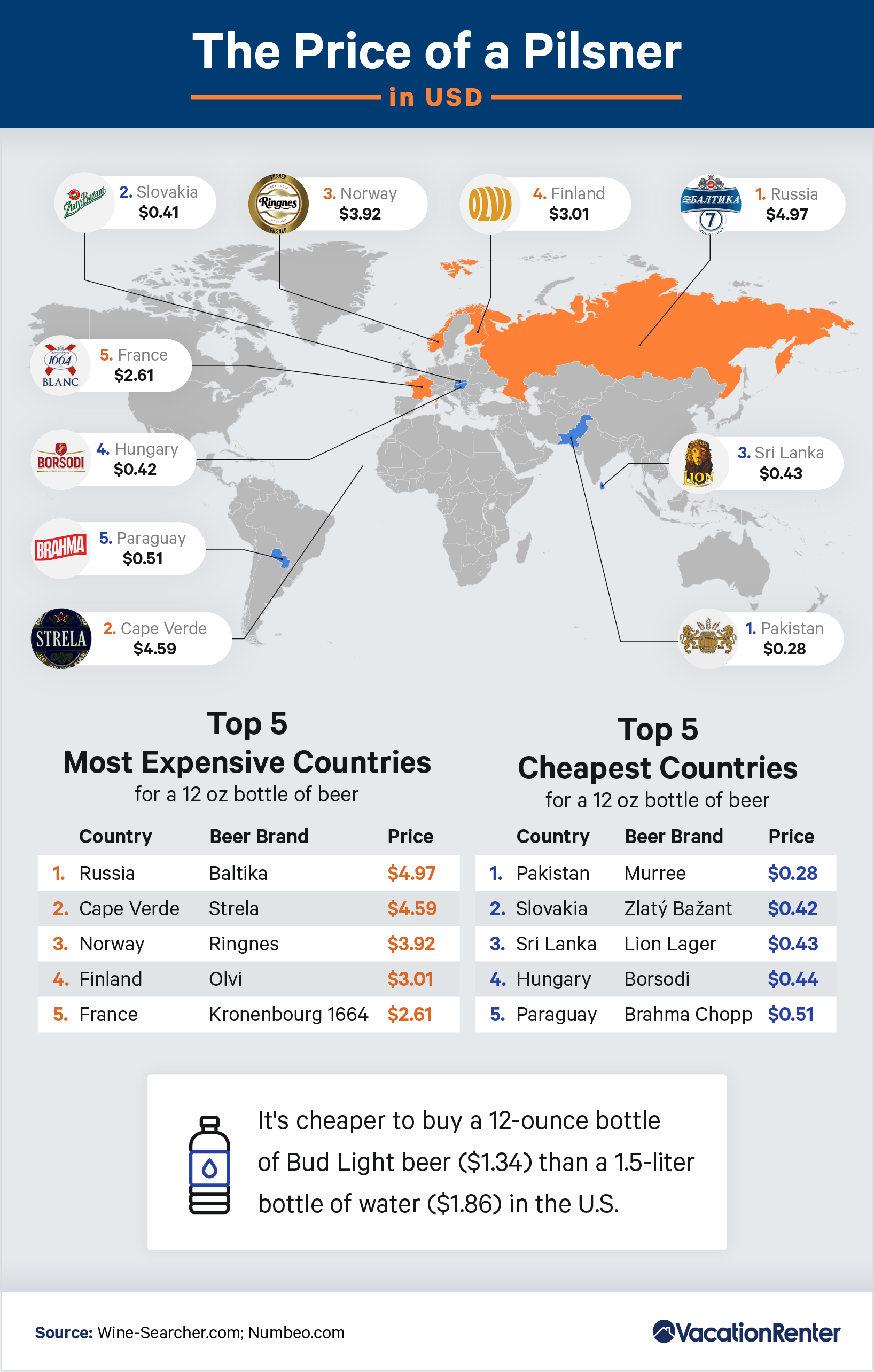 Home to the most expensive 12-ounce bottle of beer in the world, Russia’s Baltika costs $4.97 a pop. Baltika is one of the largest consumer goods companies in Russia and produces a wide assortment of beers, including ales, lagers, fruit beers, and more. In 2008, they became a part of the international Carlsberg Group, who distribute more than 700 different types of beer under their ownership. Top five priciest beers were:

Beer can be pricey in different parts of the world, but for every expensive pint, there’s a cheaper alternative to enjoy. The most wallet-friendly beer you’ll find is a bottle of Murree in Pakistan, where you can buy one for just 28 cents. Murree Brewery produces various beers under their label, similar to Russia’s Baltika, although they are also players in the vodka, gin, whiskey, and rum industry, among other alcohol types. Cheap beer lovers should also take note of these other inexpensive 12-ounce options around the world:

Exclusively available in Hungary, Borsodi has become one of the most popular brands in the country since its creation in 1973. The country not only offers excellent beer, but an even better nightlife, especially in Budapest. Cheap beer lovers and revelers alike won’t want to miss a trip to this amazingly vibrant city.

The U.S. also has favorable beer prices — so much so that buying a 12-ounce Bud Light for $1.34 is cheaper than a 1.5-liter bottle of water for $1.86. This price difference might explain why revenue in the American beer market amounts to $111.50 billion, while the bottled water segment sits at $83.02 billion in revenue this year.

The Best Countries for Cheap Wine

Beer isn’t the only alcoholic beverage with widely varying prices worldwide; some travelers will prefer a nice rosé or a crisp white wine. We’ve discovered where you can find the most affordable wine while traversing the globe. 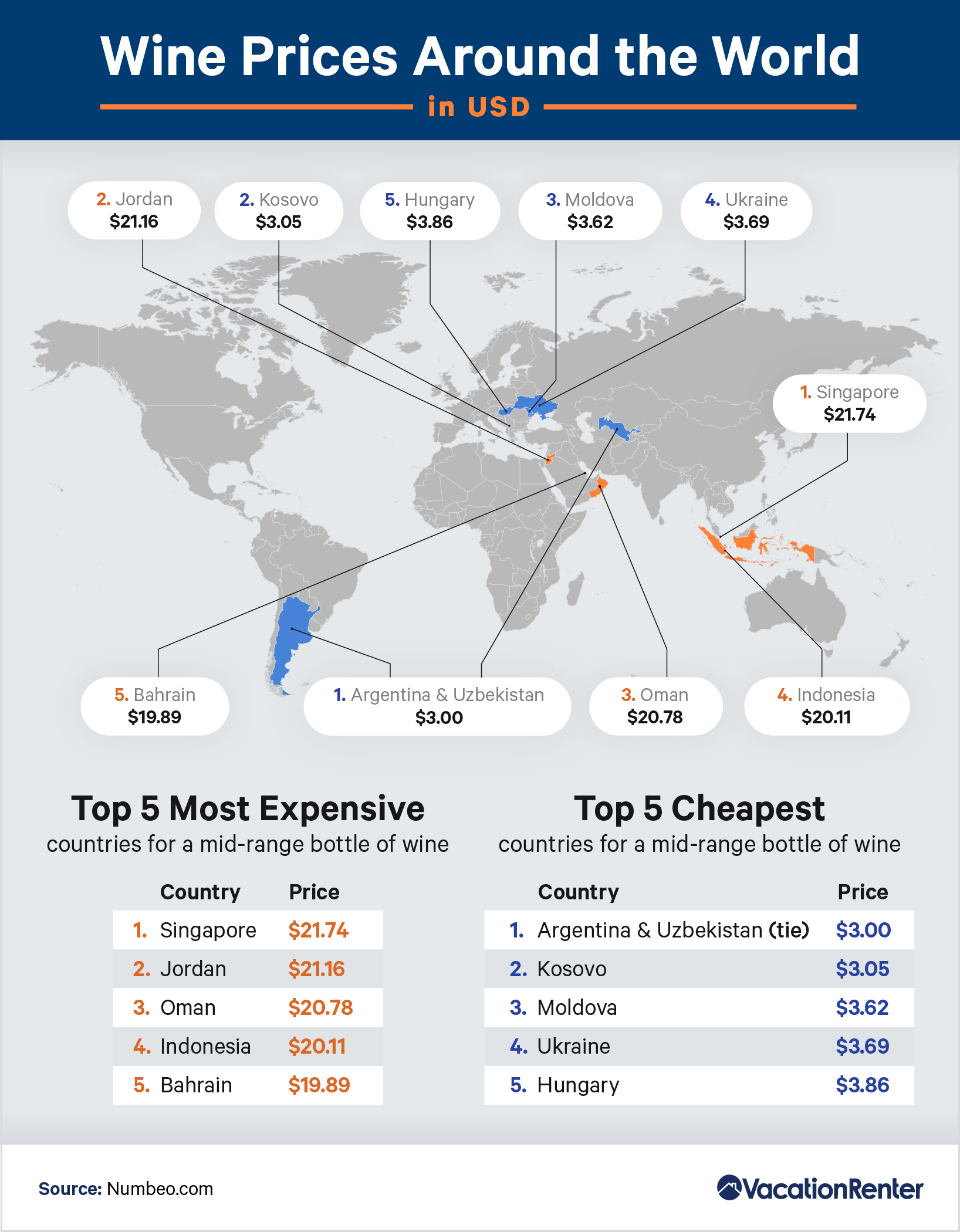 Travelers can find the cheapest reds, whites, and rosés in Argentina and Uzbekistan, where a mid-range bottle costs only $3.00. Argentina is the largest wine producer in South America, and the Mendoza wine region plays a significant role in its production. Reaching as high as 5,000 feet above sea level, its desert landscapes and high altitudes translate to aromatic and intensely flavored reds. The country is known for:

It’s pretty easy to find cheap wine in the eastern regions of Europe — Kosovo, Moldova, Ukraine, and Hungary all sell bottles of wine for under $4.00. Westward European countries also enjoy relatively reasonable wine prices, making wine a popular alcoholic beverage across the continent. The European wine market, as a whole, produced just shy of $153 billion in revenue in 2021 and is projected to hit $218 billion by 2025.

Elsewhere in the world where wine is less prevalent, bottle prices can be less favorable because of the smaller supply. For example, Singapore is home to the most expensive mid-range bottle, with a price tag of $21.74. A few countries in the Middle East — where many don’t imbibe due to religious reasons — also had high wine prices:

Also, while wine production and consumption are relatively minimal in Indonesia, these beautiful islands are still home to a small number of vineyards. The most well-known winery there is Hatten Wines in Bali, owned by a local family. They began producing brem, a fermented beverage made from rice wine, in the 1960s and branched out to grape-based winemaking in the mid-90s. However, the original brem facility next to the winery is still in operation. Travelers to Indonesia will find many reasons to visit the breathtaking province of Bali, and experiencing the Hatten Wine Adventure is undoubtedly one of them.

The Best Bars for Your Budget

We also researched the best establishments worldwide for a cheap drink or two. To find which destinations have the highest percentage of cheap ($) rated bars, we scraped Yelp.com data from cities all over the world. 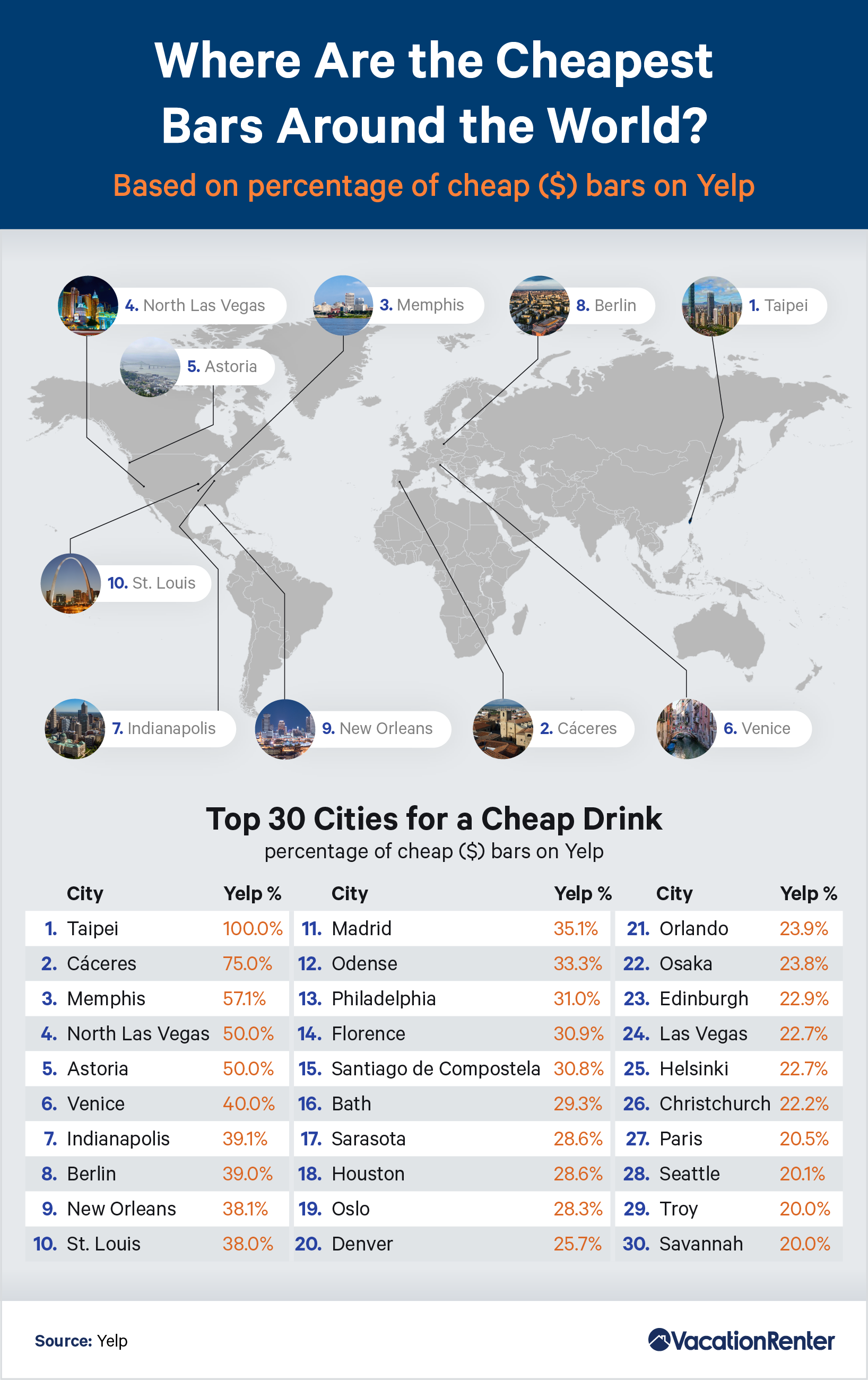 Taipei, the capital of Taiwan, ranked highest among cities with the cheapest bars in the world, with 100% of the city’s bars rated only ($) instead of ($$), ($$$), or ($$$$) on Yelp. Within the city, you’ll find the best nightlife in the commercial district of Anho Rd in East Taipei and Shi Men Ding (or West Side). While some restaurants close by 9:30 pm, many bars are open all night.

We found the most affordable haunts in Cáceres, Spain: a city where three-quarters of the bars were ranked as the least expensive. But it’s not just the cheap bars that make Cáceres worth visiting; its exquisite architecture and many parks, hikes, and delicious eats complement the city’s robust nightlife.

If you want to stay local, the U.S. also has plenty of options for bargain-friendly bars. These American cities made the top 10 for highest percentage of cheap bars on Yelp:

But if you’re scoping out more cheap bars outside the United States, you can try:

You could also consider stepping out of your beer or wine comfort zone by ordering a timeless cocktail like a Negroni, old fashioned, martini, or margarita in any of these cities.

Cheers to a Great Vacation

Congratulations! You’re now an expert in finding cheap drinks around the globe. Beer lovers can get a cold one for just over 20 cents in Namibia or can splurge an extra 20 cents for a bottle in Slovakia or Hungary. While American beer isn’t as cheap as those at these international destinations, a 12-ounce bottle is still more affordable than a large bottle of water.

Meanwhile, wine buffs should book their next ticket to Argentina or Uzbekistan if they’re looking for the cheapest mid-range bottle. Otherwise, you’ll find the next-least expensive wines scattered across Eastern Europe.

Finally, Taipei was the top metropolitan destination for cheap bars, followed by Cáceres in Spain, and Memphis in Tennessee. Beer and wine lovers can now get out there and find the best deals on their preferred booze; cocktail lovers — stay tuned for more findings down the line. Cheers!

Prices of local beer from each country were collected from local stores around the world and averaged together to estimate the price of a 12-ounce bottle of beer. Average wine and water prices were obtained from Numbeo in July 2022. Yelp.com was scraped for cities worldwide to determine which cities had the cheapest bars.

If you know someone who’s trying to booze on a budget, feel free to send this article their way. We just ask that you do so for noncommercial purposes only and provide a link back to this page so the contributors can earn credit for their work.