Cabins and Campgrounds for a Socially Distanced Getaway 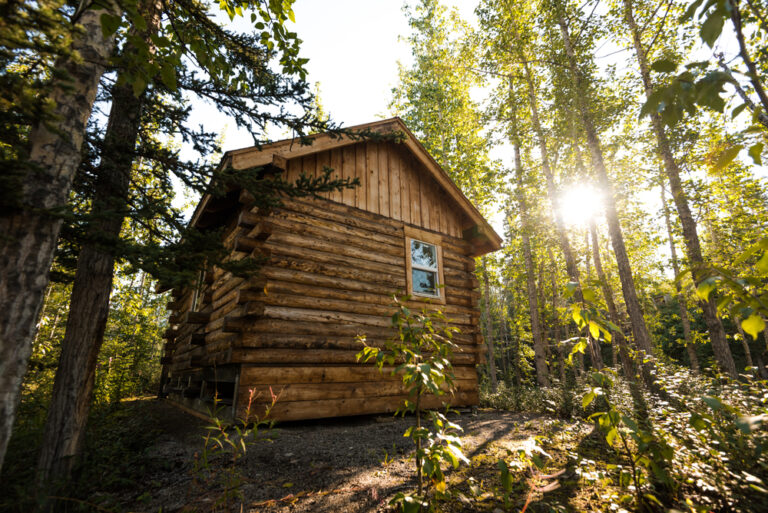 It’s no secret that traveling has changed drastically during the past year. For many, today’s travel interests involve avoiding public transportation – and perhaps the public as a whole, even at the final destination. With a rural cabin or campground retreat, you can check all of the socially distant boxes. For this exact reason, these vacations have become incredibly popular in the past year.

To learn more about travelers personal experiences during this time, we spoke to over 1,000 people across the country – most of whom had already traveled to this type of destination since the pandemic began. Read on to hear what these travelers had to say about their stays, how much they spent, how far they went, and its impact on their health and wellness.

How Far Is “Away” Exactly?

Our study begins with an overall snapshot of remote retreats. Talking only to people who have previously stayed at a cabin or campground, we wanted to know how far they traveled, where they went, and with whom they stayed. We even dug into the average spending on a cabin versus a campground – find their responses below. 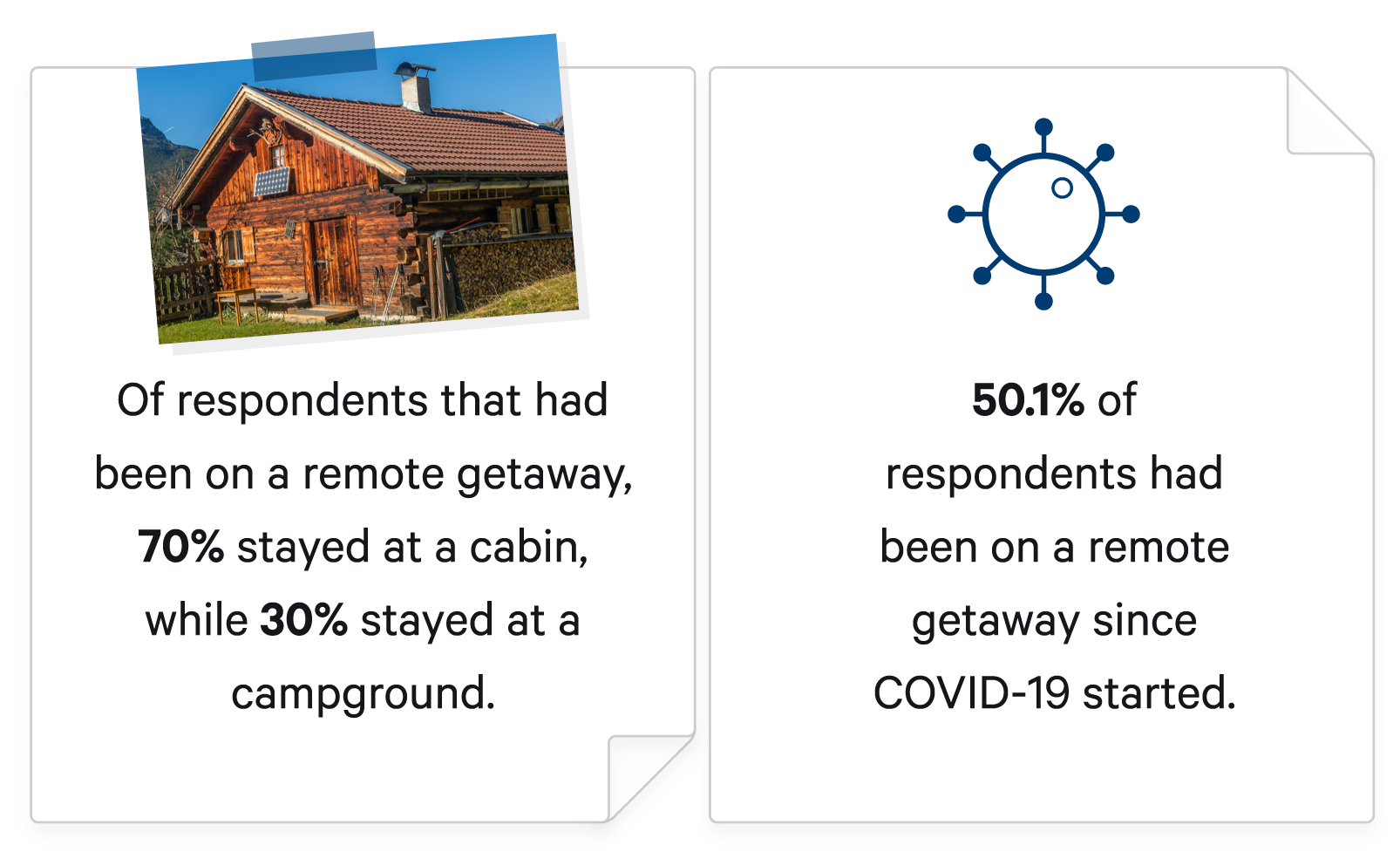 Not everyone wanted to be close to company, with 70% of these travelers opting for a cabin all alone and just 30% choosing a campground with other travelers possibly present. Perhaps even more would have chosen a cabin retreat, were it not for the fact that it typically cost people twice as much as a campground. 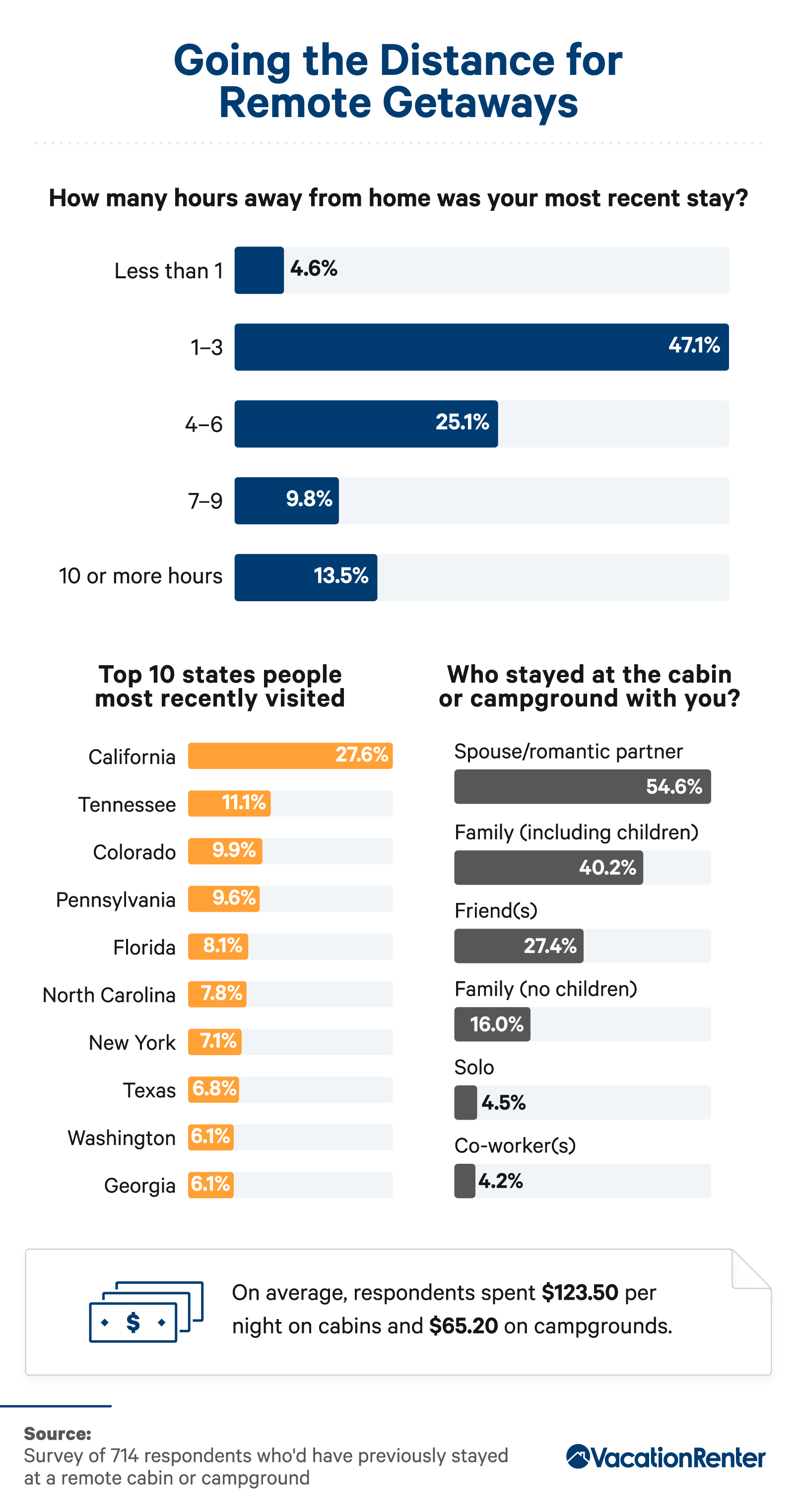 When people planned a cabin or campground getaway, they most often stayed within 1 to 3 hours of their home. However, for some respondents that seemed to be too close to home. 13.5% of them found themselves traveling ten hours or more to get to their remote destinations. They also stayed for a while once they got there, averaging 6.5 nights of vacation in total.  People were also selective about their traveling companions, with fewer than a third going with friends. Instead, people mostly stuck with their spouses (54.6%) and family (40.2%). Which was not surprising as social-distancing guidelines are still in effect across the country.

The internet may have provided us with a way to connect throughout quarantine, but phones may have prevented many respondents from truly going off the grid during their remote vacations. The next piece of our study looks at what respondents prepared for these excursions and the items they decided to go without on their retreat into nature.

Forty-three percent of travelers chose to stay off the grid entirely during their remote travels. This group chose wisely, however, as a whopping 81% of them agreed that they felt noticeably more relaxed after forgoing phone and/or internet service. Travelers staying off the grid didn’t just go without phone or internet service – air conditioning (54.6%), heat (46.4%), and even electricity (40.5%) were common things people gave up while staying off the grid.

Going off the grid completely, however, required some preparation. 71% had to compile all of the food and beverages for their entire trip beforehand, more than half brought a first-aid kit, and 46% percent made sure to share their whereabouts with friends or family before they left. One 33-year-old woman who went off the grid also recommended bringing “a flashlight and a map,” which a phone typically provides under normal circumstances. 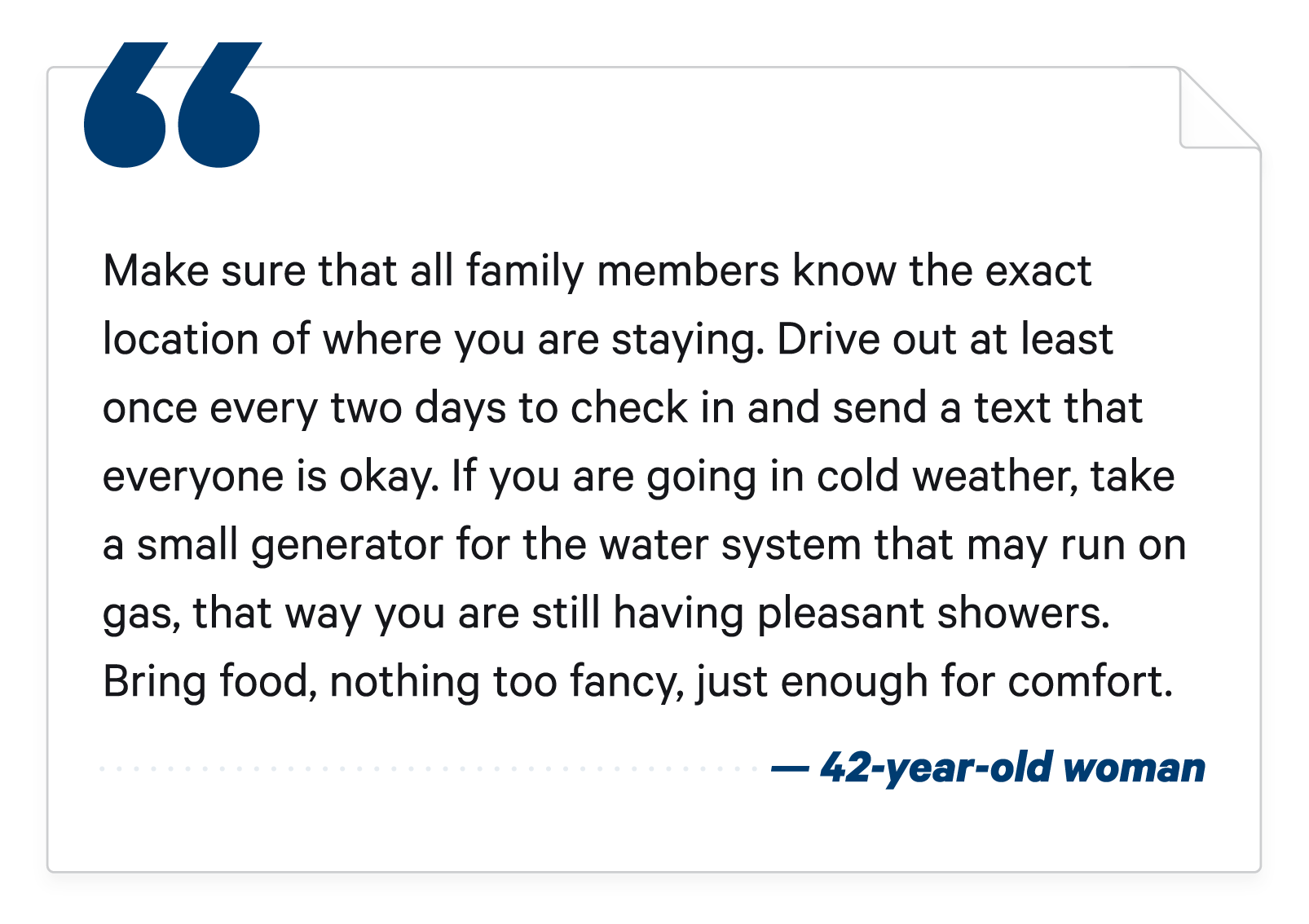 Additionally, periodically driving back toward civilization to let your family know that everyone is okay was a suggestion given by people that have previously stayed off the grid. Furthermore, bringing comfort foods, and preparing for potentially cold showers are also things to consider before staying off the grid.

VacationRenter Pro-Tip: While roughly – or slightly more than – half brought flashlight (62%), first-aid kit (53%), lighter (47%), or a map (45%), we recommend these as hard-requirements when going off-grid. 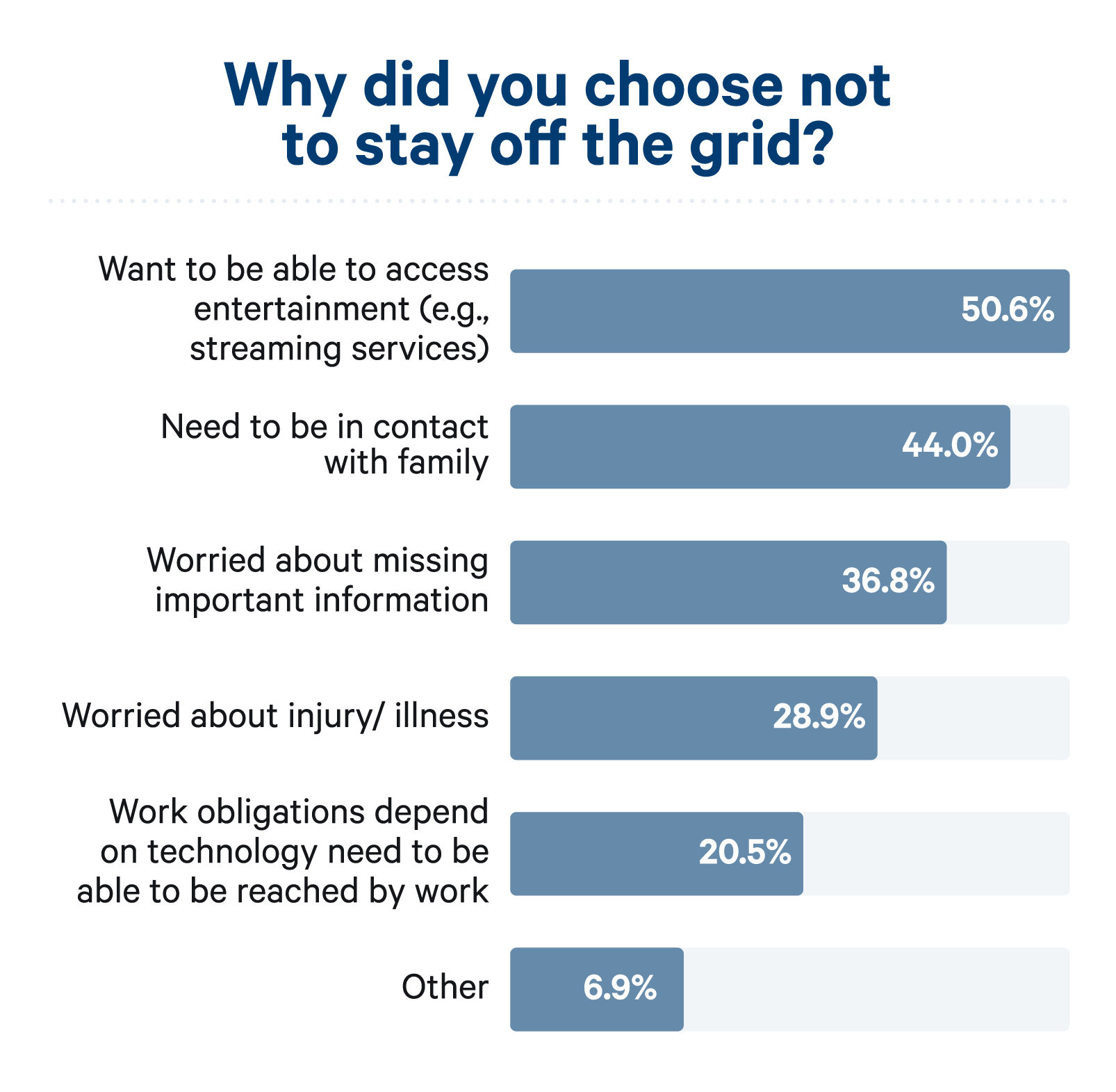 Those who remained on the grid while remote, however, had some interesting reasons. The biggest driver of all – more than friends and family – was not wanting to lose access to entertainment, like TV and streaming services. In our survey, this means that streaming services were a stronger reason to stay online than wanting to stay connected with friends and family, at least for those who did remain online.

Scientific studies have found many benefits to spending time in nature, such as lowering stress levels or increasing happiness, to name just a few. In this study, we put those theories to the test by asking respondents how they felt before and after their trips. We also looked at how difficult it was for each generation to stay away from their phone while enjoying their time in nature. 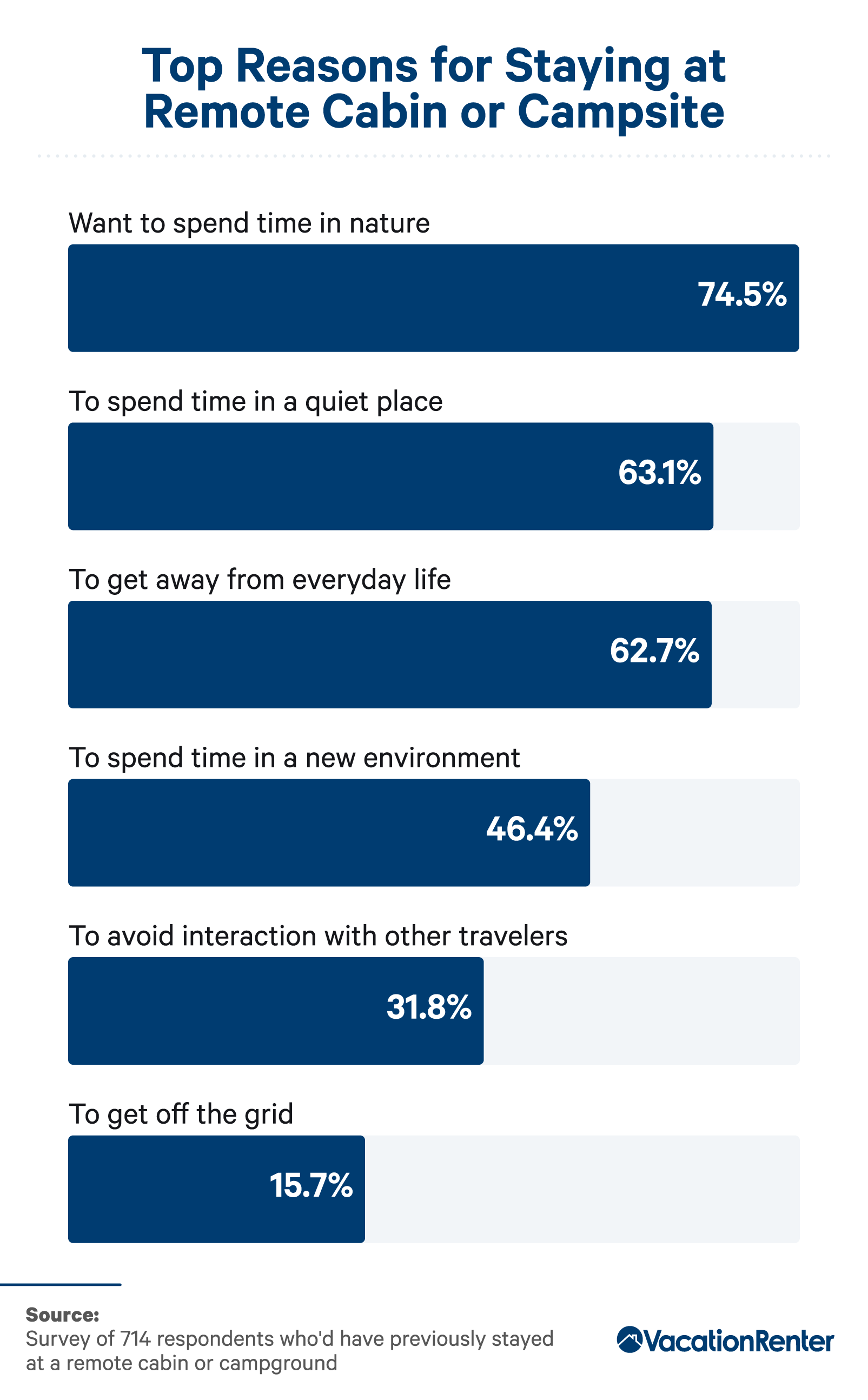 Nature worked its medicinal magic among respondents: 74.5% went away primarily to get time outdoors distant from other travelers, and 84.4% reported feeling happier after their remote getaway. Their activities may have been particularly well-chosen for this pursuit of happiness, as 86.6% said they spent time relaxing and 62.1% engaged in outdoor sports. Physical activities (as well as nature) have been well-documented to boost happiness levels, which was certainly echoed by participants. 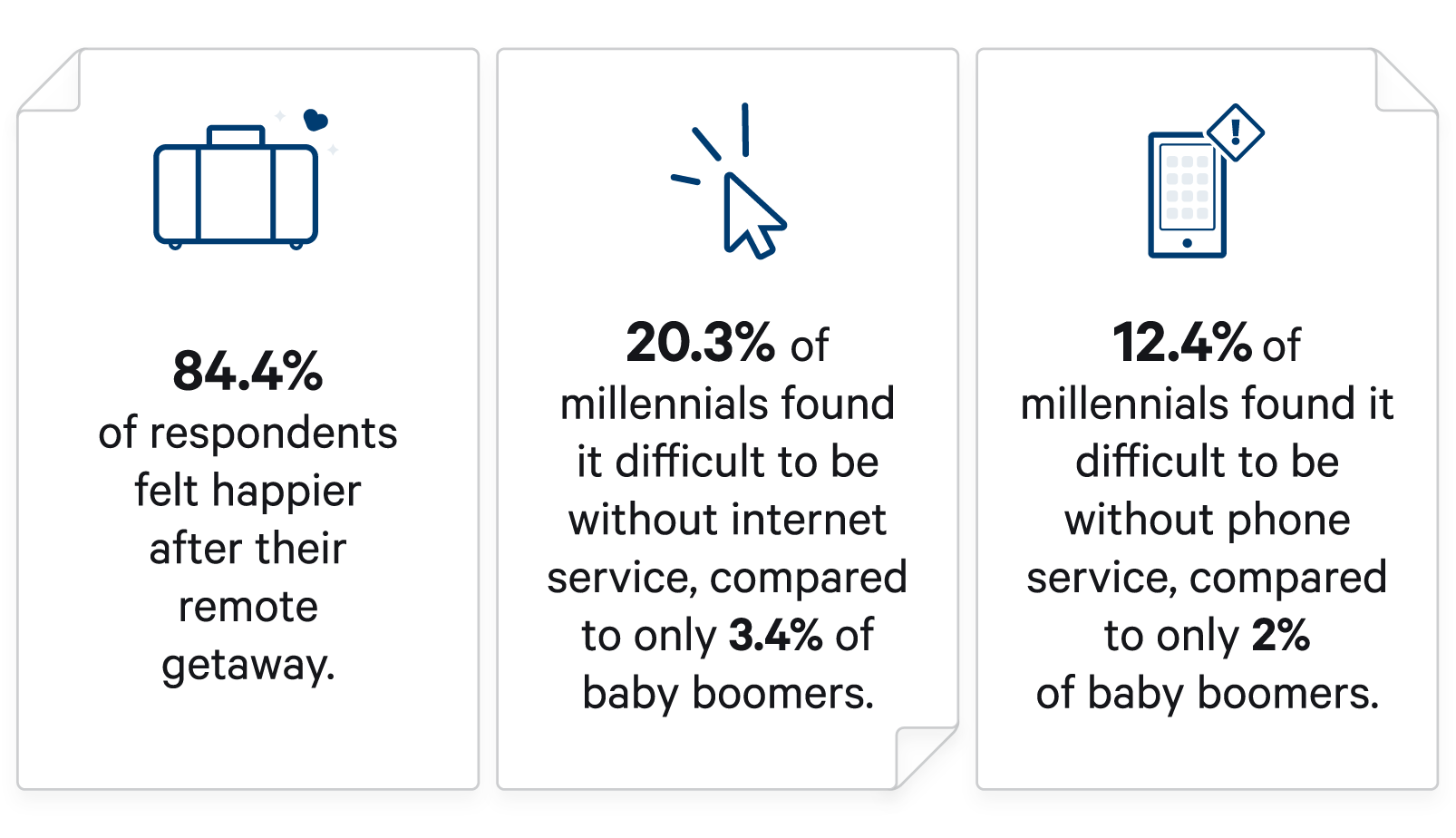 Phones have also been researched as standing in the way of our happiness, but it’s not always easy to start distancing ourselves from them. Giving up the phone was something millennials struggled with in particular. 20.3% found it difficult to be away from the internet, compared to just 3.4% of baby boomers. They were also the most likely generation to experience difficulty when they couldn’t find phone service during their remote experiences.

Digging a little further into the nature effect, respondents were next asked to focus on the mental changes they noticed before and after the trip. We asked them about stress, productivity, and overall mental health. 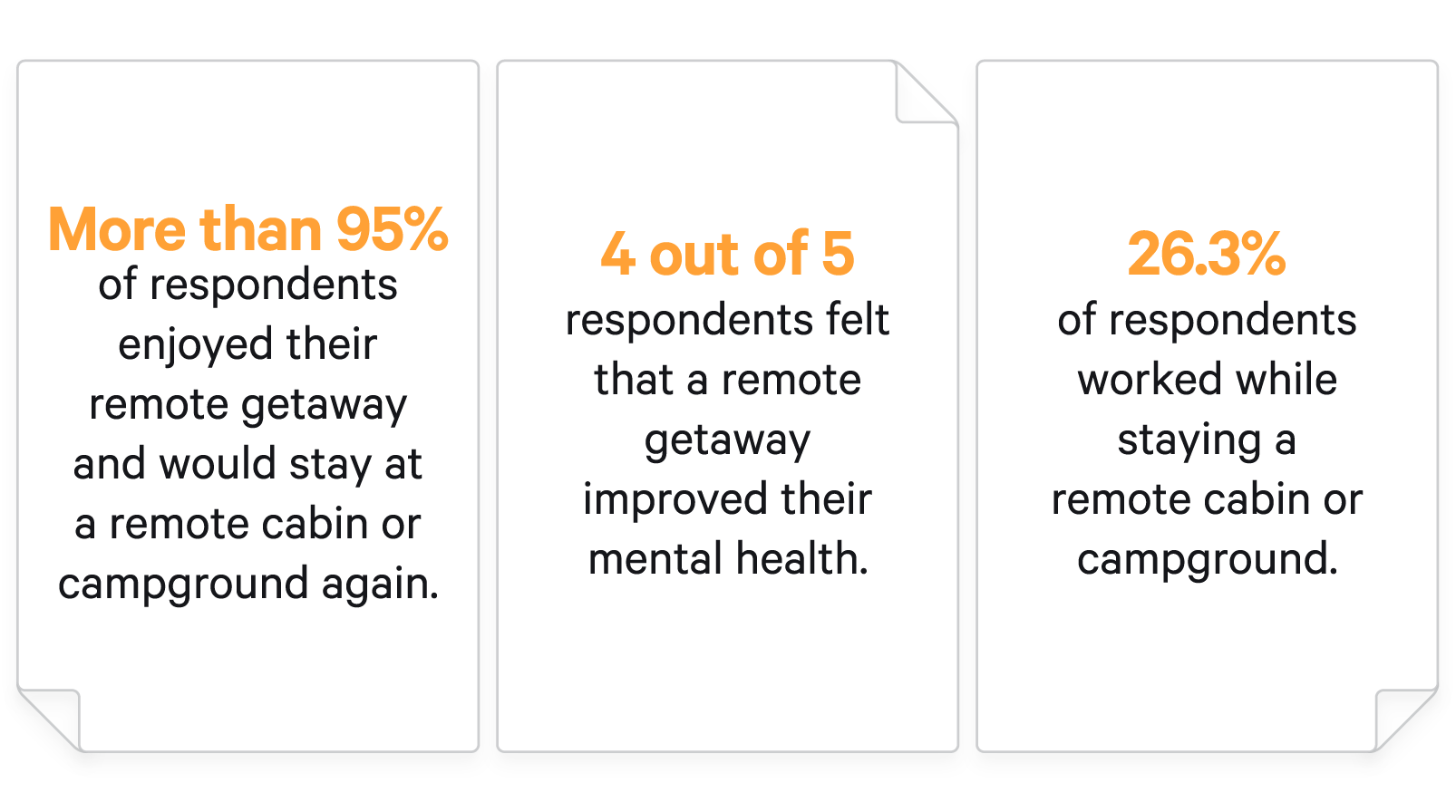 4 out of 5 respondents agreed that a remote getaway improved their mental health. If that wasn’t reason enough to go away, an even higher percentage (95%) said they were less stressed after staying at a remote cabin or campground. 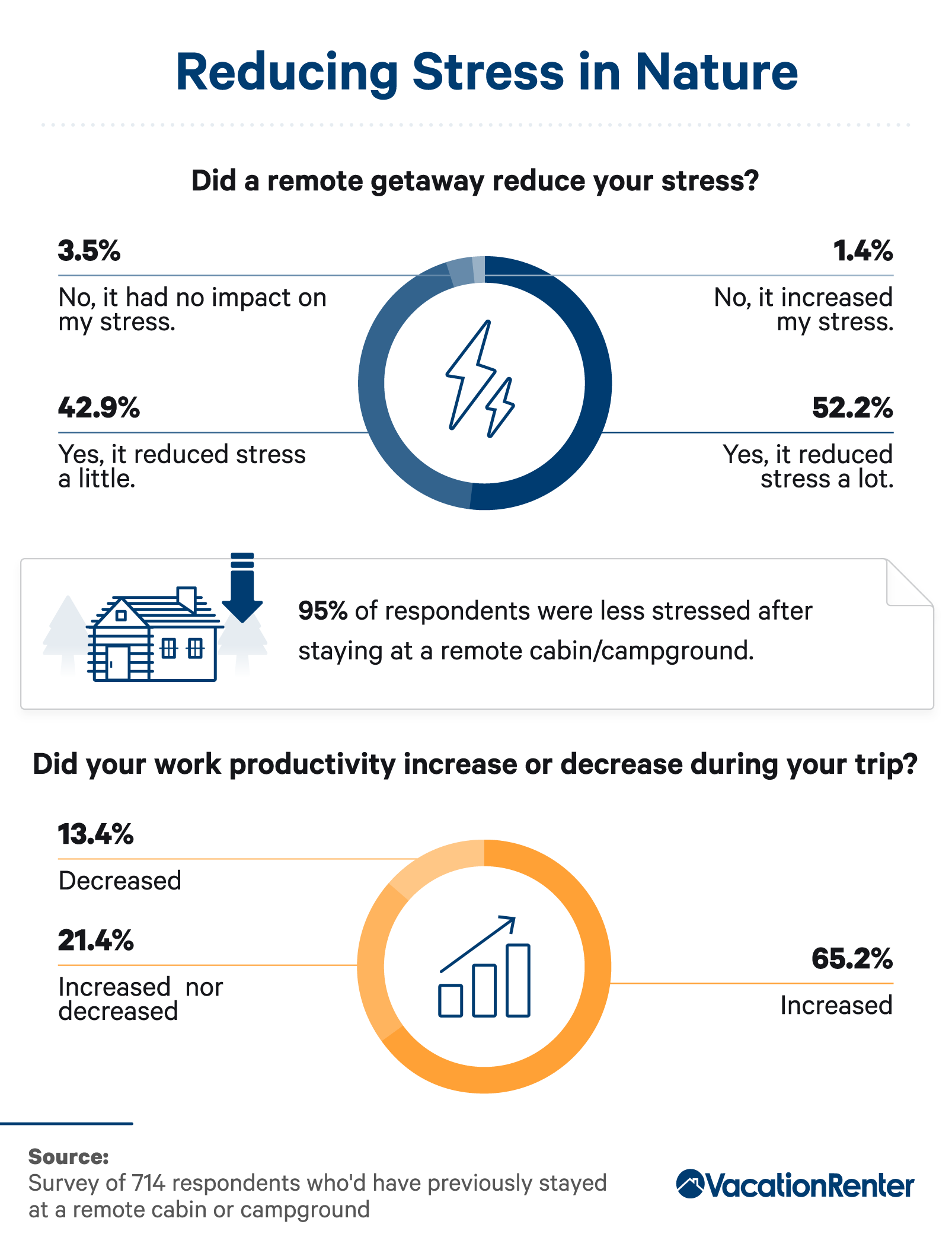 This lack of stress was not entirely due to the typical “vacation” mind, however. In fact, 26.3% of respondents continued working while away. Even the work itself appeared easier. Those who worked while remote noticed a significant uptick in their productivity levels. Happiness and productivity have been repeatedly proven to go hand in hand. Evidently, this holds true in even the most remote of locations.

In a separate survey, we only looked at respondents who had plans to travel to a remote campground or cabin this year. They shared their upcoming plans for 2021 with us. 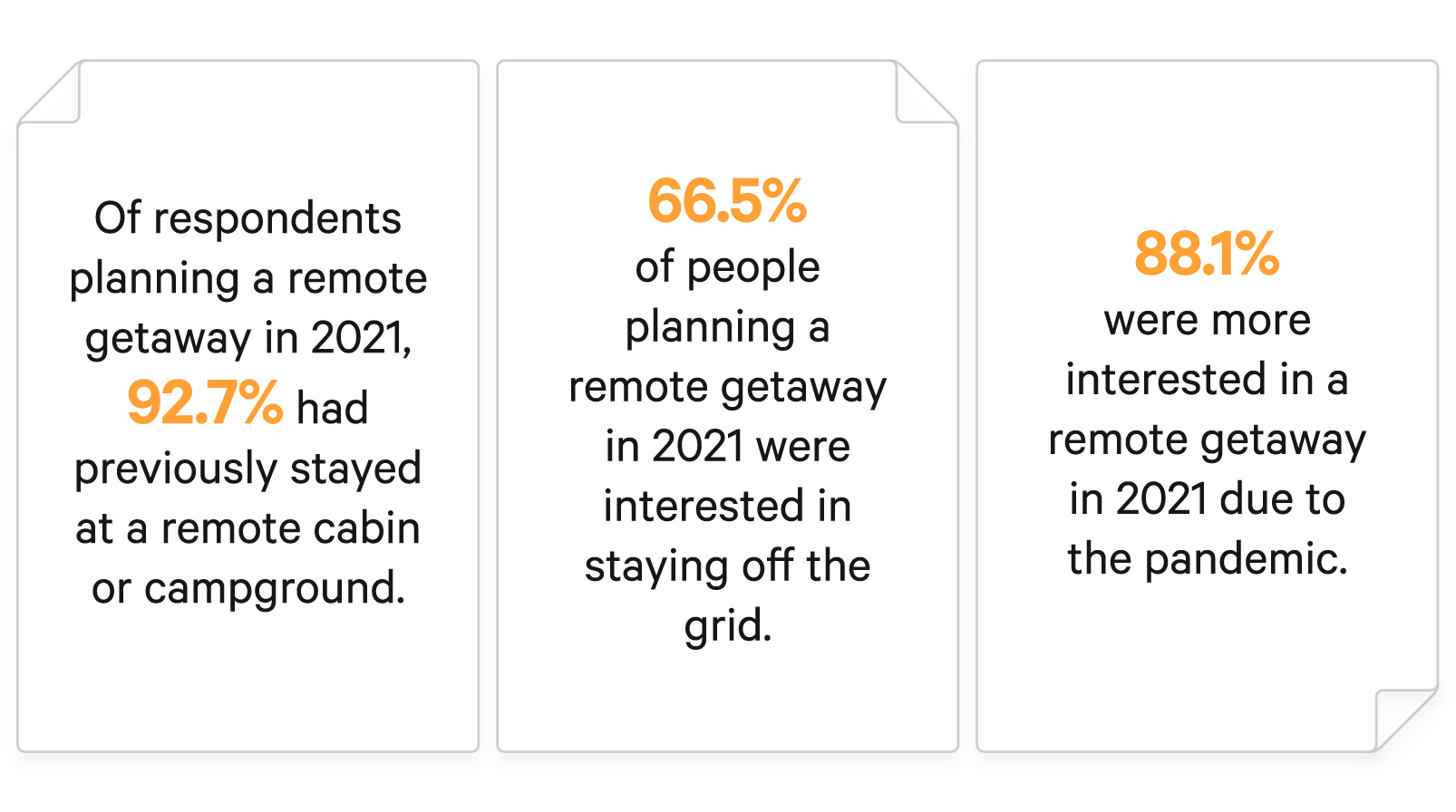 Even among those who hadn’t yet traveled, the idea of traveling was still in the works. More specifically, traveling while off the grid. Two-thirds of respondents wanted to travel this way in 2021. This was largely influenced by the pandemic, as 88.1% agreed that they were more interested in a remote type of getaway specifically because of the pandemic. If respondents who had tried it already are any indication, they’ll likely be happier for the decision. 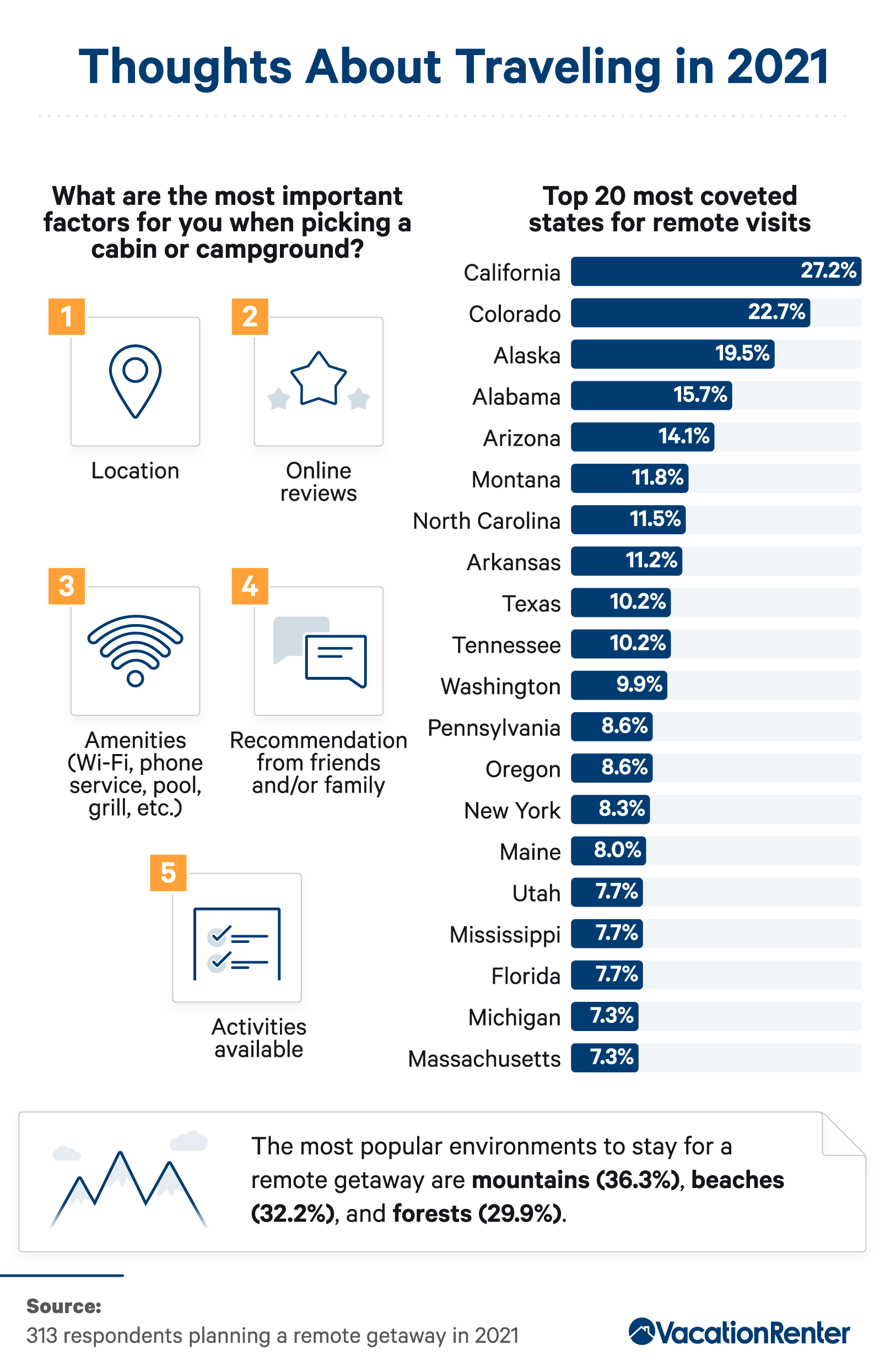 Location was the most important factor in travel to 81.7% of respondents, with most looking to California (27.2%), Colorado (22.7%), or even Alaska (19.5%) as refuge. In spite of looking to go off the grid, most respondents relied on some form of internet connection for their secluded getaway, as online reviews were the second most important planning factor behind location. 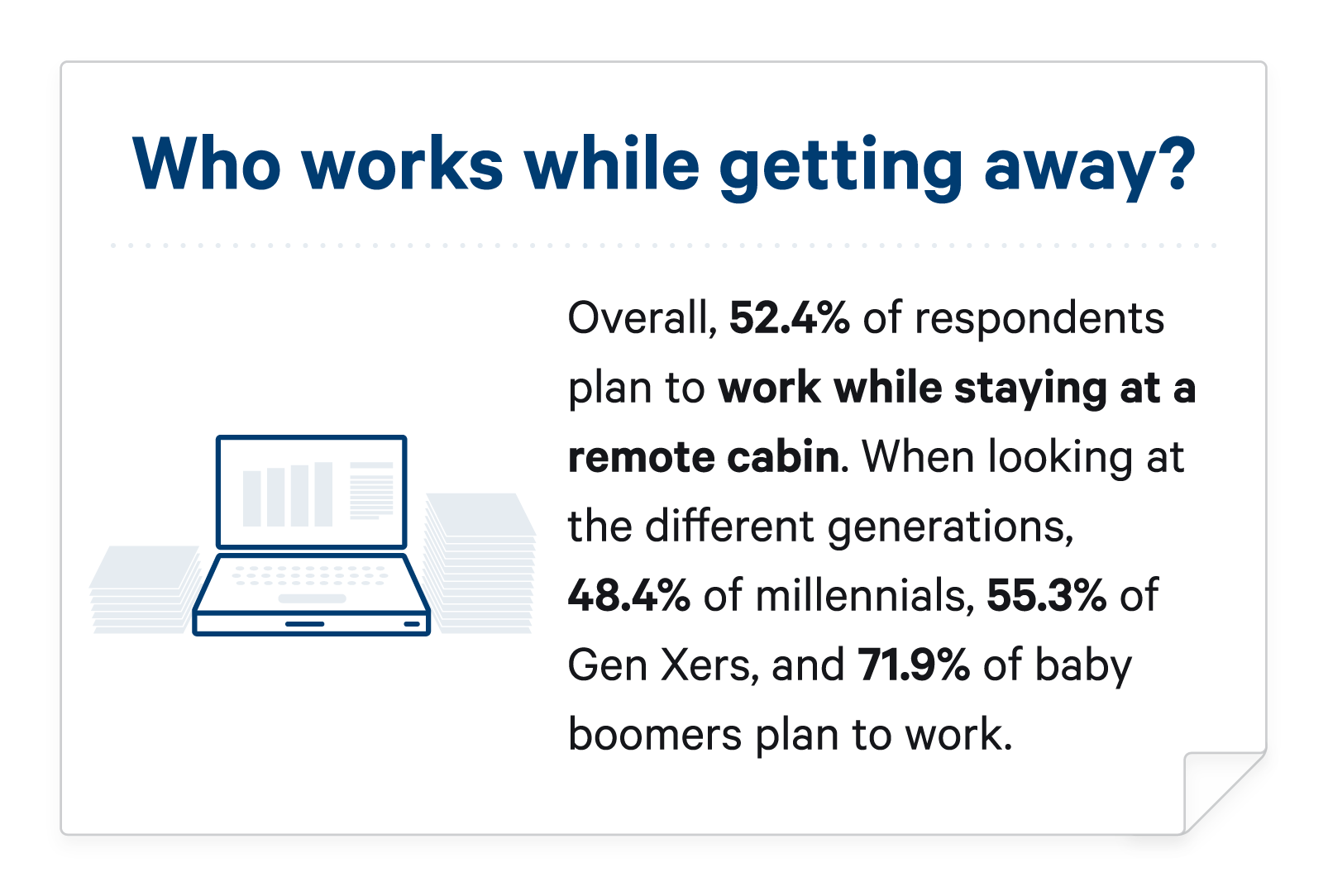 Remote work took on a much more literal meaning for many participants. Overall, 52.4% planned to work remotely in a cabin. Baby boomers were the most likely to consider this extremely remote work, while just under half of millennials could say the same. Considering how much more productive people felt while working from a remote cabin, perhaps even more will be willing to give it a try in the near future.

As cabins have made a positive impact on traveler’s lives over last year, you may want to consider a remote getaway as your next vacation. It’s social-distant friendly, cost-effective, and most respondents returned feeling happier, less stressed, and even more productive. At a time when mental health is being so heavily tested, a little nature could be just what the doctor ordered.

As respondents also shared, however, online research can be incredibly important in making the trip go right. This process can be a fun part of the experience, especially if you start with VacationRenter.

VacationRenter helps you find the absolute perfect rental for your next great getaway. Easily search and browse based on your specific needs and get inspired by all the world has to offer you. Just head to VacationRenter today to get started.

Getting out in nature is more important than ever. If you know someone who could benefit from some time outdoors or from the findings of this study, you are welcome to share the data with them. Just be sure you link back to this page and that your purposes are noncommercial.