America’s Up-and-Coming Cities: Where Are the Trendiest U.S. Destinations? 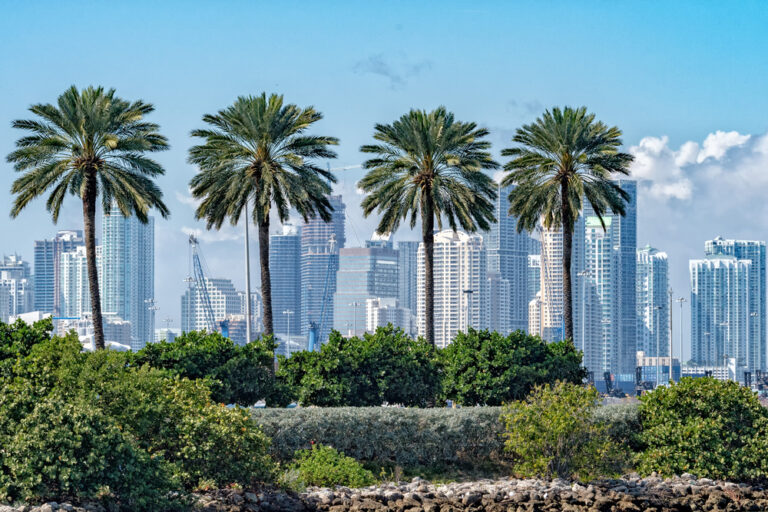 As America looks forward to returning to normalcy in 2021, priorities for most include reuniting with family and supporting local businesses. One thing Americans are especially looking forward to in 2021 is being one step closer to traveling again. Although it may take some time to return to life pre-pandemic, it’s clear that people are excited about the potential of packing their bags and exploring a new location safely.

And since it’s been a while since most people took a proper vacation — or spent a significant amount of time anywhere that wasn’t their home – we’re here to give you a recap of where the most trendy travel destinations are and popular activities to do once you get there.

So which cities are currently ranked as up-and-coming travel destinations? With the ingredients of a trendy destination in mind: places that are often associated with widespread cultural acceptance, tech-savvy, social awareness, and free-thinking – and data from Yelp Fusion APIs – we identified America’s top up-and-coming cities, plus the most unique things to do in each. Read on to see what we uncovered and the vacation destination you might want to start planning for when it’s safe to do so again.

What Makes a City Trendy?

To understand what makes a city up and coming, we surveyed over 1,000 people about what they look for in a modern and trendy travel destination. According to their responses, the five most common elements of these up-and-coming cities were:

While the threat of an increasing cost-of-living may be concerning for some, for others, it may signal that a city offers the ingredients of an exciting, up-and-coming area. 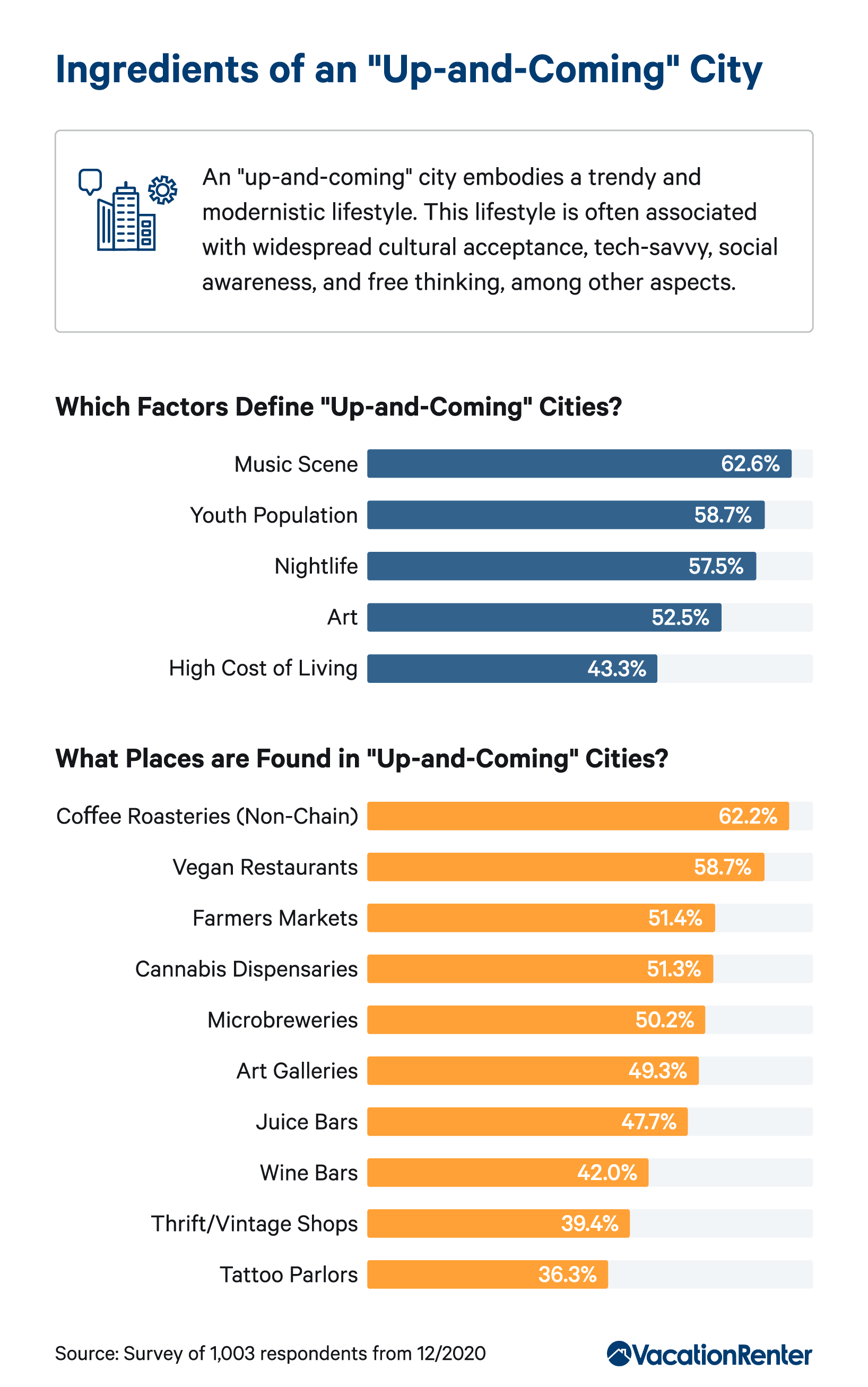 When asked what places are found in up-and-coming cities, respondents indicated these establishments were the most popular options

People we polled identified youthful residents as one of the ingredients of what makes an up-and-coming city so trendy, which may explain why some older respondents don’t feel as welcome in those areas. 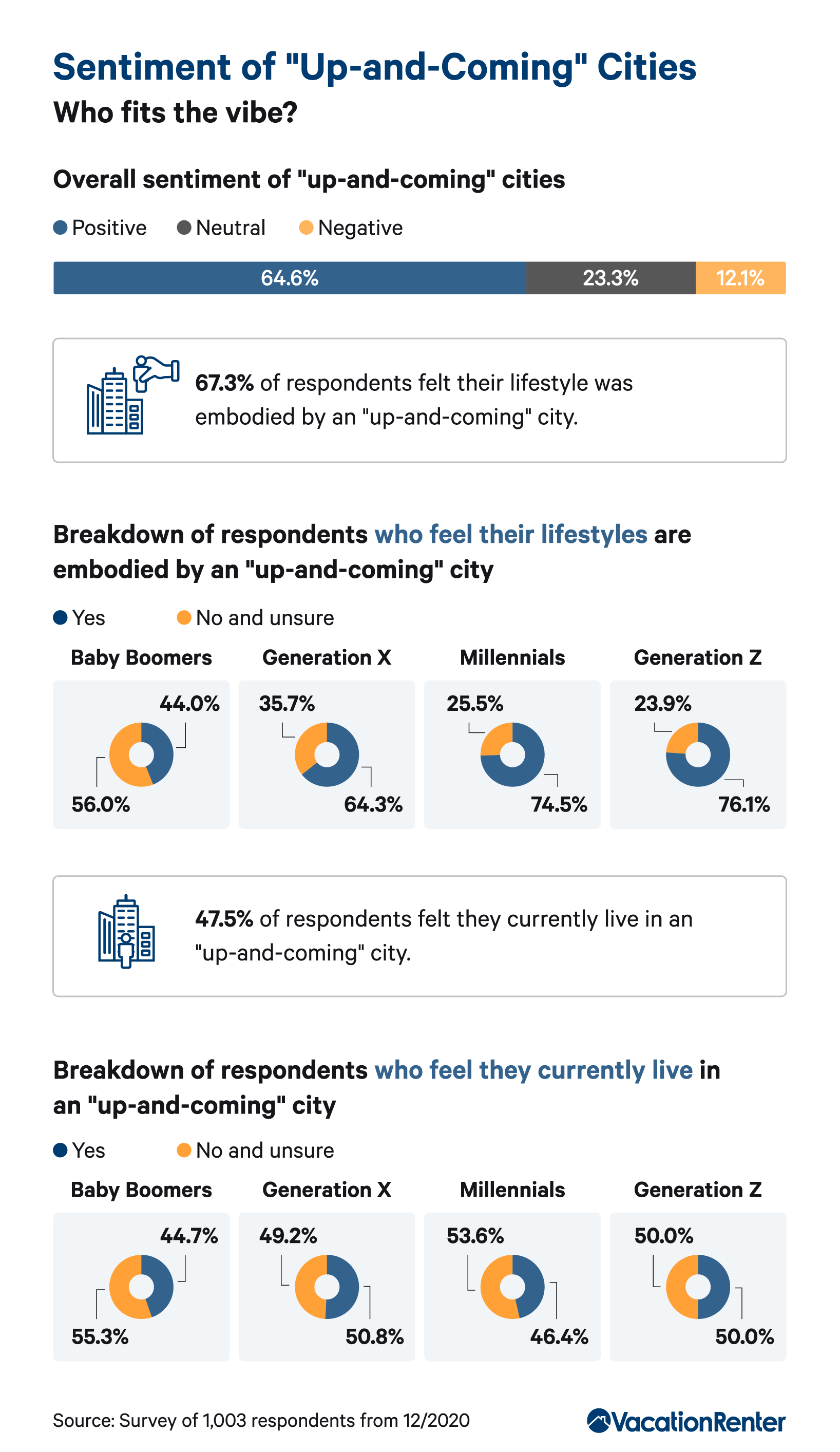 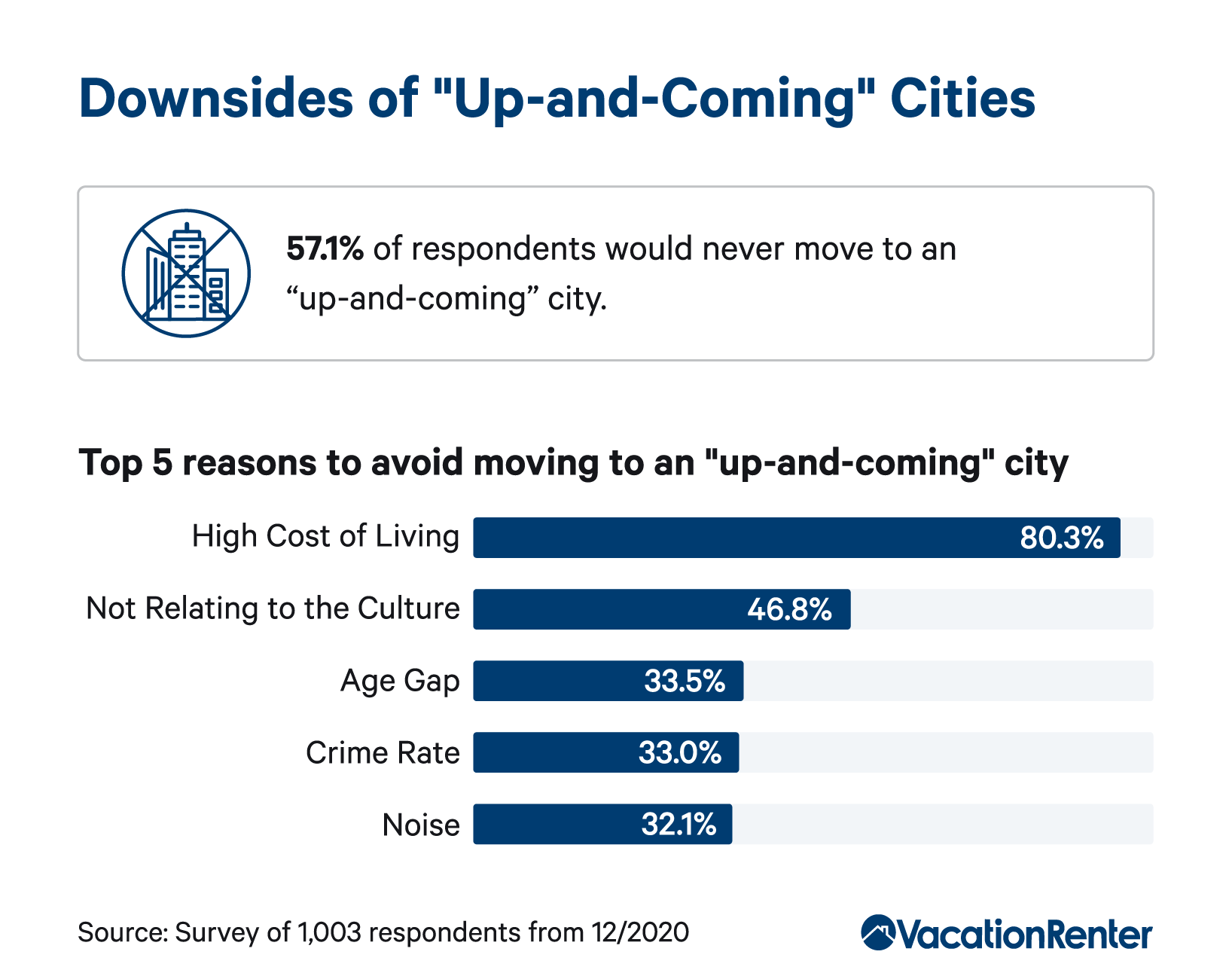 To identify the cities with the most trendy locations, we created the Up-and-Coming index by analyzing the number of trendy locations within a city and their ratings defined by the Yelp Fusion API. 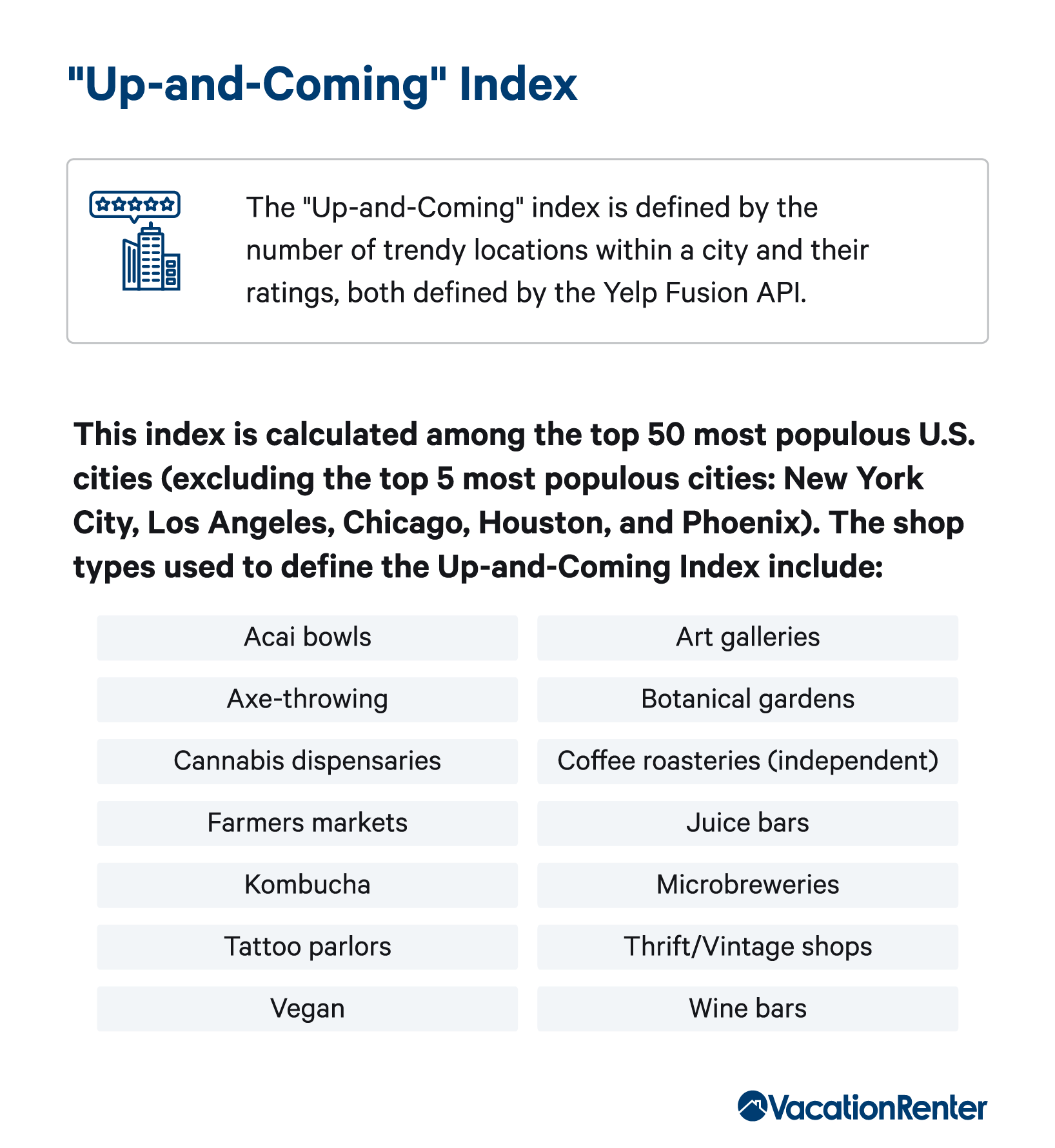 We isolated the 50 most populous cities in the U.S. excluding the top 5 (New York City, Los Angeles, Chicago, Houston, and Phoenix), as these cities are already established as major cities and can’t be deemed as up-and-coming. 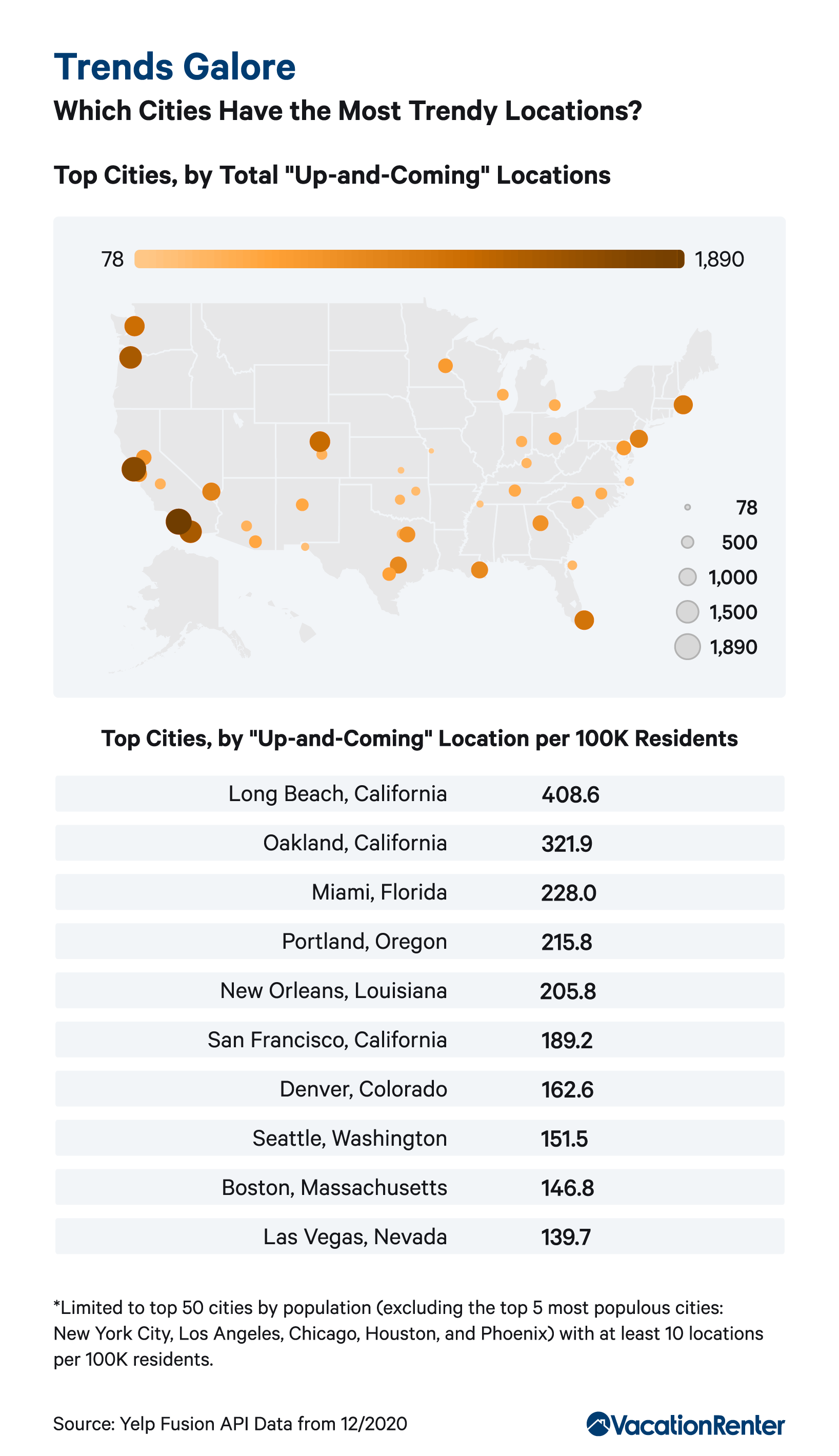 If you’re looking for up-and-coming travel locations where you’ll have no shortage of trendy things to do, there’s only one clear choice for where to go: Long Beach. With over 408 up-and-coming locations for every 100,000 residents, this Los Angeles neighbor is home to ample trendy locations minus the crowds. Drive roughly 6 hours north to Oakland, California (321 spots per 100K residents), or consider a different beach scene altogether in Miami, Florida (228 spots per 100K residents), to avoid packed juice bars or long lines for the ax-throwing experiences.

It’s nice to have a multitude of options if you’re looking for trendy things to do, but it can be even better to know that most of them have positive reviews online. 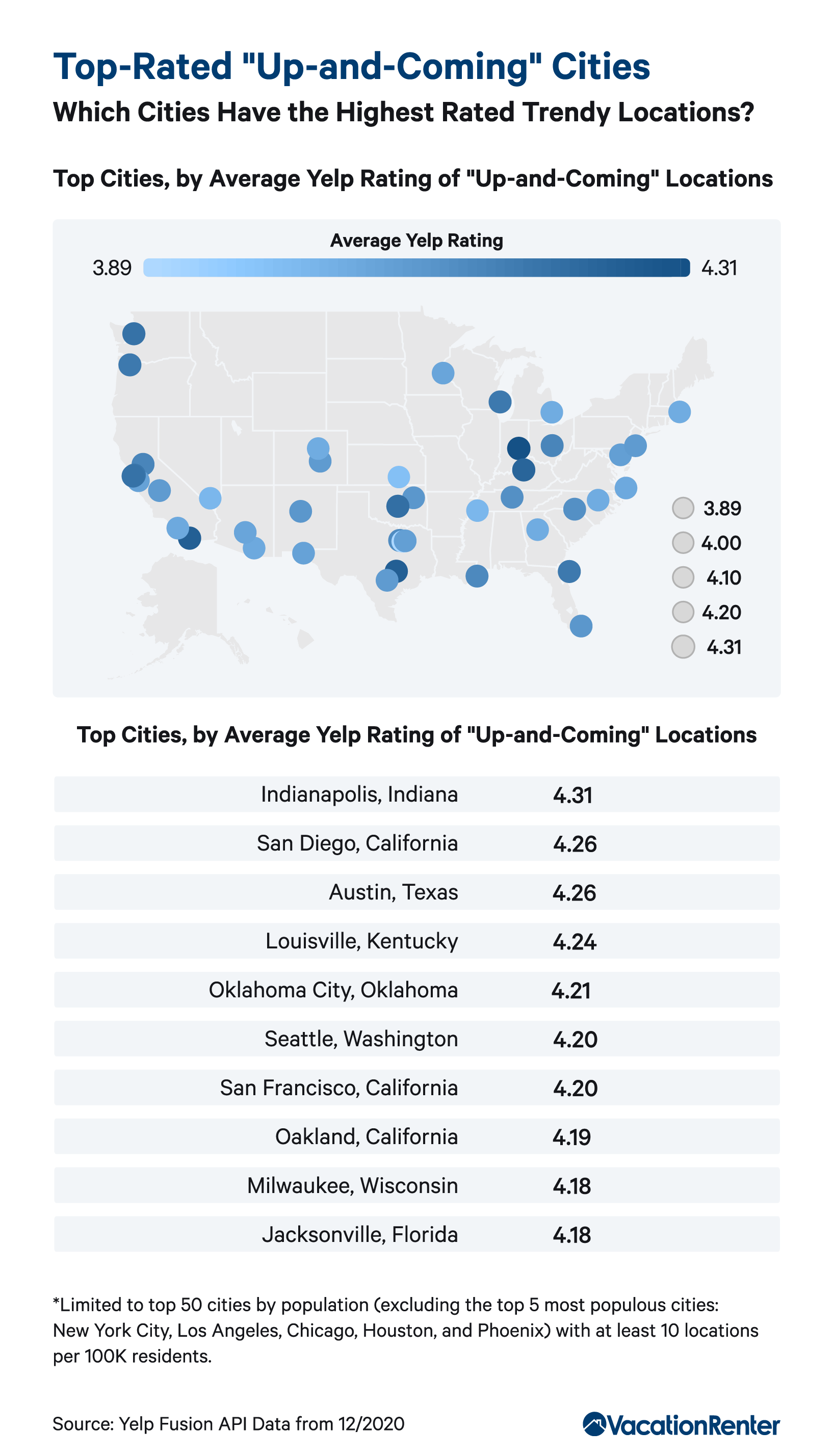 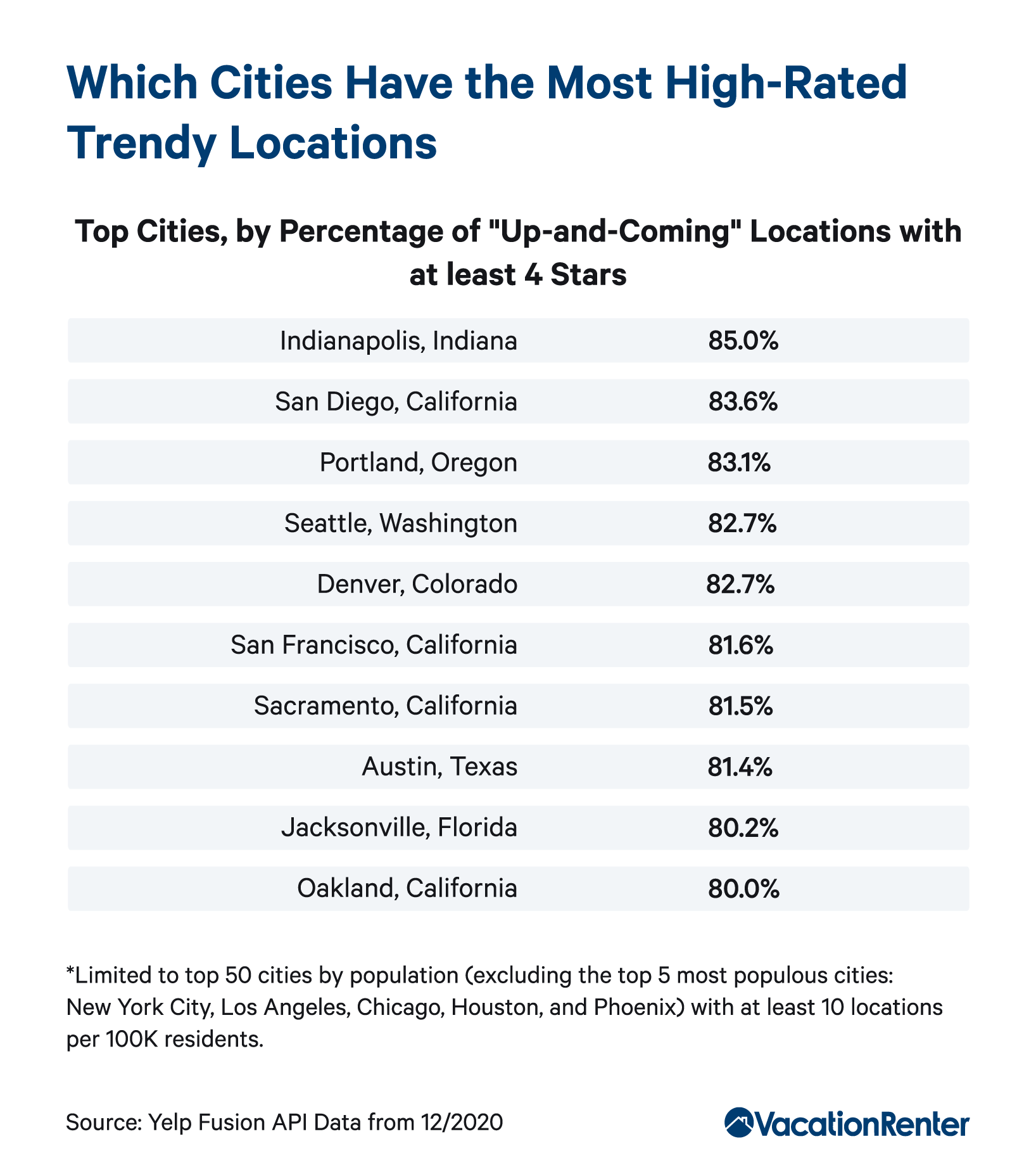 If you want to narrow your focus down to the things you most enjoy doing, consider this list of the best up-and-coming locations based on location types, including art galleries, juice bars, and vegan restaurants. 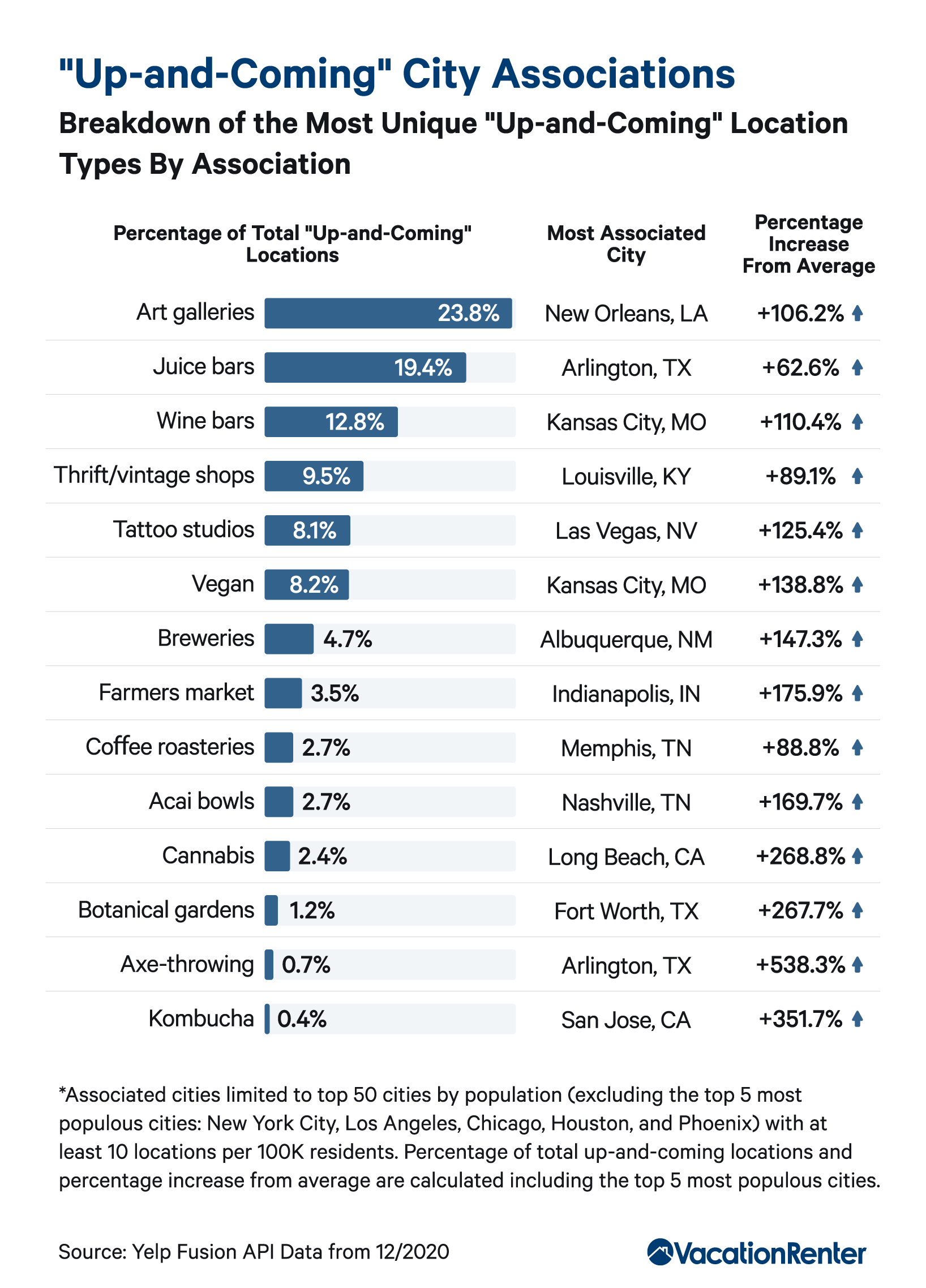 New Orleans, Louisiana is most associated with art galleries, as 49.1% of the trendy locations in the city pertain to art, more than double the average from any of the other cities we analyzed. Once you’ve had your fill of beignets and Bourbon Street, consider the near-endless number of contemporary studios and fine art the city has to offer. For juice bars, Arlington, Texas, has more options than you’ll find anywhere, but if you prefer something stronger, Kansas City, Missouri, has the highest density of wine bars. Saving room for amazing vegan cuisine? Kansas City also has 138.8% more vegan restaurants than the national average, including Mud Pie Vegan Bakery and The Mixx.

Finding Your Next Getaway

Whether you’re excited about finding local microbreweries or shopping in hidden gem thrift stores, you may not have to look far for trendy, up-and-coming travel destinations to visit when it’s safe to travel. Common vacation spots like Miami, San Francisco, and Seattle all made the cut, with plenty of options for botanical gardens and kombucha on tap. If you want to find the best-rated options though, you might need to consider more unsung destinations, including Indianapolis and San Diego, where 4-star locales flow like water.

Wherever you’re going after the pandemic, VacationRenter can help you get there. By helping you find the perfect vacation rental anywhere in the United States, from Cape Cod to California, and virtually everything in between, you can do what you love in a place that feels like home. Our team of travel enthusiasts is committed to helping you find the perfect rental by bringing all of the leading travel sites together – including Booking.com, HomeAway, Outdoorsy, and more – in one easy-to-use place. Whether you’re looking for a spot in the mountains or a bed by the sea, book your next vacation rental with us today!

The main limitation of this half of the study is the reliance on self-report, which is faced with several issues, such as, but not limited to, attribution, exaggeration, recency bias, and telescoping. Data are solely representative of self-reported claims by respondents. This survey ran in December 2020.

For the second half of the study, we collected data from the Yelp Fusion API for specific locations defining the “Up-and-Coming” index from the top 50 U.S. cities by population. Locations include Yelp results returned for “farmersmarket,” “coffeeroasteries,” “vintage,” “thrift_stores,” “tattoo,” “kombucha,” “juicebars,” “acaibowls,” “axethrowing,” “gardens,” “galleries,” “vegan,” “cannabisdispensaries,” “breweries,” and “wine_bars.” Data was requested on January 5, 2021. Data excludes chain establishments for coffee roasteries and wine bars (defined as restaurants with 15 or more U.S. locations) and locations that fall outside city limits. The final number of locations analyzed in this study is 36,583. The list of the top 50 most populous cities analyzed excluded cities within the group with less than 10 locations per 100,000 residents. We also excluded the top 5 most populous cities (New York City, Los Angeles, Chicago, Houston, and Phoenix) from appearing as an up-and-coming city due to their presence as already established cities, however, these cities were included in determining the national breakdown of up-and-coming locations and the national average of each up-and-coming location.

No statistical testing was performed, so the claims listed above for the second half of the study are based on means alone. As such, this content is exploratory and is presented for informational purposes only.

Are your readers itching to get away? Help them plan for traveling again by sharing the results of this study for any noncommercial use. We simply ask that you include a link back to this page in your story as a credit to our incredible team of contributors for their work on this report.