Must See In Portland: 10 Fun & Interesting Things To Check Out 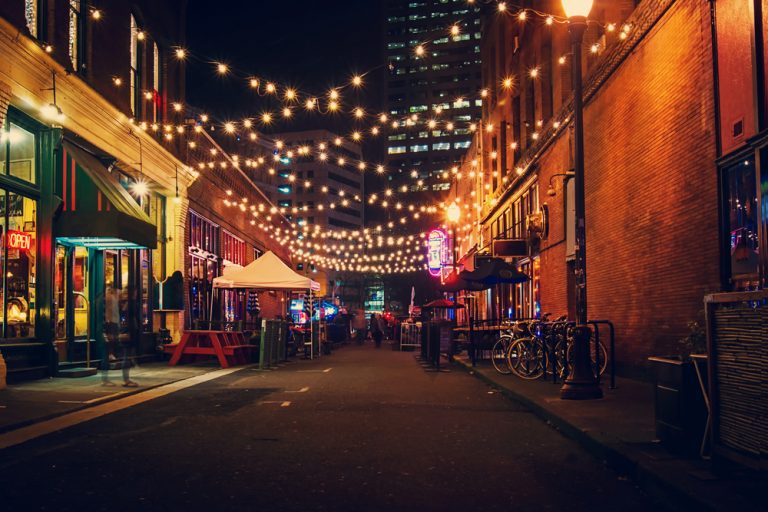 When you visit Portland, Oregon, it’s easy to hit the typical hot spots where all the tourists go, such as Washington Park and the Japanese Garden. If you really want to experience the city like a local, put these cool places on your vacation bucket list. You might not have realized that Portland is home to so many unusual spots until you see them for yourself. Check out our list of cool places in Portland to check out on your next trip.

The Aerial Tram will take you up in the air, moving 3,300 linear feet between South Waterfront and Marquam Hill on the Oregon Health & Science University main campus. During your four-minute ride, you’ll gain 500 feet in elevation while moving 22 miles per hour. From the air, be ready to experience breathtaking views of the Willamette River Valley and downtown Portland. This is quite possibly the most “Portland” view of Portland you can get. 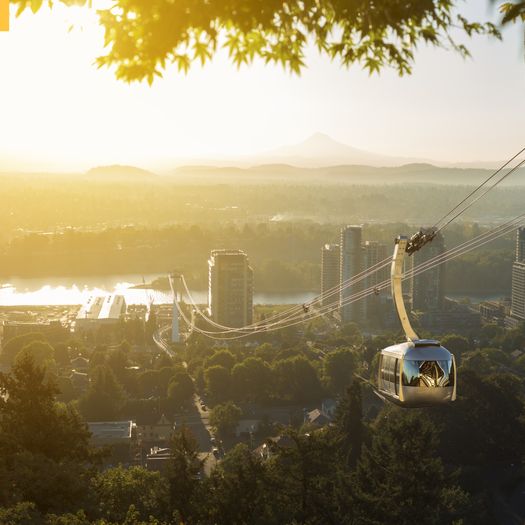 After taking the tram back down to the waterfront, walk a few blocks down to Blue Star Donuts, a gourmet shop serving up the most creative donut varieties Portland has ever seen. Our personal favorite is the Blueberry Basil Cake, but we recommend trying them all to find your favorite!

Located in Forest Park, the Witch’s Castle is the source of some interesting local ghost stories. Visit for yourself to decide whether it’s haunted or not, if you dare. The hike starts on Lower Macleay Trail where you’ll follow Balch Creek for less than one mile. Before you know it, you’ll arrive at Stone House, also called the Witch’s Castle. There’s a sordid story surrounding this house that involves forbidden love, a murder, and an eventual hanging, which led to ghostly presences being reported around the property. After you explore the Witch’s Castle, you can keep walking along Wildwood Trail until you get to Pittock Mansion, which is a popular tourist attraction in Portland.

Forest Park is an absolutely lovely place to explore and have a nice picnic. Either pack yourself a lunch, or grab a massive sandwich from Kornblatt’s Delicatessen, Portland’s best New York-style deli, before heading into the woods.

Thousands of people gather in Portland every summer to participate in Portland’s Naked Bike Ride. This event, occurring every June since 2004, is a true sight to behold. This Naked Bike Ride is actually the world’s largest annual nude bike ride, and a way for Portlanders to protest against the world’s dependence on oil. Over 10,000 people rode their bikes in the nude at the 2015 protest. Even if it’s not something you want to participate in, it’s definitely one of the more interesting and unusual things to experience in Portland.

If you got carried away in the excitement and tossed your clothes to the street, you’re in luck! Hawthorne street in SW Portland is well known for its many thrift stores. Go pick up some new digs at Crossroads Trading, where you’ll find nice threads at an affordable price. If you’re going to be spending time in Portland, you might as well dress like a Portlander.

Visiting huge parks with sprawling green spaces is a common activity for tourists. How about visiting the world’s smallest park instead? Mill Ends Park in Portland comes in at the top of the list of smallest parks at only two feet in diameter. You’ll find it in the median where Southwest Naito Parkway and Taylor Street intersect. Dedicated in 1948, this tiny circle of land officially became a park in 1976. Over the years, contributions have come in for park improvements, so you’ll find a tiny swimming pool, a miniature Ferris wheel and more in this park. 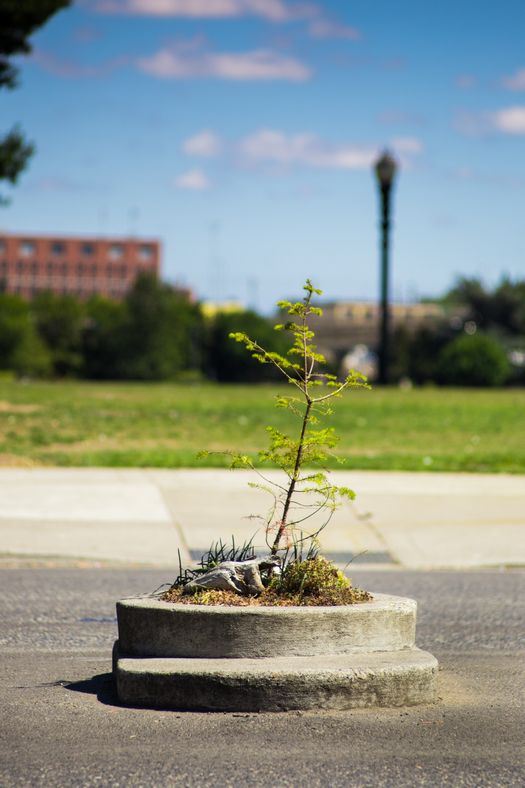 If you’d also like to visit a park you can actually walk through, Waterfront Park is only a few steps away. It offers a nice bike path that goes along the water, as well as Salmon Street Springs, a beautiful water feature in the middle of the park. You’ll also find Kerr Bike Rentals in this park, so you can get some wheels and explore Portland the way many locals do.

Those into the scary and unusual should check out the most haunted place in the country: Shanghai Tunnels. A network of kidnappers smuggled people through these tunnels, and it’s rumored that some visitors can hear their screams and moans during the tour. If you’re at all curious about these shady activities, don’t miss a chance for an underground walking tour of the Shanghai Tunnels. You’ll be guided by knowledgeable tour guides who will tell you fascinating and sordid stories about these unsavory activities. 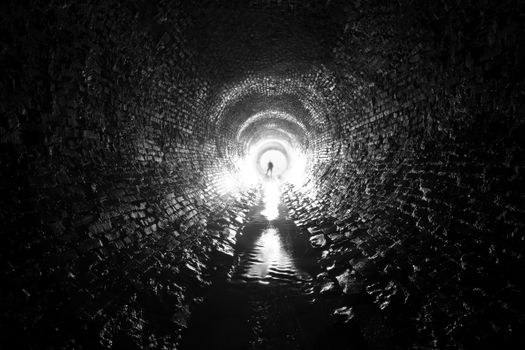 After your tour, you can grab a drink or two at the Shanghai Tunnel Bar just a couple of blocks away. An underground establishment with a great menu selection of food, beers, and cocktails. We love the Crouching Tiger, a concoction of Pendelton whiskey, fresh ginger, lemonade and ginger ale, to keep you cool and refreshed for your journey back above ground.

St. John’s Bridge spans the Willamette River, while Cathedral Park lies beneath, with great views of the bridge. Dating back to 1931 when work was completed on this cable suspension bridge, it was once the longest bridge of its kind west of the Mississippi River. The Gothic architecture makes for an impressive sight, definitely worthy of a few pictures to add to your vacation album.

After strolling through Cathedral Park, you should take some time to explore some more of the St. John’s neighborhood. It wouldn’t really be a trip to PDX without stopping at one of McMenamins’ Establishments, so why not their St. John’s Theatre and Pub? McMenamins is a locally owned chain of establishments known for renovating historic buildings around Portland, and serving high-quality grub and libation. They create a cozy atmosphere that will beckon you to try each one of their establishments.

The World Forestry Center can be found in Washington Park, a 458 acre section of land that hosts a variety of museums and gardens. Anyone who ever wanted to learn more about trees will love exploring this museum. With exhibits to present Pacific Northwest forests and their integral role in wood production, animal habitats, ecology, and recreation, you can’t help but be entertained while you learn. You’ll also find a wide array of exhibits to educate visitors about the importance of global forests. 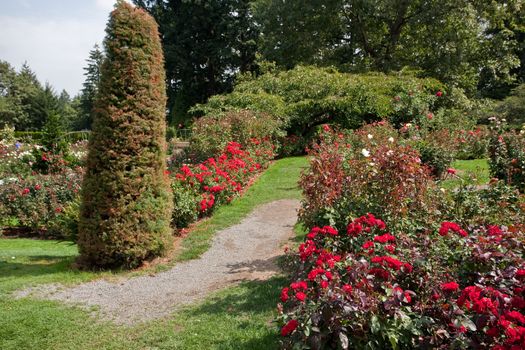 Don’t miss a chance to pay a visit to the animals at the Oregon Zoo during your stay in Portland. The zoo features five different areas, grouping animals together based on continents and habitats. You can tour Africa, Asia, Fragile Forests, the Great Northwest and the Pacific Shores. If you have a favorite animal or two, be sure to put them on your list of creatures to see. You could also schedule special behind-the-scenes tours to meet animals or chat with zookeepers.

During the summer months, you can actually catch a concert at the zoo! You can rock out to your favorite tunes while visiting your favorite animals. In the past, big names in music, such as John Prine, Les Claypool, and The Doobie Brothers have graced the stage with their presence.

Imagine the ethereal peace you can experience by spending a day at the Portland Japanese Garden. A must-see in Portland, Oregon, this garden is a 12 acre plot established in 1963 in honor of Portland’s sister city, Sapporo, Japan. Former Japanese Ambassador, Nobuo Matsunaga, stated that this garden was “the most beautiful and authentic Japanese garden in the world outside of Japan.”If you allow yourself to slow down and really drink in the simple and stunning beauty of this garden, you may never look at a garden the same way again. As you wander and explore, you will not only be learning about nature, you’ll be learning about Japanese culture as well. Volunteers are available between May 1 and Labor Day between 2:00 p.m. and 4:00 p.m. to give guided tours. These tours are included with your admission into the garden. You might also enjoy exploring the indoor exhibitions, which delve even deeper into Japanese culture.

It’s no surprise that Portland is home to the largest collection of hats in the country. The National Hat Museum contains almost 2,200 men’s and women’s hats dating as far back as 1820. You’ll learn about hat styles and how they’ve changed over the past two centuries. The collection contains hats made from many unique materials, including horsehair, feathers, straw, silk, and even mushrooms! Even if you know nothing about hats, you’ll leave this museum with more hat knowledge than you’ll know what to do with. These interesting and quirky experiences are what make Portland the uniquely vibrant city that it is. 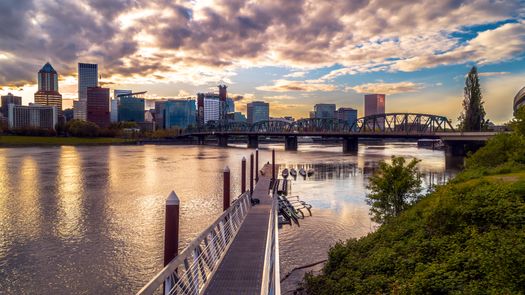 The City of Roses is Waiting for You

Step out of the ordinary as you explore all of these things to do in Portland. A city filled with experiences unlike any other, you’ll never run out of things to do and see here. We hope you take the time to check out all of these cool places in Portland, Oregon. This exciting city has much more to offer than you may realize.