Tips for Traveling Alone, According to 1,000 Globetrotters 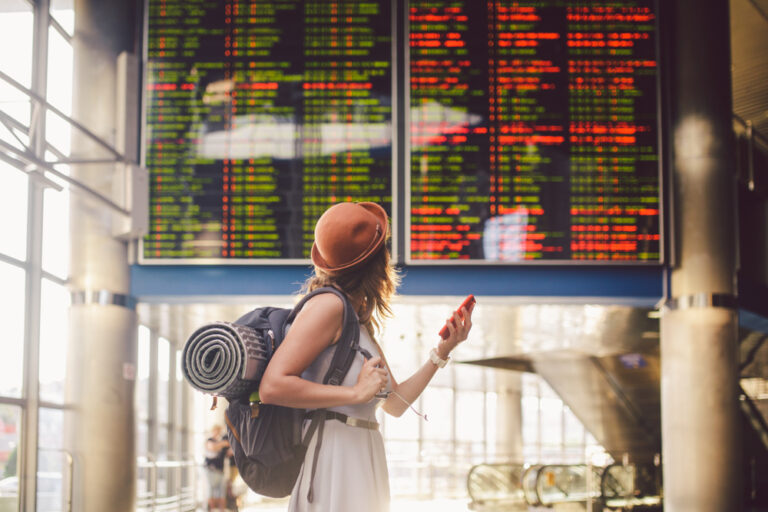 For many singles, traveling alone has become the new normal. Solo travel is a great way to improve your knowledge of the world by expanding your horizons and learning about different places and their cultures. However, it can be dangerous if done alone, especially in certain locations.

To learn how to travel alone safely and enjoyably, we surveyed 1,000 solo travelers about what they bring with them on their voyages and what actions they take to keep themselves safe. Keep reading to find out which cities and countries solo travelers feel most safe in. Also, find out what they can’t leave home without, what they study up on before departing, and tips to make solo traveling memorable.

Who Are Solo Travelers and Where Do They Go?

Solo travelers averaged three trips annually and were surveyed on the most popular destinations for national and international travel. They were also asked about their perception of safety in different U.S. cities and other countries. 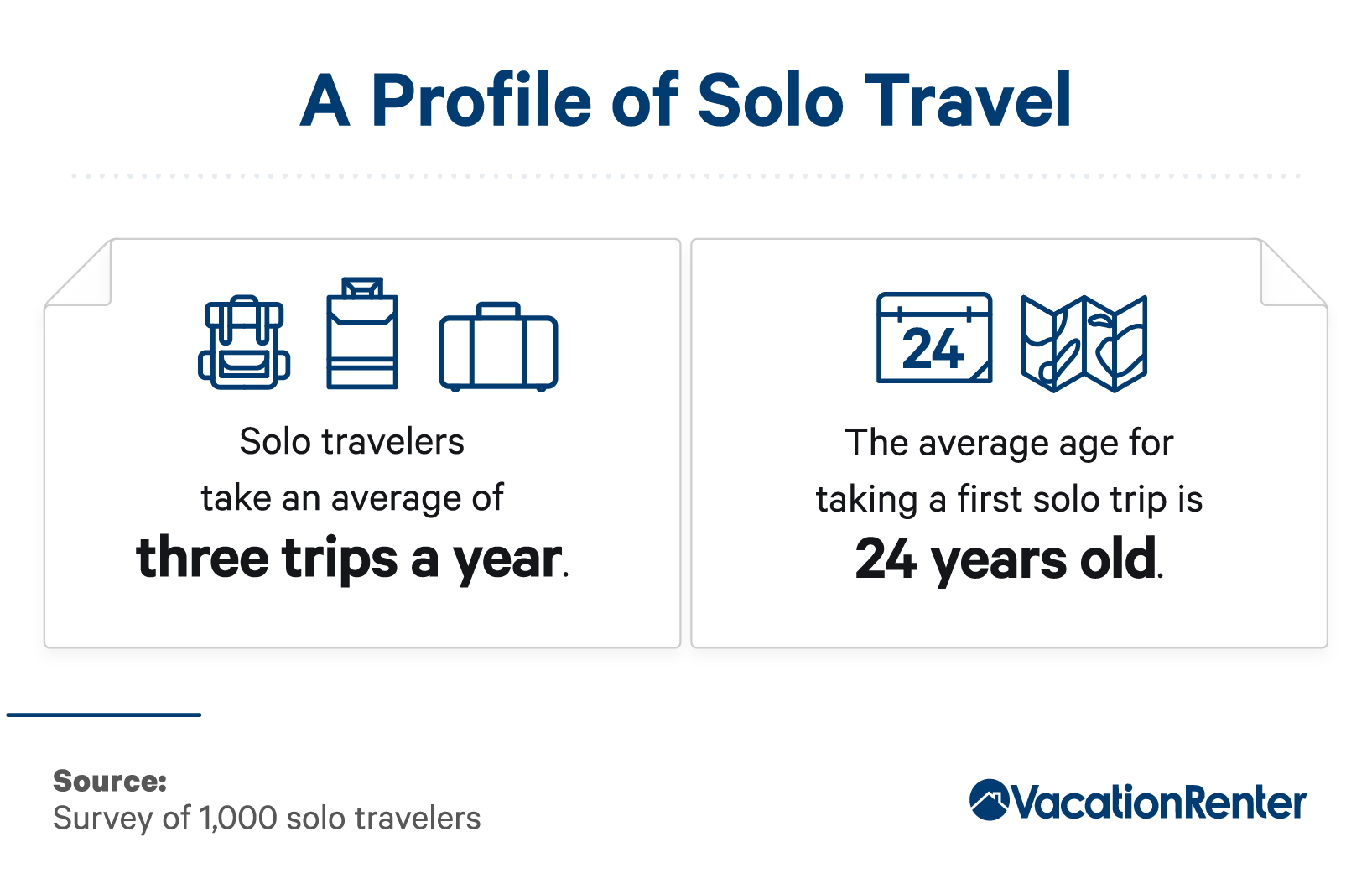 Location popularity and perception of safety varied depending on the age, gender, and experience of these travelers.

As for countries, they listed Singapore, Germany, and Japan as the safest. For novices, the top three safest cities were: 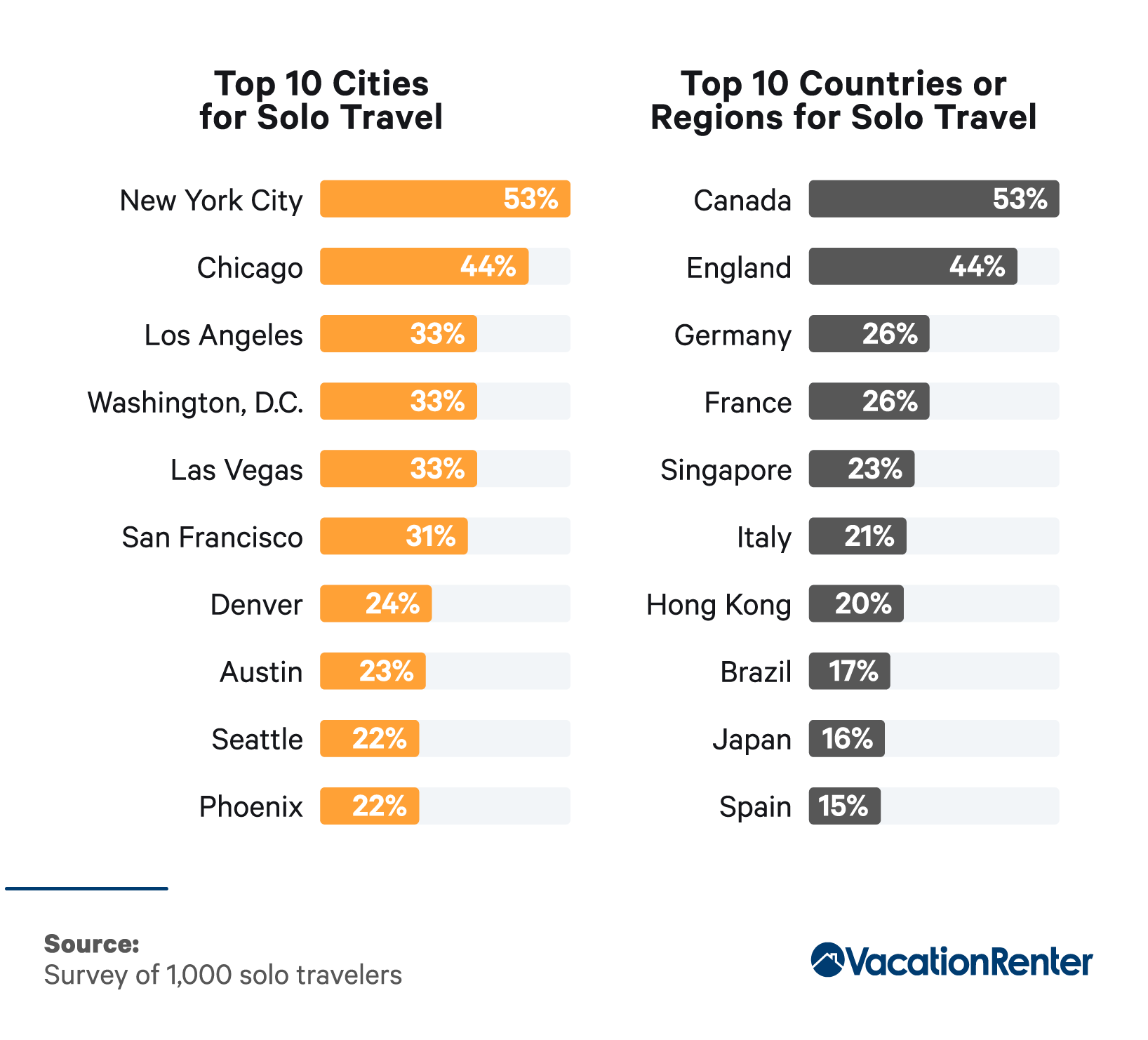 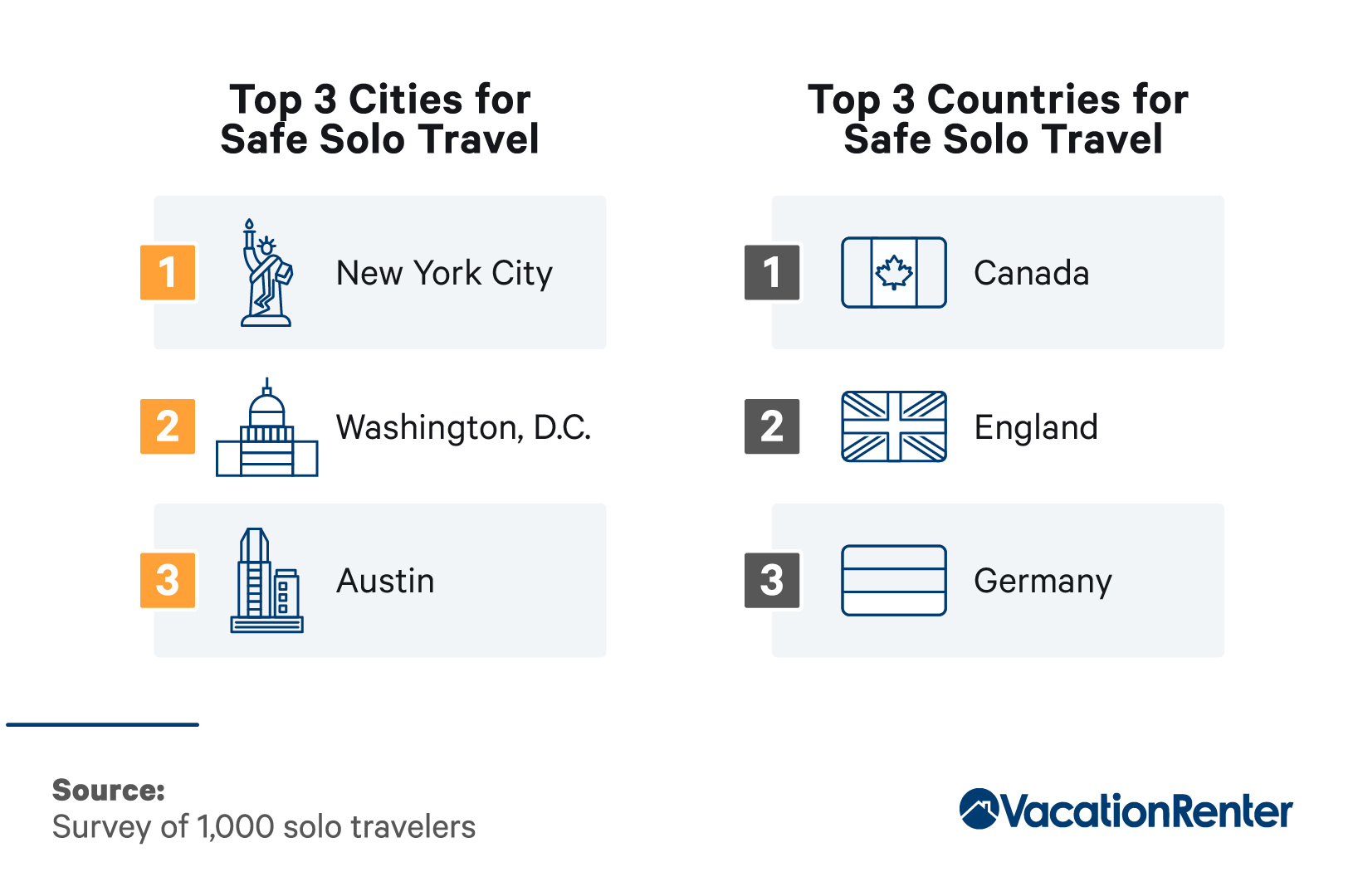 Rankings for the most popular cities and countries – as well as the safest – varied across age groups. Here’s how they measured up:

Before taking a solo trip, it’s essential to research the safety of the area you plan to visit. In our survey, we asked solo travelers where they get their safety information. Interestingly, advanced solo travelers were more likely to rely on Instagram and other social media for safety insights, while novices relied mostly on family, friends, official websites, and news. Almost half (48%) had even gone as far as taking a self-defense class in preparation for their trip. 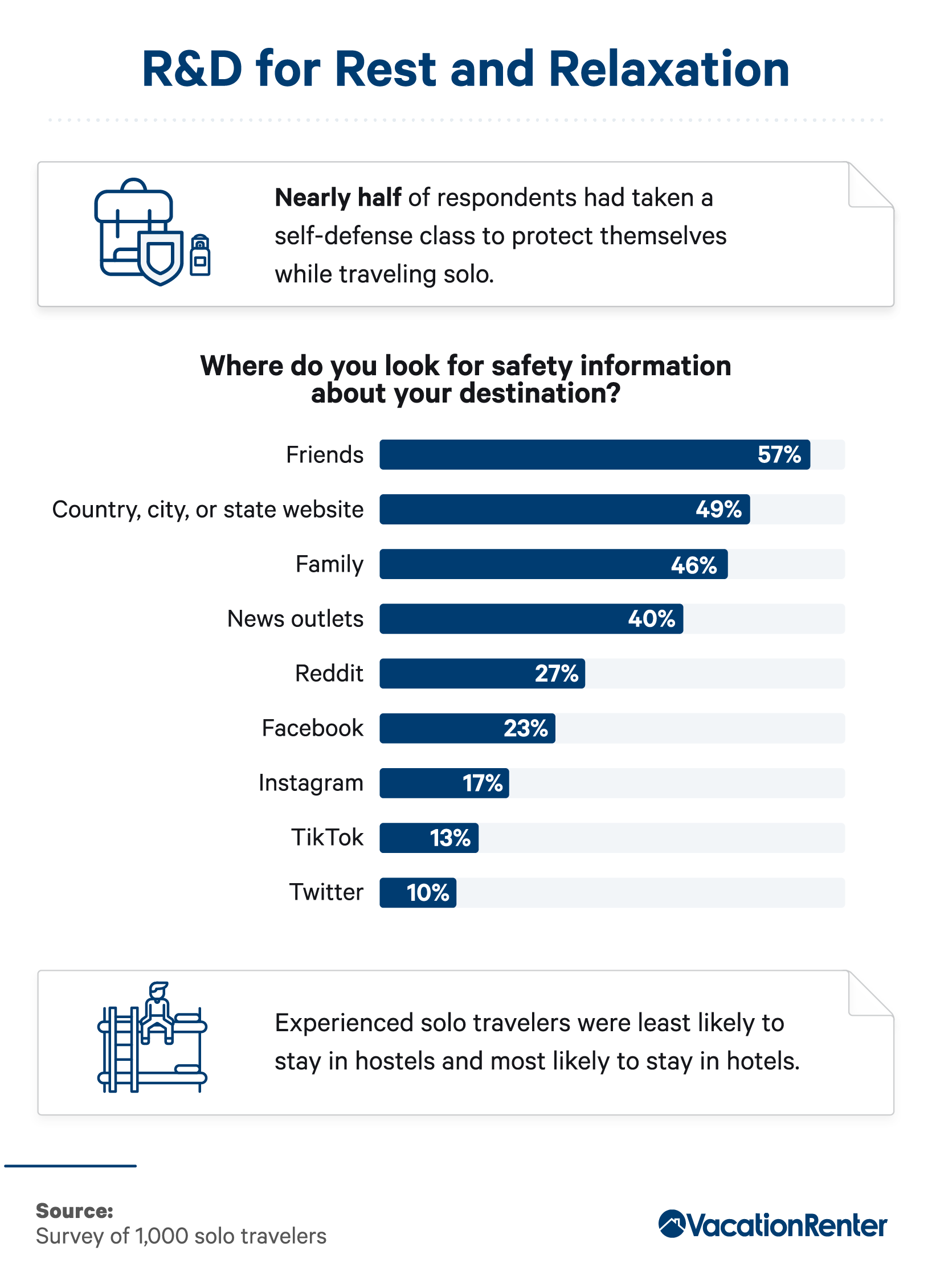 Planning for a solo trip also includes saving money and researching places to stay. While, advanced solo travelers were least likely to stay in a hostel and most likely to stay in a hotel, hostels can cut costs by offering shared dorms and facilities, making them a unique and affordable option. They often appeal to younger, novice travelers, not only because they fit their budget, but also because they offer increased opportunities to meet other people. However, the lack of privacy can be a safety concern. 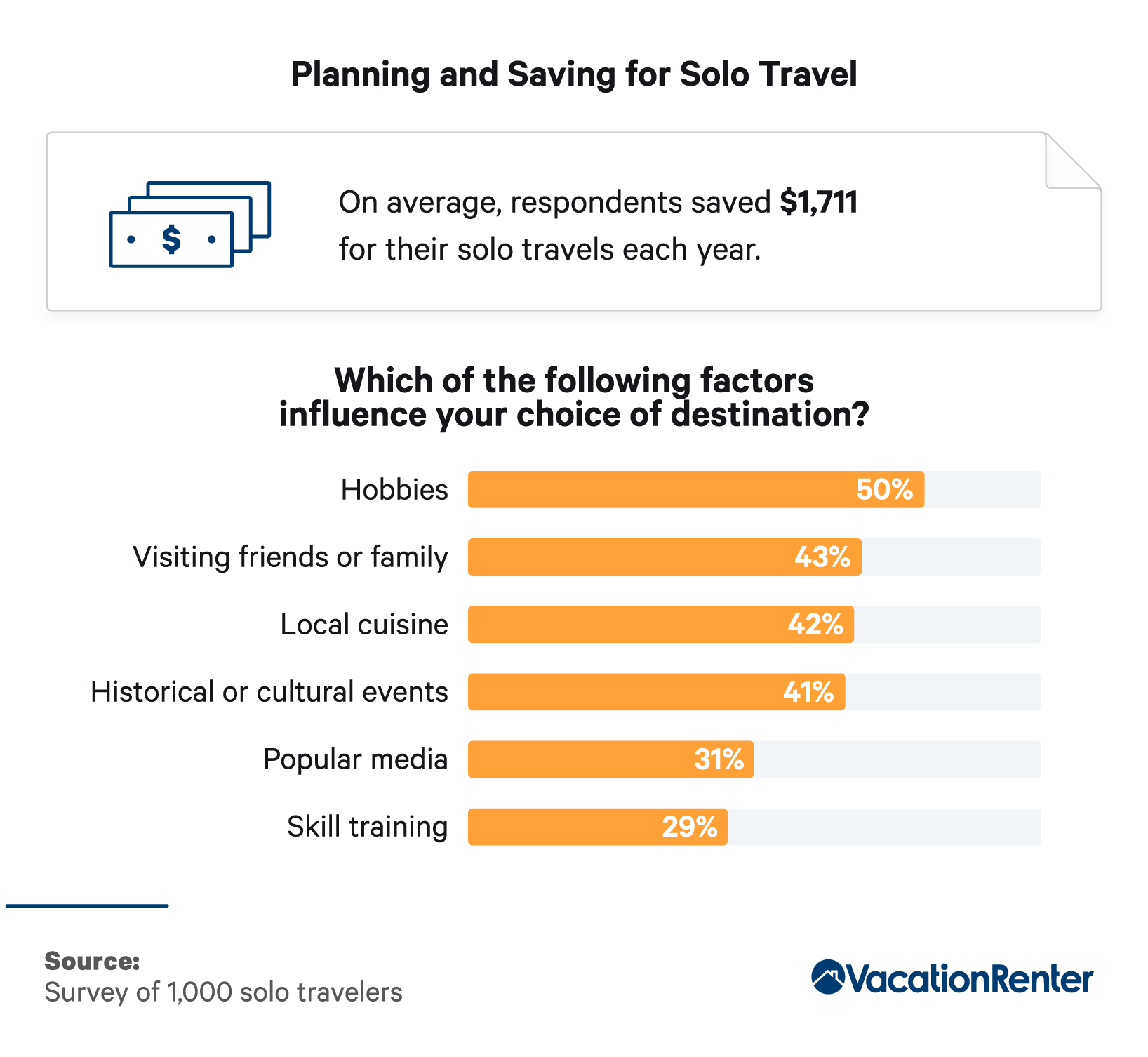 How much our respondents typically budget for their trips varied according to travel experience. On average, a novice solo traveler saved $1,253 a year for solo travel, while an advanced one saved $2,059. The amount saved also fluctuated based on age:

This shows that as respondents aged, they saved less on solo travel. Perhaps because empty nesters have more disposable income to spend while on vacation.

In light of the risks often associated with traveling alone, we surveyed to see how supportive friends and family were of solo travel for male and female respondents. 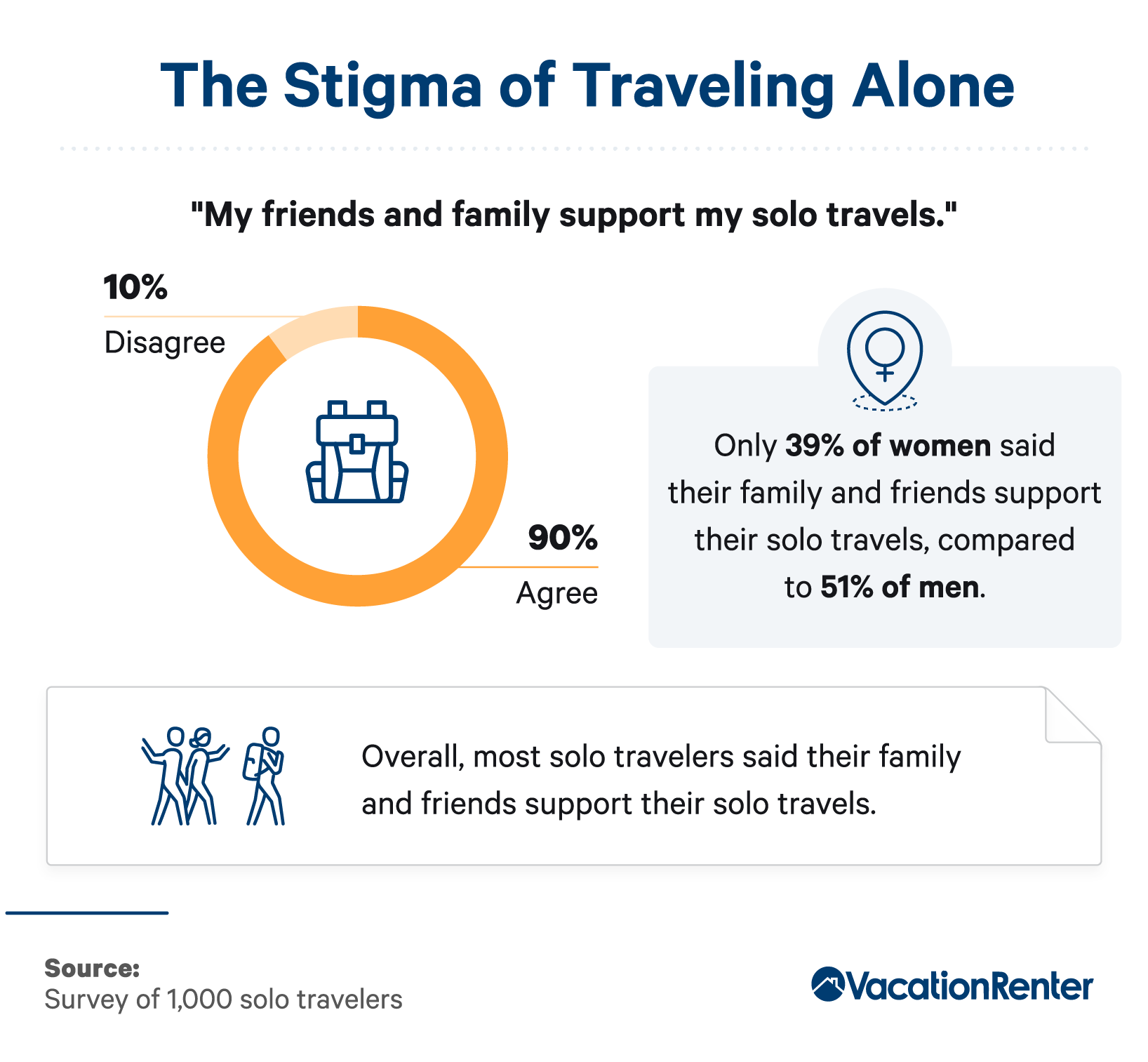 Overall, friends and family were overwhelmingly supportive of solo travel. However, men’s families were more supportive than women’s. Even with this support, intermediate and beginner solo travelers may worry more about their loved one’s opinions due to stigma and are more likely to lie about their travel plans than an advanced one. It’s imperative to one’s safety to not lie about their plans in case something goes awry.

The Risks of Solo Travel

Things can go wrong for solo travelers, just as they can for any traveler. We looked at the most frequently experienced downsides, from safety issues to the loneliness of being solitary in an unfamiliar place. 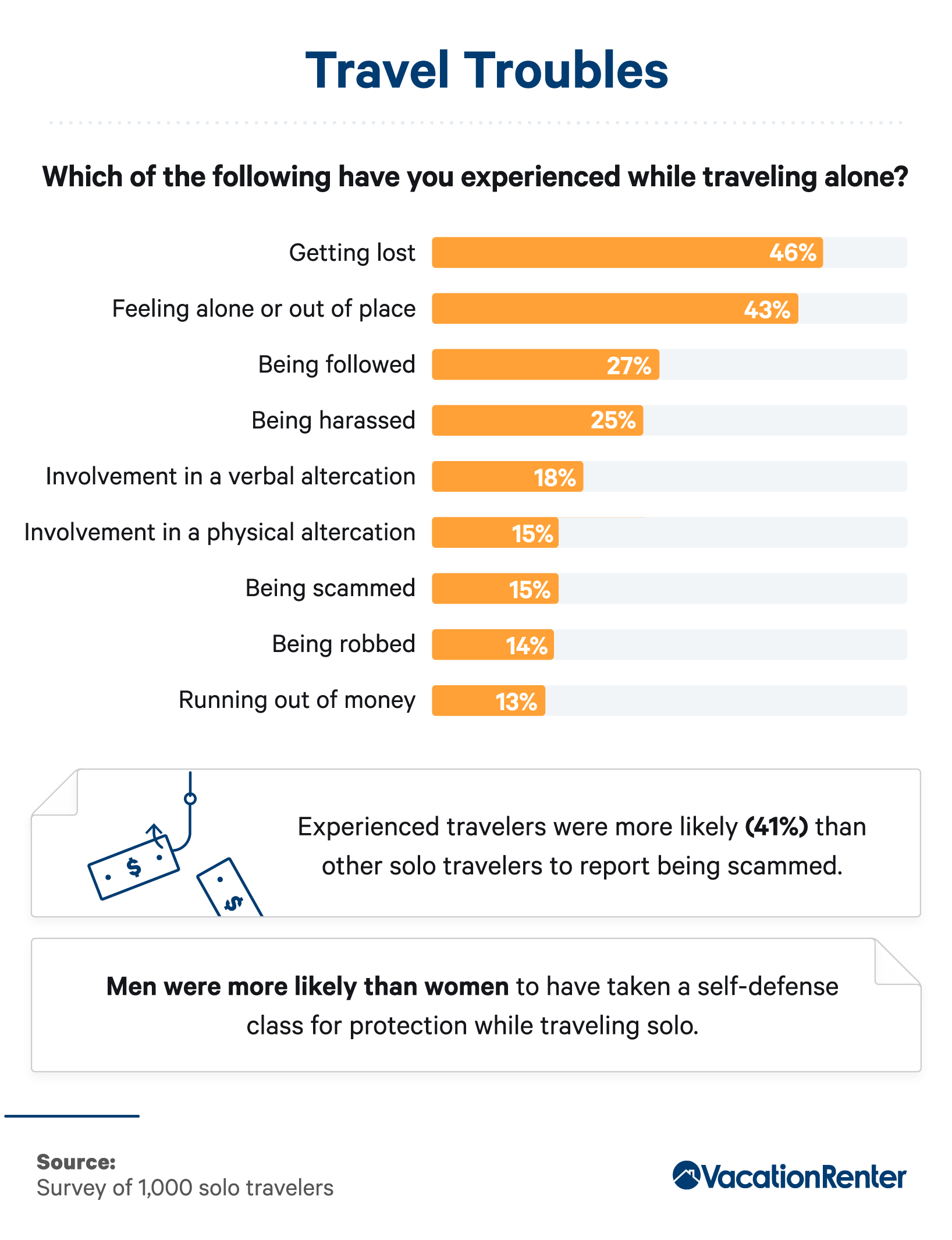 The most common negative experience for solo travelers was getting lost. But being robbed, scammed, or followed were a few of the more dangerous possibilities. Solo travelers most often turned to pepper spray, door locks, and pocket knives as self-defense tools.

Not all destinations are safe for LGBTQ+ travelers. Continue reading to learn more about those that are, according to our respondents. 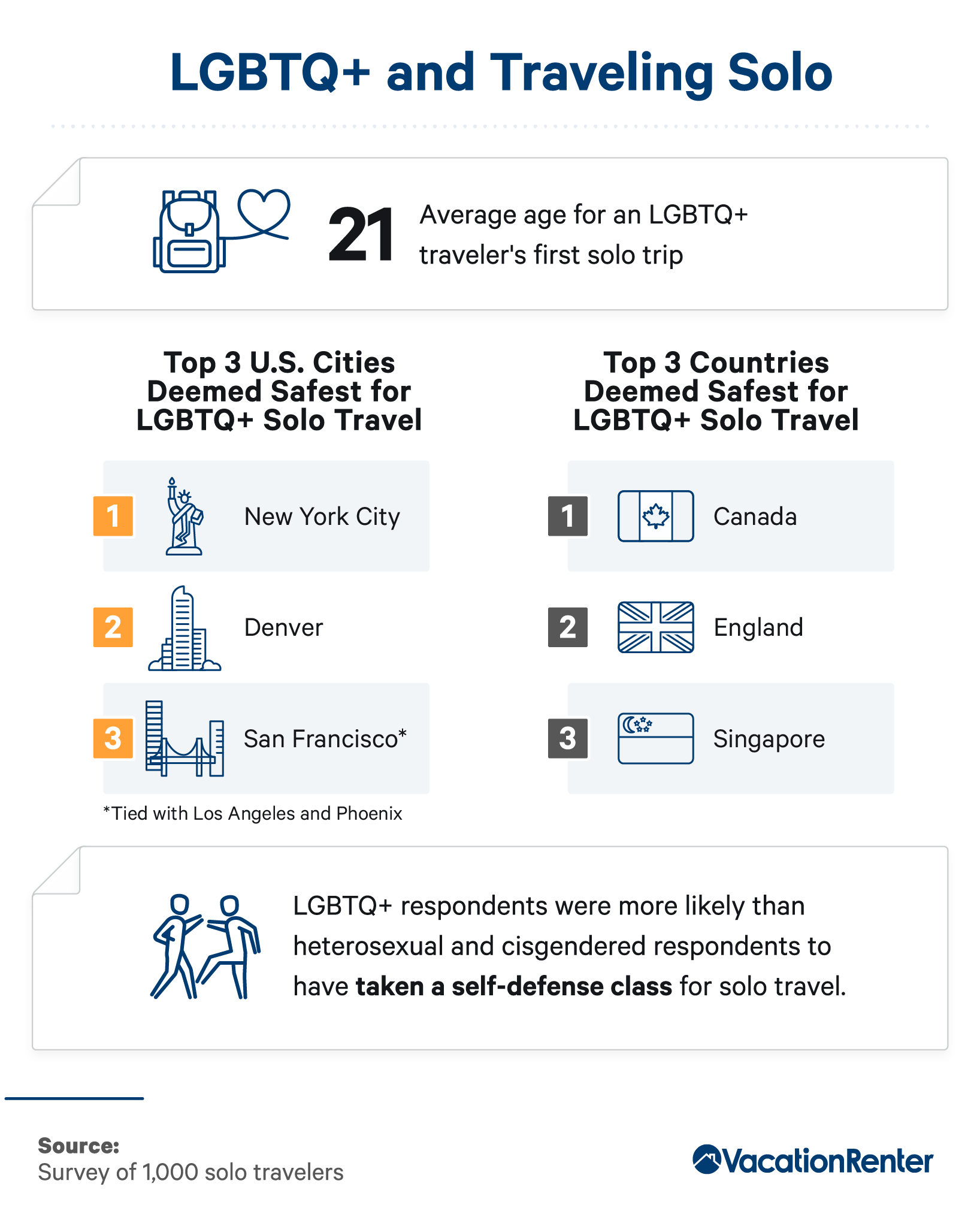 LGBTQ+ solo travelers were more likely to take self-defense classes before traveling, perhaps because they felt more at risk of being robbed or followed than their heterosexual and cisgendered counterparts. They believed the safest U.S. cities for solo travel were New York City, Denver, San Francisco, Los Angeles, and Phoenix. Internationally, they perceived Canada, England, and Singapore to be the safest countries to visit. 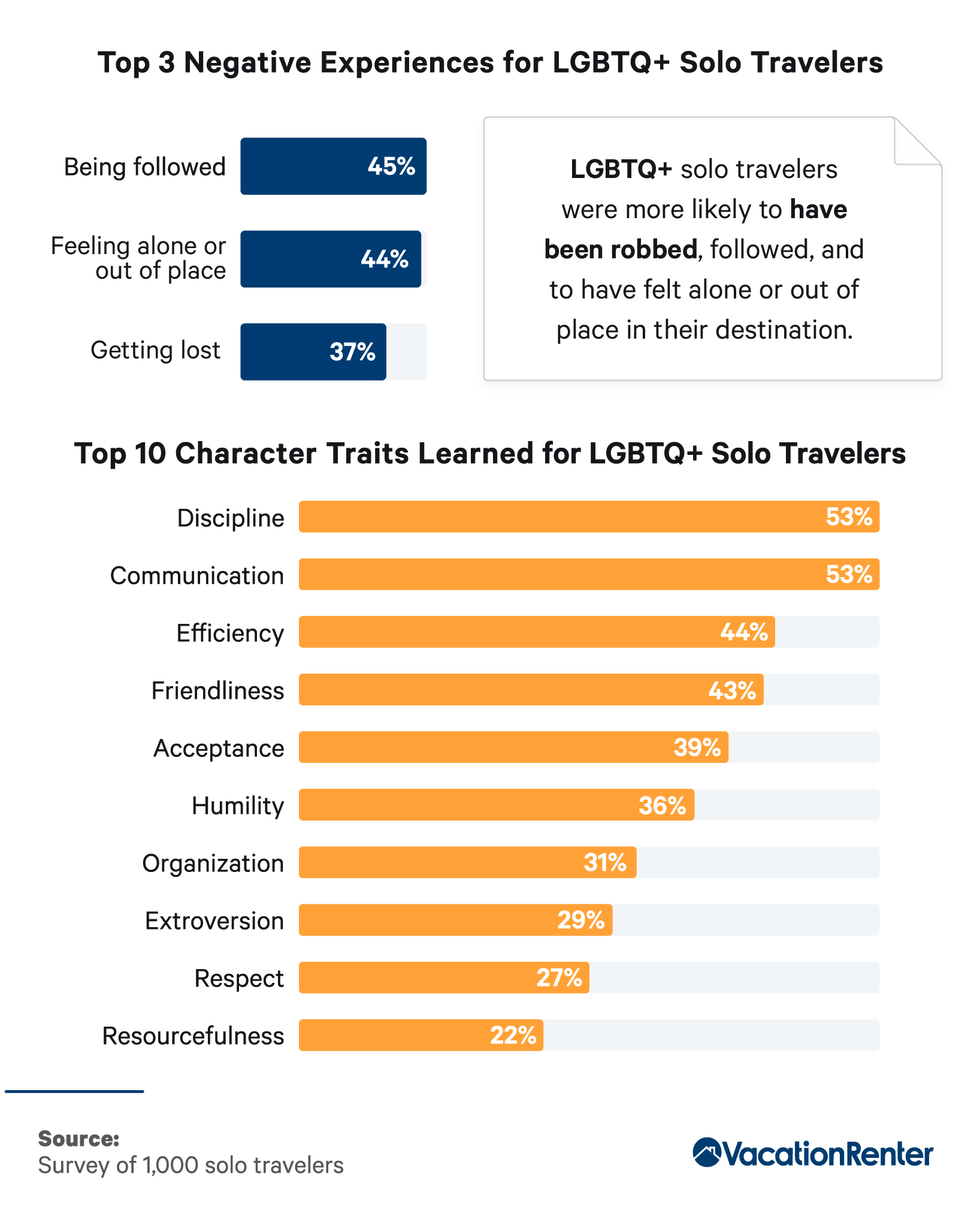 Solo travel leads to considerable personal growth, with LGBTQ+ respondents reporting learning or improving on a long list of character traits as a result. The top two were discipline and communication.

The Value of a Solo Vacation

What makes solo travel so memorable, and how will it help you grow as a person? 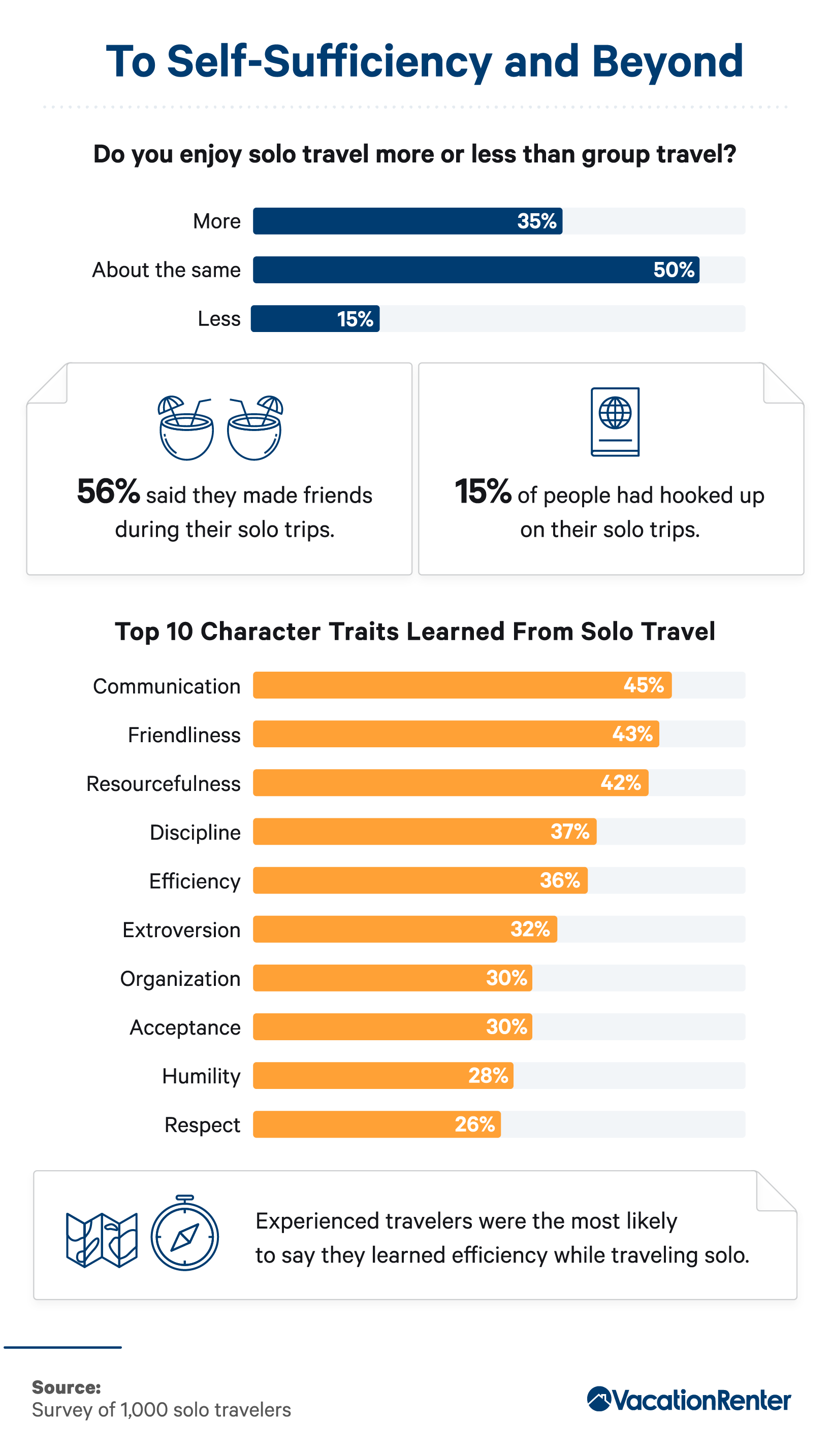 When asked if they preferred traveling alone over traveling with others, most solo travelers replied that they enjoyed solo travel the same — if not more. Without the tether of family or friends, traveling alone gives more freedom to make new friends, or maybe even have an unexpected romantic rendezvous.

Experienced solo travelers reported that, over time, traveling alone leads to increased efficiency. The most common character traits our respondents learned or improved upon were communication, friendliness, and resourcefulness.

Where Will You Vacation Solo?

Want to explore the world but lack a travel companion? Traveling solo can help you embrace your inevitable personal growth.

To ensure your next solo excursion is a positive one, follow current health and safety precautions, budget adequately, and visit VacationRenter for easy, personalized bookings.

The data are not weighted and are based on self-reporting. With self-reported data, there are limitations, such as the over- or underreporting of information as well as exaggerated numbers and answers.

If you think a friend or family member would enjoy our findings on solo endeavors, please feel free to share it for non-commercial purposes. All we ask is that you give us credit by linking back to our study.